As I mentioned a couple weeks ago, there’s a distinct difference between Sound Editing and Sound Mixing. Editing has to do with special sound effects, while Mixing is a focus on the overall audio balance, bet it live on the set or in post-production. I’m certainly no expert in the matter, but that’s always been my understanding. I’m sure at some point someone will tell me that I’ve had it wrong all along, forcing me to reevaluate everything I’ve ever said on the matter, but for now, that’s my story and I’m sticking to it.

More often than not, especially in recent years, the winner of one sound category wins the other. It’s part of why the two slates of nominees are so similar, though last year we had split winners. There’s usually one unique nominee per category, but this year the slates were identical.

We have the same nominees in this category, but that doesn’t necessarily mean the ranking list will turn out the same, and hopefully this will help tell the difference in the categories.

This year’s nominees for Sound Mixing are (psst, tilt your head slightly up):

Julian Slater, Tim Cavagin, and Mary H. Ellis – Baby Driver
In Sound Editing, we focused on the synchronization of the catalog soundtrack, the ringing effect of Baby’s tinnitus, and the effects used for his personal DJ hobby. Much of that doesn’t really apply here, except when it comes to the auditory balance. Baby conducts his life according to the tracks on his iPod, and he constantly has earbuds in. Where the soundtrack comes into play is when he takes the buds out to have a conversation. Do we still hear the music, and does it sound naturally faint compared to the dialogue? Similarly, there are scenes where people question Baby’s ability to grasp a heist plan because of his tinnitus and because he’s always listening to music. The constant cutting between the personal audio and the scene audio when Kevin Spacey describes the plan, combined with the ringing in his ears when he’s called on to make sure he’s paying attention, that’s what we file under Mixing.

I can safely say that the film gets top marks on both fronts. The entire sound experience of the film is part of its fun. We watch the film from Baby’s perspective, and as such we hear sounds as he experiences them. There’s ringing, hollow air, blasting music, and of course, dialogue. The balance might not be ideal to a neutral observer, but as a point-of-view experience, it works at top level. It’s how we get to relate to Baby and empathize with him as a protagonist. The film can’t really succeed if we’re not in Baby’s corner (forgive the Dirty Dancing reference), and hearing the film largely as he hears it is an integral part of that. Ron Bartlett, Doug Hemphill, and Mac Ruth – Blade Runner 2049
No film in this field better exemplifies the difference between Editing and Mixing. Blade Runner 2049 has some tremendous sound effects, which are essential for any sci-fi film. However, much like its predecessor, the overall mix is not that good. Ryan Gosling is very soft-spoken for a great deal of the film, and a lot of the time ambient sounds like wind, rain, and thunder drown out his dialogue. Just by coincidence, I was watching CinemaSins on YouTube today, and the latest entry is for this film. What shocked me is that there’s a quasi-racial slur lodged at Gosling’s character a fair few times (“Skin-job”) that I didn’t even hear when I saw the film. I barely heard it in this parody video making fun of it. If this sort-of “Uncle Tom” insult was meant to be an important aspect of his character, it was lost in the overall din of the film.

And it’s not just a matter of Gosling having something of a baritone, low-register voice. The opening scene is a fight against Dave Bautista, probably best known as Drax in the Guardians of the Galaxy films. He has a very low voice, much lower than Gosling’s, but he projects better, even when he grumbles, so that during their scene, everything Bautista says is clear and concise, while Gosling’s whisper-grunt is barely audible. In a film with a lot of open set locations with presumably great acoustics, the fact that we can’t hear normal voice conversations is a knock against the film. 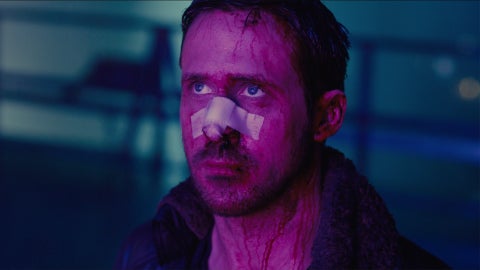 Mark Weingarten, Gregg Landaker, and Gary A. Rizzo – Dunkirk
In the Editing category we talked about the sound effects profile of each of the film’s three storylines. For Mixing purposes, we have to talk about how it meshes with the dialogue, which is ironic, because Christopher Nolan has admitted that he originally wanted to shoot the film without a script, meaning there might have been only improvised dialogue, or none at all.

For the scenes on the beach at Dunkirk, the main challenge was simply making sure the characters could be heard. The naval officer played by Kenneth Branagh was literally standing on a dock with waves crashing in. It was up to the mixer to make sure he could be heard over those waves, to say nothing about the constant bombardment of bullets and plane engines. The same goes for when Harry Styles and the soldiers were moving from boat to boat trying to escape, and constantly being beset by explosions and sinkings. They had to slosh around in water while talking, and again, it’s an extreme challenge to make sure they can be clearly understood rather than being figuratively and literally drowned by the water.

Things were a bit easier on the other two fronts. Mark Rylance’s boat was an enclosed space, so very little from the outside can really intrude on the speech. In Tom Hardy’s plane, the biggest obstacle was making sure he was intelligible while wearing a mask. If Nolan could make it work in The Dark Knight Rises, he can certainly make sure it works here.

Christian Cooke, Brad Zoern, and Glen Gauthier – The Shape of Water
The sound team on The Shape of Water had a similar challenge to that of Dunkirk, but had the exact opposite aim. A lot of the sound design had to focus on water, particularly in the laboratory where the Creature is being held (as well as Elisa’s bathtub). However, in opposition of Dunkirk, because Elisa is mute and the Creature can only make guttural noises, the water sounds have to dominate and create a chaotic motif that transitions to calm, which the team pulled off magnificently.

Because of the speechless nature of the two leads, every other ambient sound is magnified, whether it’s Elisa mopping the floor, the Creature devouring an egg, or (and forgive me if bringing this up makes you uncomfortable) the splashing around as Elisa masturbates in the tub. All of that has to be elevated and drawn out, otherwise the film seems dull, and the audience can lose interest. In the absence of dialogue, something has to take up the mantle, and the sound mixers did an excellent job of engaging the audience through something other than words. David Parker, Michael Semanick, Ren Klyce, and Stuart Wilson – Star Wars: The Last Jedi
It’s hard to judge the ambient sounds in a film like this, mostly because there are very few natural sounds in a space opera. Everything that happens on the spaceships is in an artificial environment, so it’s more an effects-driven design, even things as simple as the pitter-patter of feet on the floor. In outdoor locations, like Luke’s island, there are some things that have to be controlled, like making sure Luke can be heard over the ocean or that he doesn’t echo too much in a cave, but it’s a seemingly minor element, especially when so much time is devoted to artificial sounds like the Porgs, lightsabers, or even Chewbacca. Even one of the most intense moments of the film – Leia’s near-death and Superman-ing back into the ship is an exercise in restraint when it comes to sound mixing, as it’s one of the few times where the film acknowledges the physics of there being no sound in the vacuum of space.

I’m not saying there was a bad job done here. It’s just that there’s nothing extraordinary for me to point to as an example of a brilliant mix. Doesn’t mean it’s not there, it just wasn’t that noticeable, and every major moment I can think of in the film is an example of effects editing, not mixing. I never had trouble hearing dialogue, and the score balanced well, but again, nothing huge to put my finger on here.

As hinted above, the rankings are a bit different this time, though the top two remain unchanged. As for why Star Wars ranks behind Blade Runner despite me knocking it? It’s simply a matter of Blade Runner having a mixing design that registered at all, whereas Star Wars didn’t jump out to me. In essence, a quasi-fail is better than an incomplete.

Next up: Five countries fight for glory and gold, and it has nothing to do with cross-country skiing or curling! It’s the Foreign Language category!

Join the conversation in the comments below? Am I an idiot when it comes to distinguishing these categories? Do you remember something from Star Wars that I missed? Are you mad at me for putting that image of Sally Hawkins in your head? Let me know!