First things first, I must apologize for the lateness of this review. I actually saw this movie a few days ago, but I’ve been dealing with myriad computer issues over the last 48 hours, so I’ve had to focus on that. I can’t even guarantee that my machine won’t crash half a dozen times while I type this out. Fingers crossed.

Anyway, written and directed by master satirist Armando Iannucci – the creator of The Thick of It, In the Loop, and Veep – The Death of Stalin is an absolutely bonkers farce centering on the power struggle in the Soviet Union after Joseph Stalin’s demise in 1953. The gallows humor is on full display throughout the proceedings, as characters are condemned and killed with cheerful apathy at multiple points. And if someone isn’t being killed by the state, others are plotting.

Right away, Iannucci makes an inspired choice with his mostly British and American cast. I mentioned the laughable Russian accents in Red Sparrow a couple weeks ago, well no such problem here, because Iannucci dispenses with that sort of verisimilitude right from the off. Led by Steve Buscemi as Nikita Khrushchev, the entire cast speaks in their natural voices the entire time. The only native accent comes from Ukranian actress Olga Kurylenko, who plays a rebellious pianist.

This choice allows us to dispense with any illusions that this film is based in reality (it’s actually based on a satirical French graphic novel), and just focus on the morbid laughs. Buscemi as Khrushchev is offset by Lavrentiy Beria, masterfully played by Simon Russell Beale. After Stalin dies, the two compete to control the “committee” of Soviet leaders looking to fill the power vacuum, while also dealing with Stalin’s children: the ever-concerned Svetlana (Andrea Riseborough) and the drunken, hot-headed lout Vasily (Rupert Friend), who plays like a surly inebriated version of Sonny Corleone.

The two keys to the struggle are Georgy Malenkov, who officially took over the leadership title. He’s played to the hilt by Jeffrey Tambor as an almost Gump-level dullard, figuratively exposing his puppet strings while he literally tries to tuck in the strings of his girdle. The cast is rounded out by Michael Palin (perfectly suited to some of the Monty Python-esque shtick the film goes through at times) playing Vyacheslav Molotov, who is set to be executed before Stalin dies, yet his loyalty is constantly – and comically – misplaced; and a devilish turn from Jason Isaacs as General Georgy Zhukov, his thick accent making him sound like an English version of Col. Klink. 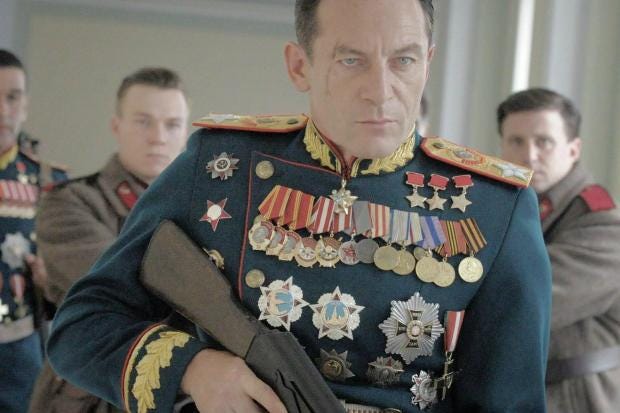 A lot of the humor is very physical in nature. The group trying to carry Stalin’s dying body from his office to his bedroom is a morbid delight. Khrushchev tries to talk to Beria during the state funeral, orchestrating an absurd choreograph to get around Malenkov so he can eavesdrop, and just looking like a fool. There’s a ghastly yet hilarious moment where some prisoners are lined up to be executed, getting shot one by one, until the order to halt executions comes through. The guard simply holsters his gun, walks off, and the remaining prisoners’ faces are priceless.

There’s some absolutely beautiful staging to hammer home the satire. For example, the most important thing in their socialist paradise is to show a united front. So in committee meetings, even when it’s clear that Beria is manipulating the entire situation to elbow Khrushchev out, it is Khrushchev himself reluctantly forcing himself to raise his hand with every motion against him just so that the vote is unanimous. Even when he’s able to turn the tables, he has to have unanimity or everyone’s out. The staging is so precise, the satire so rich, and the action so deliciously absurd that the film has already been banned in Russia, Kazakhstan, Kyrgyzstan, and Azerbaijan, I’m guessing because the not-so-subtle message that every dictator always has someone looking over their shoulder is a bit too on the nose in the former USSR.

This is a small movie with very big laughs, thanks to Iannucci’s deft satirical touch and a first rate performance from the ensemble cast, which goes all in for the humor and cares nothing for authenticity unless it serves the greater joke. You’ll probably only get a chance to see it if you have an indie theatre in your area, but I strongly encourage you to check it out. Laugh your ass off, and maybe learn a bit too!

Join the conversation in the comments below! What movie should I review next? Who’s your favorite Soviet dictator? Do you have any idea how many times I had to look up how to spell Khrushchev? Let me know!

3 thoughts on “In Soviet Russia, Movie Laughs at You! – The Death of Stalin”