In his 1994 debut, Clerks, writer-director-actor-my hero Kevin Smith started his most famous running gag. During a frank discussion about sex, Dante Hicks and his girlfriend Veronica have a fight because Veronica claims a moral high ground, as she’s only had sex with three men as opposed to Dante’s 12 women. However, the punchline is that despite that, Veronica has had oral sex with 37 different guys. It’s not slut-shaming, just a hilarious bit of hypocrisy. The number 37 would pop up throughout Smith’s catalog ever since, an ever-present Easter Egg for fans.

Watching the new film, Flower, I sort of got the impression that the pitch for the film was something along the lines of, “Hey, remember the girl from Clerks who sucked 37 dicks? Well, what if she was the hero, because feminism and stuff?” And as much as I love Smith’s work, and would die happy if I ever got to work on one of his films or write something half as funny, I don’t think it really works as the central conceit of a movie.

Now, that last bit obviously has nothing to do with Kevin Smith, as he’s not involved in the film. That falls to director Max Winkler and writer Alex McAulay. The film isn’t bad. In fact in certain spots it’s tremendous. But on the whole it just falls a little short.

Zoey Deutch (Everybody Wants Some!!) stars as Erica, a spoiled and sardonic So-Cal girl with a unique get-rich-quick scheme. With the aid of her two friends, the 17-year-old seduces and fellates older men, then blackmails them into giving her all their cash so they won’t upload cell phone footage (taken by the other two girls while the marks are, er, distracted) and get them busted for statutory rape. Erica is a girl with a literal daddy issue, as the funds she raises go towards bailing her father out of jail, despite myriad evidence that daddy doesn’t care.

This is a breakout role for Deutch, because while the character of Erica is about as horrible of an image for a millennial teenager as you’re likely to see, the performance itself is outstanding. I made the reference to Veronica’s 37 dicks, but from a character standpoint, Erica is closer to a female Randall Graves: quick-witted, remorseless, and utterly lacking a filter for some hilarious retorts. She’s not a sociopath like the girls in Thoroughbreds, rather a brat who has emotions and a really weird way of expressing them, like offering her new step-brother Luke (Joey Morgan) a beej to make him feel better after a panic attack. 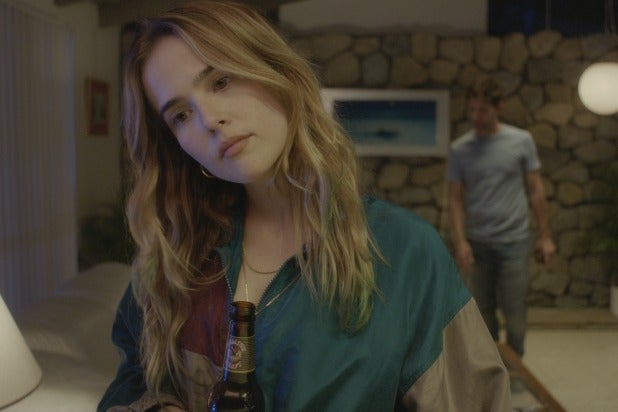 The plot turns into a darkly comic caper when it’s revealed that the reason for Luke’s stint in rehab was because he was allegedly molested by Will Jordan, a former teacher-turned-bowler played by Adam Scott. Erica and her friends have been ogling him for months, referring to him as “Hot Old Guy,” but after hearing Luke’s story, Will becomes their next target for extortion. Adam Scott is a brilliant actor, and one of the funniest men in Hollywood, so he’s seriously cast against type here. It’s also weird to hear him referred to as “Hot Old Guy.” I mean, he’s 44, but he looks like he’s in his late 20s. If teenagers consider that old, the male gender is doomed.

The film, which debuted at the Tribeca Film Festival last April and had a one week limited release before its wide release this week, succeeds when it just deals with snappy dialogue and Erica’s character development. Unfortunately, the film sort of spirals out of control in the third act, with heavy plot twists and character reveals that seem extremely dramatic at first, but then raise more questions than they answer. For example, after the truth about Will and Luke comes out, it throws all of Luke’s past actions into question, particularly if his anxiety is even real, and why he would put himself through such hell if it’s not. The logical inconsistencies pile up to the point where the ending makes absolutely no sense.

There are also some amateurish production mistakes that jumped out to me. When Luke is introduced, the family goes out for dinner. He has a panic attack and crushes a glass in his hand. There are shards of glass all over the table as he gets up and walks outside. Two shots later, when Erica gets up to follow him, there is no glass on the table. In that same sequence, once Erica’s outside talking to him, she tosses the baseball cap she’s wearing to the side, about five feet away. Later in the scene, it’s repositioned to be right next to her when she needs to pick it back up. That’s just entry-level continuity. Also, the characters’ musical tastes seem to really boil down to whatever tracks the production could afford to license, rather than any real character-driven statement of preference.

Again, there’s a good deal to like about this movie, particularly the potential star-making turn of Zoey Deutch. There’s some really funny dialogue, and there’s an apparent admiration for Kevin Smith, so it gets a thumb’s up from me there. But like I said, basing a running gag around a girl who sucks all the dick can be hit-or-miss funny (I usually laugh). However, basing an entire movie around that character doesn’t really hold up.

Join the conversation in the comments below! What movie should I rate next? What’s your favorite Kevin Smith film? Do you consider Adam Scott “old”? Let me know!