Like Avengers: Infinity War, I was fairly confident that if you – the reader – felt any inkling to see Deadpool 2, you’d do so no matter what I say here. As it turns out, I was right, as the “second coming,” as it’s advertised on billboards, has taken the top spot at the weekend box office, toppling the super collaboration while still allowing Marvel to print money.

Thankfully, this movie is absolutely worth your time and dollars!

Yes, the crass, ultra-violent, fourth wall-breaking antihero of the X-Men universe (though we’re not sure which one, these timelines are so confusing) is back, and more irreverent than ever. But more importantly, this film is more story and character-focused than its predecessor, allowing for a better context for all the humor, rather than just references, which are still just as funny as before.

When we last left Wade Wilson (Ryan Reynolds), he had just rescued Vanessa (Morena Baccarin) and was ready to live happily ever after as a mutant contract killer for good. Well, the movie lays waste to that idea within the first 10 minutes, leading to another parody opening sequence (set to a passably good song from Celine Dion) where, among other jokes, the film is directed by “One of the Guys Who Killed John Wick’s Dog.”

Stricken with grief and unable to commit suicide thanks to his regeneration mutation, Wade is taken in by the X-Men, which as before just means Colossus (Stefan Kapicic) and Negasonic Teenage Warhead (Brianna Hildebrand), who now has a girlfriend named Yukio (Shioli Katsuna), making them the first openly LGBT heroes in a Marvel film.

With nothing else to live for, and with haunting dreams about Vanessa, Wade decides to become a trainee and join the X-Men, leading to an encounter with Russell Collins (Julian Dennison), an emotionally troubled young mutant who calls himself Firefist, and is attempting to break out of a cultist shelter for mutant conversion (think “pray away the gay” camp). Deadpool violently intervenes, killing one of the shelter’s workers to protect Russell, leading to the pair getting arrested and sent to “The Ice Box,” a prison for mutants where they’re forced to wear electronic collars that suppress their mutant powers. This leaves Russell as a frustrated, hormonal teenager, and renders Wade into a cancer-ridden burn victim who begs for death.

Meanwhile, in the future (I know that sentence fragment makes no sense, but just go with it), a cybernetically-enhanced soldier named Cable (a wonderfully game Josh Brolin), stands among the ashes of his destroyed home, looking at his murdered family. He activates a device to go back in time to our present, where he goes to “The Ice Box” to hunt Russell, as his future self is the fire fiend who kills Cable’s family. Abandoned by Deadpool in the attack on the prison, Russell turns to the “giant monster” of the facility for companionship, and is taken on by the classic X-Men villain, Juggernaut, and the pair make for the shelter so Russell can kill the administrator. 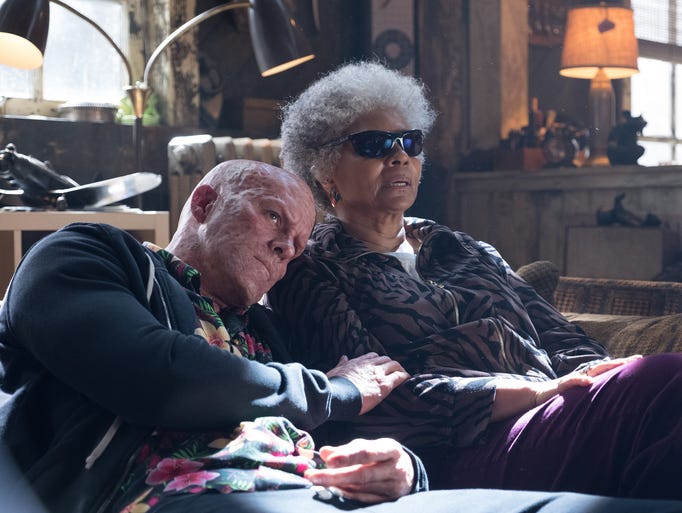 On the other side of things, Wade realizes the error of his ways in leaving Russell behind. So with the help of Blind Al (Leslie Uggams), with whom he’s now living again while he regrows his legs; Dopinder (Karan Soni), who now also wants to be a contract killer; and Weasel (T.J. Miller), who lives up to his character’s name by squealing the entire plan to Cable to avoid torture, help Wade to form his own mutant team, dubbed X-Force, featuring a new hero called Domino (Zazie Beetz), who counts luck as her super power. After a disastrous first mission, X-Force teams up with Cable to stop Russell and Juggernaut, with the understanding that Deadpool will get a chance to save Russell’s life by convincing him not to kill.

Already, this is a much deeper story than the previous film, which was hilarious, but by-the-numbers as far as plot beats. The first film was all about establishing the character of Deadpool, and how bad-ass he can be while quipping to no end. This time, however, the jokes are cranked up to 11, and the film goes for a much more emotional and resonant story about family and friendship amidst all the shit-talking and head-exploding. The high body count of X-Force’s first and only mission is full of gut-busting laughs because the film likes to crassly illustrate how impossible superhero movie physics can be, but there’s also genuine shock value in what happens, because the film took just the right amount of time to get us to care about the superstar cannon fodder. That’s a huge step forward.

The beauty of the first Deadpool was in the ability to subvert comic book film conventions while also paying proper service to said tropes. This faithful sequel carries the torch even further, with some brilliant touches like comparing music from Yentl with Frozen, for a slight dig at Marvel’s corporate masters, but also attempting to draw pathos out the running gag at a climactic moment. Throughout the film we get genuine character moments as Cable evolves from villain to hero (and in the process becoming the first American film hero I can think of to ever repeatedly use the word, “cunt” in a film – progress), and then a slightly cynical end credits sequence that threatens to undo all of it, because the core thesis of this series is a giant middle finger to expectations, be it in cinematic format or for the audience itself. Also, the film just gets massive points for relegating the usual gratuitous Stan Lee cameo into a graffiti mural on a wall in an establishing shot before an action sequence.

If you’re looking for some grandiose statement of franchise prestige, well, look fucking elsewhere. Deadpool 2 does exactly what it sets out to do, which is up the ante on the action and the humor now that Marvel knows it’s a moneymaker and can devote more budget to it this time around. But that extra studio heft doesn’t saturate the story or the comedy to the point of self-parody or boring formula. Ryan Reynolds et al simply say, “Hey, thanks for the money, now let’s make some even bigger chimichangas!”

Join the conversation in the comments below! What film should I review next? Will there be a third film in the series? Is there a better song lyric in existence than, “Holy shitballs!”? Let me know!