There are shades of two of my all-time favorite movies on display in the father/daughter musical dramedy, Hearts Beat Loud, directed by relative newcomer Brett Haley and starring Nick Offerman and Kiersey Clemons (Diggy from Dope). The first is High Fidelity, where John Cusack plays a wonderfully cynical record store owner who must discard his youthful flaws in order to have a meaningful relationship with a woman.

There were several moments during this film that I imagined Nick Offerman’s Frank Fisher as Rob Gordon 20 years later. He’s still a music snob, and he’s still something of a cynic, though his life is enriched by fatherhood, which makes him see the good in things and be a bit more happy. But he still has issues when it comes to women – both in relation to his daughter and his love interest/landlord, Leslie (Toni Collette in consecutive movies, though this one has far fewer headless corpses floating around) – and he still has growing to do despite entering the autumn of his years and becoming something of an empty nester. There are hints of midlife crisis, but not so much that they become trite and cliché.

The second all-timer for me that jumped to mind immediately was Once, one of the most beautiful movies I’ve ever seen, and the only truly transcendent movie musical of the 21st century so far. For those who haven’t seen it (or its Broadway adaptation), it’s the simple story of an Irish musician and a Czech flower girl who literally make beautiful music together, forming a rapport and a platonic love story better than any contrived Hollywood romance put together in the last few decades. Starring Glen Hansard and Marketa Irglova, the music is made naturally, and in service of the “Guy” (Hansard, there are no names to the main characters) making a demo CD that he can sell to get a record contract when he moves to London.

Similar themes abound in the form of Frank’s daughter, Sam (Clemons), who begins the film by spending her summer studying and taking early college courses in pre-med before moving from Brooklyn to UCLA in hopes of becoming a doctor. Frank, being a former professional musician with Sam’s late mother (can’t have a father/daughter story without a dead/terrible/absentee mother after all!), sees Sam’s musical potential and encourages her not to abandon her art, facilitating “jam sessions” on a regular basis. It’s basically the one respite he has in his life, between his store failing and his aging mother (Blythe Danner, basically just there for a bit of treacle) getting herself into trouble on a regular basis as a result of early-onset dementia.

It is in one of these jam sessions that Frank and Sam record the film’s title song, which is really well orchestrated. If there’s a complaint, it’s that it relies too much on loops and computer recording as opposed to live performance, but a lot of that boils down to there only being two of them to write, sing, and play all the instruments. If it works for Beck, it can work for them. Sadly, in inviting comparisons to Once, you have to be held to that lofty standard, and as much as I like the song, “Hearts Beat Loud,” to the point that I wouldn’t be surprised if it gets an Original Song nomination next year, it pales in quality to just about anything in the Once soundtrack. And again, that comes back to editing/looping versus live performance.

Once opens with Glen Hansard standing on a street, strumming a beat-up guitar and belting a heart-wrenching ballad at the top of his lungs. The film’s Oscar-winning song, “Falling Slowly,” is an organic melding of music and cinema as Hansard and Irglova assemble the song on pure guitar and piano in the middle of a music shop, their harmony in instrument and vocals an indicator of their instant bond.

By contrast, “Hearts Beat Loud” is generic chords and loops, coupled with some amazing vocals by Clemons. Offerman more serves as the engineer/backup instrumentalist. A lot of the charm in the scene comes more from the editing and the joyful quality time between father and daughter rather than the atmospheric quality of the song itself.

Anyway, back to the story before I start sounding harsh against what really is a lovely song. Frank, in an effort to encourage Sam and maybe a selfish desire to keep her around, surreptitiously uploads the song to Spotify under the artist name, “We’re Not a Band,” which is a direct play on Sam’s playful dismissal of her dad, but might also be an indirect dig at most modern indie and alternative acts. The song becomes a viral hit, instantly elevated onto the “New Indie Mix” on the streaming app (which also includes “Put Your Money on Me” by The Struts, one of my favorite songs from a couple years ago), and in no time Frank is going all in on his daughter’s chances for fame, buying a Les Paul guitar for himself (YAY!) and a sampler sound board for Sam (BOO!).

Maybe I’m getting too old, but there’s a lot of stuff in this film that just speaks to the overall laziness of the current generation of “music.” Frank and Sam record on loopers and samplers (in a bigger heartbreak, the electronic/computer devices literally sit on top of a closed full-size keyboard and a piano goes unused in the background). The only path to success is through viral fame on apps. The quality of the song doesn’t matter, only the fact that it plays in a Starbucks knockoff. And in true Brooklyn hipster fashion, the film goes out of its way to try to establish indie cred, but even then it’s uneven. The film opens with Frank watching a video of Jeff Tweedy while ignoring a piss ant customer who brags about buying the album he wants on Amazon, and Tweedy himself makes a cameo towards the end, only to NOT stick around for the actual live music performance of Frank and Sam. Similarly, Sam’s girlfriend Rose (Sasha Lane of American Honey) insists that Sam listen to Mitski’s “Best American Girl.” It’s that sort of shallow lip service to indie music that comes off being more annoying than endearing. 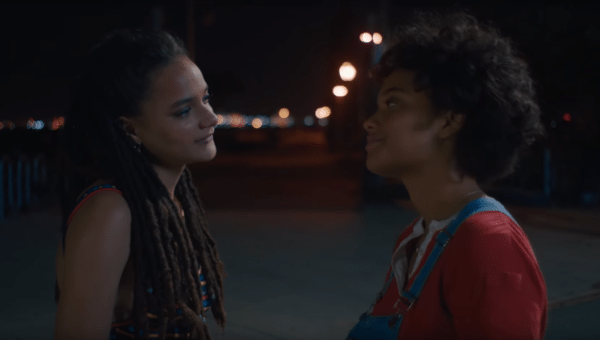 Still, there’s a good deal to enjoy. “Hearts Beat Loud” is the best original song of the film, but the other three have merit as well, particularly the love song, “Blink (A Million Miles)” that Sam writes for Sasha, a hint at the bittersweet nature of their romance, akin to Hansard and Irglova in Once. It’s also just nice that Sam’s sexuality is a complete non-issue. When Frank first reads the lyrics, he senses something’s up, so he asks Sam if she has a girlfriend, or more surprisingly, a boyfriend. There’s no conflict to it. Frank knows his daughter is at least bisexual, if not fully lesbian, and there’s no issue to it whatsoever. It’s a refreshing look at representation, without having to shoehorn a hollow bit of emotional drama. It’s just understood as the norm.

Also, the comic relief of the film is its own form of wonderfully weird entertainment. Frank’s best friend is his bartender, Dave, played by Ted Danson. More than 25 years removed from his most famous role, Danson is less Sam Malone and more Jimmy Buffet with a liquor license, and he dispenses his sage advice while drinking and reminiscing about good weed. It all works spectacularly.

But really, everything boils down to the relationship between Frank and Sam, and it succeeds. The two have a natural chemistry, and play off each other extremely well. In the end it’s all a bit too sweet, too schmaltzy for the overall narrative. At times it’s so sugary that the audience needs an insulin shot for the collective diabetes the film gives them. But it’s all more than forgivable, because the relationship feels organic, and because the film doesn’t engage in fantasy wish fulfillment, giving everyone the proper “happy” ending, rather than the unnatural Hollywood ending that some audiences may come to expect.

And yeah, if this is Rob Gordon all grown up and playing Glen Hansard to his daughter’s Marketa Irglova, it turns out alright. They do end up making beautiful music together – though admittedly not really my taste, but I did catch myself mouthing along to the lyrics at a few points – and the proper lessons are learned. It’s a bit derivative, and from my old man, “real music” standpoint it can sometimes come off lazy, but that’s all ancillary to a really well worked relationship between a parent and a child in the modern age.

Join the conversation in the comments below! What film should I review next? What’s your favorite modern musical? What is it with the kids these days, with their music, and their makeout parties? Let me know!