In preparation for Eighth Grade, written and directed by comedian Bo Burnham, my girlfriend and I watched his 2016 special, Make Happy. It was weird, confusing, and utterly brilliant, because he was able to combine stage effects, music, and jokes to send up everything from pop culture to technology to politics to race relations. In particular, there were tremendous moments like his song, “Kill Yourself,” which jokingly suggests suicide for people who draw self-worth and inspiration from pop ballads from the likes of Katy Perry; a Kanye-esque auto-tuned number where he complains about first world problems like not being able to reach into a Pringles can or having an overstuffed burrito; and having children’s cartoon voices call him a faggot from offstage.

So imagine my surprise when I saw Eighth Grade, which basically takes all of those elements, and presents them unironically, in the form of an insecure teenager that we are somehow supposed to root for. Now, I concede right off the bat that I’m probably not the target audience for this film, as I have never been a teenage girl. It’s very possible that I just don’t get any of this, as the film has a 99% rating on Rotten Tomatoes and the highest per-screen average gross of any film so far this year (passing Isle of Dogs last weekend). But sadly, this film just did not resonate, and part of it is because the lead character, while charming and occasionally relatable, just didn’t have anything to latch onto.

Young Elsie Fisher – previously the voice of Agnes in the first two Despicable Me films – stars as Kayla, a fairly typical-looking 13-year-old finishing up her last week of middle school. Every day she posts videos on YouTube, attempting to dish out advice to the interwebs, but never gaining a viral foothold. It’s hard to imagine why, given that her wisdom on “being yourself” is literally summed up with her saying, “The hardest part, um, is that it’s not easy.” She also signs off every video by saying, “Gucci!” Truly the world suffers without her insights.

From those opening moments where she talks into her Macbook before burying her head in her phone, I’m already turned off. Rather than being a sympathetic lead, she immediately comes off as a spoiled, clueless kid, moping about problems that aren’t really problems. She is heartbroken to be named “Most Quiet” by her classmates for the 8th Grade superlatives (which even in the name, superlative, is meant to be a compliment rather than an insult – I mean, at least they know your name), and takes it as a personal affront that her videos have zero views, which is almost logistically impossible. I mean, why wouldn’t you watch your own videos, if nothing else to prime the pump and get it trending, or just to make sure it uploaded correctly? How little confidence do you have in your own advice if you can’t listen to it yourself once in a while?

Kayla is seemingly on a constant quest for popularity or validation, but there’s never any basis as to why. There’s no motivation for any of her actions. Again, this may be just me not getting it, but shouldn’t there be an established reason for her journey? Maybe that’s the real life of a teenage girl. I don’t know. But at least from a moviemaking perspective, from a competent writing perspective, the audience has to know why something is happening, or we can’t connect to it.

Anyway, one of the few ways in which the film does reach me is in the idea of loneliness and a quest for friends. One of the most positive moments is when Kayla shadows Olivia (Emily Robinson, best known as the young Rose on Transparent), a high school senior, to get a feel for what her next step will be. Olivia is cool, and has a close knit group of friends, which is all Kayla really wants. Olivia assures her that in high school, these things will just happen. That was a great moment, because yeah, it really is just a random thing. One of my best friends in high school I literally met because during our freshman year orientation, I walked in the line near him because he looked normal and I was entering a new district and a new town. I made a snide joke out of the side of my mouth when a teacher tried to playfully intimidate us, and he laughed. The next morning, in my alphabetically-sorted homeroom, his desk was immediately behind mine. A rapport was instantly formed. It really is that random. 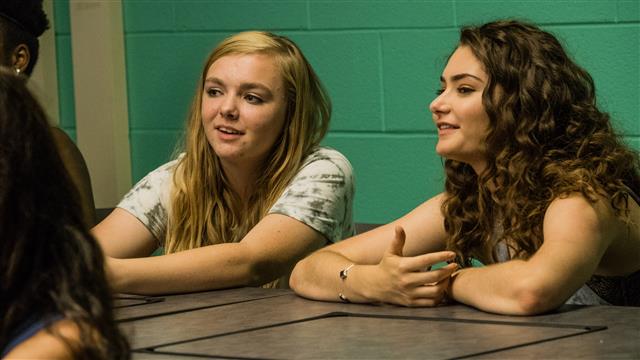 And to be fair, there are a few moments that are universally relatable. The first is a birthday party that Kayla attends because popular girl Kennedy’s (Catherine Oliviere) mom forces her to invite Kayla. At the party (at a huge fucking house – again, the problems of suburban white kids), Kayla has a panic attack about people seeing her in a bathing suit. I immediately felt her terror. It’s especially poignant when she’s the only girl there wearing a one-piece suit, and all the other girls are basically Instagram models.

But apart from that, there’s basically no substance to Kayla’s character. She’s way too obsessed with social media (her triumphant calling out of Kennedy is rooted in not getting a follow back on Instagram), she wakes up every morning with her phone playing one of the very songs that Bo Burnham wrote “Kill Yourself” about, she listens to terrible EDM, which is cranked up to maximum volume in between scenes, drowning out dialogue, and also whenever Kayla sees her crush, Aiden (Luke Prael). Literally every time her lady boner pops up, our ears are abused. It’s almost sexual assault, given the context, and that’s before we get to the actual horrid, ill-advised sexual assault scene, which seems shoehorned into the third act in a desperate attempt to give Kayla a second dimension.

And again, all of this boils down to a cognitive dissonance between the character and the audience. She has no real problems, but we’re meant to feel sorry for her. She’s an utter phony (going through a complete makeup routine before posting a selfie on Snapchat saying she “woke up like this”). She basically has no interests, except for Rick and Morty, which is only brought up in one of the closing scenes (a scene where the staging made me anticipate the reference), another of the rare bright spots in the film. But most importantly, she never seems to grasp the concept that people are allowed to not care. She’s so offended that no one watches her videos, but never thinks for one second that it could be because she’s not saying anything worthwhile or compelling. Happens to the best of us, but it’s not the basis of a good movie. And for what it’s worth, Fisher does play the role well, it’s just not a character I could ever root for.

This was very much not the movie I anticipated from such a broad-minded comic as Bo Burnham. There was only one scene that truly felt like it was his, and that was a school shooting drill that the student body treats as blasé and boring. That is pure Burnham, the idea of school shootings being so commonplace that middle schoolers would roll their eyes at shelter-in-place drills and barely pubescent kids would brag about being able to take down a gunman with ease.

So yeah, I basically hated this movie. But here’s where I might surprise you a bit. I still think it should be seen. Again, I admit upfront that maybe my perspective is just way the hell off, and it may turn out to be magical and resonant to you. And honestly, I would still recommend this because it’s the type of “bad” movie that we should have. This is as bad as movies should get. But even when I don’t like it, I acknowledge the effort and the creativity behind it. It just didn’t work for me, but it might work for you. Typically, with my grading system, the basic philosophy is that anything from an A to a B is something you should see in a theatre, a B- to a C can be seen in niche situations or on home video, and a C- and below should be avoided. But this is an exception to my rule. I didn’t like it, but it’s very possible you will, and even if you don’t, I’d rather watch this 10 more times than recycled Hollywood trash like Jurassic World: Fallen Kingdom even once more.

Join the conversation in the comments below! What film should I review next? Am I being too hard on this film, or did I miss the point? Am I the only one who thought the Szechuan Sauce for McNuggets was overrated? Let me know!