In May of 2014, a young girl in Wisconsin was stabbed multiple times and left for dead by two of her classmates. Thankfully, she was found in time and was able to recover. The two former friends, who are now institutionalized, tried to murder her to appease an internet horror creature called “Slender Man,” created for a fanfiction contest by someone using the alias, “Victor Surge.” A simple menace, Slender Man is a tall, thin, faceless demon, who occasionally has tentacles growing out of his back, and stalks children to take them away, often by their own choice, similar to the Pied Piper of Hamlin. After the character was created, a growing mythos online evolved into a sort of cult of personality, where Slender Man was admired and outright worshiped by some. This is what led to those two 12-year-olds in Wisconsin nearly killing their friend.

The story – such as it is – follows four teenage friends: Hallie, Chloe, Wren, and Stimpy, er, I mean, Katie. After overhearing some boys at their school joking about summoning the Slender Man but not including them, they take it upon themselves to participate in the “game” of calling out the demon, who creeps about in the woods and can sometimes alert people to his presence with the sound of cicadas. They then watch a viral video about Slender Man “sightings.”

So right off the bat, this movie has already ripped off three horror classics. Accidentally summoning a demon based on occult writings? That’s just The Evil Dead. A monster with an insect vibe? Candyman all the way. Getting creeped out and hunted after watching a weird video? Well, before you yawn, you think of The Ring. Within the first 15 minutes, you’ve already been told that this is just derivative bullshit.

Anyway, on a school field trip to a cemetery – you know, like all high schools do – Katie (Annalise Basso of Bedtime Stories) becomes paranoid and wanders into a nearby forest, never to be seen again. Her disappearance freaks out her friends, who don’t want to let on that they might be indirectly responsible for Katie vanishing and in all likelihood dying.

What follows from that point are a bunch of bad horror movie tropes and unfocused filmmaking which basically throws everything at the wall to see what could stick. Wren (Joey King from The Conjuring) does research and contacts an online friend of Katie’s who knows about Slender Man. This leads her to drag Hallie (Julia Goldani Telles of The Affair) and token black character Chloe (Jaz Sinclair from Paper Towns) into the woods to offer up “sacrifices” of things they love (basically trinkets from home) in order to get Katie back. Of course, Chloe can’t follow a simple instruction to remain blindfolded (cause that’s a rule, I guess) during the ritual, and she encounters Slender Man (Javier Botet), and is later driven insane. Further experiments lead to more encounters for the group, all of which go just about as well as you’d expect. 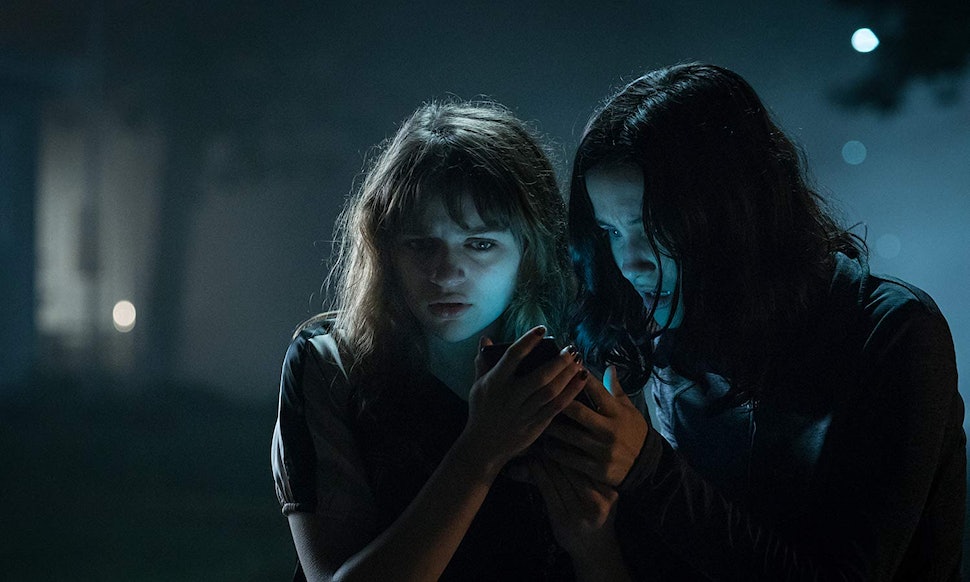 The problem is, none of it is even remotely compelling, much less scary. Director Sylvain White, who mostly does TV but has the illustrious Stomp the Yard and the straight-to-video sequel I’ll Always Know What You Did Last Summer to his name, must have a deep history as a carpenter, because his main actresses are essentially blocks of wood. They have two levels: stilted dialogue and screaming. The only half-decent performance comes from Kevin Chapman, best known as Lionel Fusco on Person of Interest, who plays Katie’s distraught, alcoholic dad, and even then, his appearance is basically wasted in service to two cheap jump scares (of the whopping 26 I counted over the course of the film’s 95 minutes).

The film is tinted a deep shade of blue, to the point that Christopher Nolan (who also tints blue due to his colorblindness) would say it’s a bit much. There is no sense of time and scale on anything that happens. For example, after Chloe goes nuts, Wren talks to Hallie at the end of the school day, insisting that they check on Chloe. Hallie protests, saying she has track practice, but Wren guilt trips her into coming along. In the very next shot, they’re at Chloe’s house, and it’s the dead of night. Do they live in Alaska? Does it take four hours to walk to Chloe’s house? Did they not go straight there? Who knows? All we do know is that all these suburban teens somehow live really close to some ominous-ass woods. Anyway, Hallie doesn’t believe what’s happening before her very eyes, and she bails on Wren to go make out with a boy she likes. Then she dissects an eyeball in class the next day, because… spooky, I guess?

White also can’t settle on a photography style. In any number of sequences, he’ll use static shots, shaky cams, steady cams, and spasm effects ripped straight from every bad horror movie of the last 15 years. Hallie herself literally jumps out of nightmares within nightmares within nightmares. I was joking about Christopher Nolan at first, but let’s just add Inception to the list of knock-offs. And of course, we can’t have Sony distribute a movie without some horrible product placement. In this case, all the girls have Sony smartphones and Slender Man uses video calls as part of his stalking. One, no phone in existence can show video of higher quality than the actual film. Two, you can literally see the pre-recorded sequences shift space within the phone, as the editors couldn’t be bothered to sync up the image. Again, LAZY!

Worst of all is that, despite all these flaws, there was a chance – A CHANCE – that the film could have reached for some poignancy, given what happened in Wisconsin. The girls summon Slender Man because of peer pressure. That could have been addressed on a deeper level. Boys started the game but the girls end up paying the price. There’s a whole lot that could have been explored in the realms of gender bias and victim shaming. Slender Man himself is a viral internet creation, and half the shit that goes down happens because these kids can’t pick their fucking heads up from their screens. The elements are there, FUCKING USE THEM!

But no, that would have required effort. So here we are, four years removed from a horrific attack, exploiting the object of someone’s suffering for cheap profit, without even a hint that anyone was even trying to make something worthwhile out of it. This movie is beyond tasteless, lazy, derivative, and unconscionably bad. And yet I’d wager dollars to donuts that it gets a sequel, because like these idiot teenagers, we just never learn.

Join the conversation in the comments below! What film should I review next? What’s the worst horror movie you’ve ever seen? What the fuck is a creepypasta, anyway? Let me know!

2 thoughts on “When Art Imitates Life, the Victims and the Audience Deserve Better – Slender Man”