It’s been a really good year so far for movies that bring racism to light. We’ve had pantheon films like Sorry to Bother You and Blindspotting, and even middling fare like Gringo can still get the point across with some degree of skill. Now we have Spike Lee’s latest joint (I’ve always loved that term), BlacKkKlansman, an amazingly stylized procedural that only today’s current socio-political climate could make you believe actually happened, or as Spike puts it, “Some fo’ real, FO’ REAL shit!” Seriously, it’s easy to see how this film competed for the Palm d’Or at the Cannes Film Festival this year, and how it won the Grand Prix.

John David Washington (son of Denzel, heretofore seen in HBO’s Ballers) stars as Ron Stallworth, the first black police officer in Colorado Springs, back in 1979. After encountering some systemic racism within the department, he’s given a chance to prove himself as an undercover detective, sent to observe a speech by former Black Panther Kwame Ture (Corey Hawkins of Straight Outta Compton) as a potential disturbance of the peace and incitement to violence. There he meets black student union leader Patrice Dumas (Laura Harrier from Spider-Man: Homecoming) and becomes smitten. After the rally, a racist cop in Stallworth’s department pulls over Patrice and Kwame, threatening and assaulting them.

Some time later, Stallworth takes it upon himself to contact the local chapter of the Ku Klux Klan after they post an ad in the newspaper. He makes contact with a man named Walter (Ryan Eggold of The Blacklist), who begins recruiting him into “The Organization.” Obviously, being a black man, he can’t meet them in person, so a fellow detective named Flip Zimmerman (Adam Driver), who is white but Jewish, is enlisted to act as Ron in face-to-face meetings. Both Flip and Ron face dangers as they dig deeper into the Klan, particularly from aggressive members like Felix (Jasper Pääkkönen), dullard redneck Ivanhoe (Paul Walter Hauser of I, Tonya), bomb maker Walker (Nicholas Turturro, brother to John), and Felix’s wife Connie (Ashlie Atkinson), who is a delightfully cheerful housewife who can’t wait to do her part to kill some blacks. Seriously, she and Felix have one of the most disturbing scenes of pillow talk I’ve ever seen.

On top of everything else, Ron is able to make contact with then-Grand Wizard of the KKK, David Duke, played here by Topher Grace with the same high-pitched snivel voice that he used throughout his time on That 70s Show nearly 20 years ago (God I’m old). Ron’s “white voice,” for lack of better term (sorry Boots Riley) is so convincing that Duke is comfortable enough to say a litany of horribly racist shit without fear of reprisal.

All of this on its surface is enough to make a compelling comedy or procedural thriller. But this is Spike fucking Lee we’re talking about here. You know he won’t just settle for entry-level fun. Throughout the film his deft cinematic touches are on display, from spotlit faces in Ture’s crowd nodding along to the thought that black really is beautiful, to some great use of music, to the knowing homages and acknowledgments of the importance of film. The movie itself opens with the famous triage scene from Gone with the Wind, leading into Alec Baldwin making a Klan propaganda video but constantly flubbing his lines. Ron and Patrice have enthralling debates about Cleopatra Jones and other blacksploitation films, exploring the true purpose of representation in cinema. And of course, in a wonderfully juxtaposed sequence, we get an old black man (Harry Belafonte) talking about a friend of his being lynched while the Klansmen have a Rocky Horror-esque audience participation screening of Birth of a Nation, the very racist film responsible for the Klan’s resurgence and the poor boy’s lynching in the parallel story.

But most importantly, Lee makes this film work because he uses it as a platform to give lie to bullshit. The film was released on August 10, just before the one-year anniversary of the Charlottesville Incident, where white supremacists marched in the streets with torches, and killed a woman protesting them. Afterward, the President of the United States went on national TV and proclaimed there were “very fine people on both sides.”

Lee uses Ron Stallworth’s story to put that absurd theory to the test, and surprise surprise, it’s patently false. While Stallworth’s memoir – the basis for this film – is very by-the-numbers and even arguably dull according to critics, Lee is able to show the differences between the two sides masterfully. The black activists, even the more extreme ones like Ture, talk of revolution, but aside from one posturing line about arming yourself, they are not violent. They are loud, they are arguably intolerant to a certain degree, but they are inherently peaceful, only raising a fist in symbol, to alert the world that they’re prepared to defend their lives and their dignity. Their slogan (apart from juxtaposed “White Power”/”Black Power” chants) is “All power to all the people,” not “All power to black people.”

On the other side, however, the best you’ve got is Walter, trying to put as nice a face on “The Organization” as he can, following David Duke’s lead. Everyone else is eager for some killing, and it’s appropriate that some of the Klansmen (especially Felix) are portrayed at an almost cartoonish level of villainy. White people have used parody, stereotypes, and minstrel depictions to inaccurately paint blacks as a mongrel race for centuries. It’s only fair that these hateful, violent people get the same treatment for once. 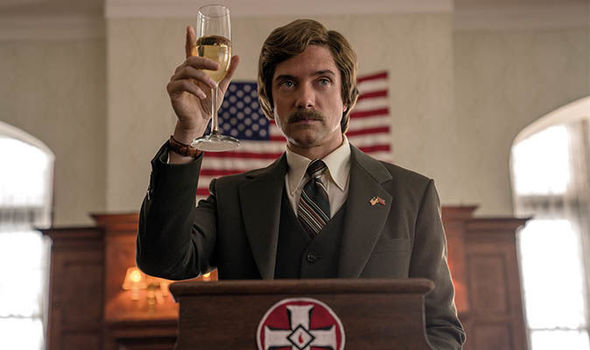 Really, all the performances are ratcheted up, to the point that my girlfriend remarked that it seemed “too thespian-y” after we watched it. It’s true, but I also think it’s necessary in this case. You need everyone overacting, if nothing else than to let the audience enjoy the film rather than be terrified of it. We’re living this nightmare of emboldened racism 24/7. So why not have a couple of hours where it’s depicted for the farce it is and should be treated as?

Lee doesn’t stop there, though. He does take some pointed shots at modern politics in some of the dialogue, and while most of those are directed at Donald Trump and his ilk, even the less guilty are still called on the carpet. David Duke talks about stopping blacks from advancing in society so that they can take America back, and “make it great again.” At another point he leads a chant of “America First,” which was John McCain’s 2008 campaign slogan, and was turned into a white nationalist mantra in 2016 via Trump. Alec Baldwin’s recruitment movie talks about “super predators,” a very unfortunate choice of words by Hillary Clinton when her husband passed his crime bill in the 90s. Hell, even though the film takes place in 1979, the church where Duke initiates new Klansmen still has campaign posters for Nixon/Agnew’s reelection in 1972.

If there’s a flaw to be had, it’s in the early structure of the film. Stallworth goes from joining the department with the entry-level duties of working the records room (and dealing with racist cops who request files on “Toads,” a racial slur I confess to have never heard before), to going undercover once, to being transferred to the investigative unit while still a rookie and being able to conduct his own investigation into the Klan on his own initiative. There’s also a pretty quick rapport developed between Stallworth and Flip based really on nothing.

I feel like we could have used a couple extra scenes of exposition to make these early moments flow better. For example, after going to Kwame Ture’s speech, Stallworth asserts to the chain of command that there’s no real cause for concern of violence, and Flip backs him up. It would have been nice to see Stallworth thank Flip, complete with an “I don’t care about you, just the truth”-type line from Adam Driver, then maybe a suggestion from Stallworth that if he’s going to be used to expose extremist blacks, why not also apply it to extremist whites before he cold-calls the Klan.

But apart from that, there’s really not that much to criticize. This is quite possibly Spike Lee’s best film this century. It’s better than Chi-Raq, it’s better than Inside Man, and it may even be better than 25th Hour. This film is poignant, stylish, and another necessary entry into this year’s array of racial exploration films. It’s a shame that the Academy hates him (and he hates them right back most of the time), because honestly, this is worthy of a Best Director nomination come next year.

Join the conversation in the comments below! What film should I review next? What’s your favorite joint? While I do not condone violence, how satisfying would it be to see someone knock David Duke on his racist ass? Let me know!

4 thoughts on “Very Fine People On Only One Side – BlacKkKlansman”