Yorgos Lanthimos has three English-language films to his credit after his breakout in Greece. His first, The Lobster, is one of the best farces I’ve ever seen and was my favorite film of 2016. Last year he gave us the disturbing horror film, The Killing of a Sacred Deer, which polarized audiences nationwide and developed a cult following. Now we have The Favourite, a sensationalized account of some of the more scandalous rumors surrounding England’s Queen Anne and two of her servants. Thanks to one of the best screenplays to date and electrifying performances from its three leads, this film can make a strong case as one of the best of the year.

This film will definitely be making an Awards Season push, and deservedly so. Among the accolades its already received are the Grand Jury Prize and the Volpi Cup for Best Actress at the Venice Film Festival, a handful of British Independent Film Awards (in advance of the main ceremony this Sunday), and a special Ensemble prize from the Gotham Awards. It’s also up for a Spirit for Best International Film, which makes the third such nominee I’ve reviewed in as many days (the other two will be available on Netflix very soon). As such, it’s time for another categorical breakdown.

Best Actress: I’ve been a fan of Olivia Colman since Hot Fuzz, where she had a small role as the flirty Doris, lone woman of the police force. She can balance comedy and drama with exceptional skill. On the lighter side, she featured prominently on the British sketch show, That Mitchell and Webb Look (check out the “Numberwang” sketches on YouTube for reference), and in more serious terms, she was absolutely brilliant in Broadchurch, my favorite British show in years (not counting Doctor Who, of course). She’s an utterly fantastic actress, so her getting the chance to shine here was worth the price of admission alone.

As Queen Anne, she embodies all of the worst assumptions about the monarch, particularly violent mood swings that can take her from regal class to a whining toddler in a matter of seconds. She’s overly emotional, despondent, and hilarious. In a particularly inspired moment, she’s told by her confidant Sarah (Rachel Weisz) that her makeup job makes her look like a badger. She storms off, stopping to insult a teenage footman at the hall entrance. “Did you look at me? DID YOU LOOK AT ME?” She screams. “LOOK AT ME!” The boy turns his head slightly in her direction. “HOW DARE YOU LOOK AT ME!” before leaving. The timing is absolutely perfect.

But amidst all that bombast, there is vulnerability, and a strong sense of melancholy. She has 17 pet rabbits, one for each of her pregnancies, none of whom survived to adulthood. She has myriad health problems, chiefly gout, and is equally embarrassed and empowered to be chauffeured around in a wheelchair. She requires constant companionship and validation, and as her mind and body slowly decays, she’s even more adamant about asserting her authority. While her underlings fight for her ear, she consolidates, but only for the sake of letting everyone know who’s really in charge. Colman’s performance is one of the best of the year and of her entire career, and I’d love to see her recognized for it.

Best Supporting Actress: It’s been a good year for Rachel Weisz as a lesbian (this and Disobedience). Playing the Duchess of Marlborough, she and Anne have been friends since childhood, and she’s the only one willing to be honest – even brutally so – with the Queen at all times. But she has her agenda as well, which is to continue the war with France (as part of the War for Spanish Succession) so that her husband, the Duke of Marlborough (Mark Gatiss) can win more victories, elevating the family status at court, and allowing her to essentially rule Great Britain as Anne’s proxy.

Over the course of the film, she develops a rivalry with her cousin, Abigail Hill (Emma Stone), whose branch of the family tree has been disgraced. Abigail arrives at Kensington Palace looking for employment, and is given a job as a scullery maid before using her knowledge and opportunistic wiles to land a place as Sarah’s servant, and later Anne’s. She’s conniving and manipulative, and would easily be given the villain’s edit on a modern reality TV show. But she’s also somewhat justified in her Machiavellian machinations, as she lost her status through no fault of her own; she merely suffers from the sins of her father. 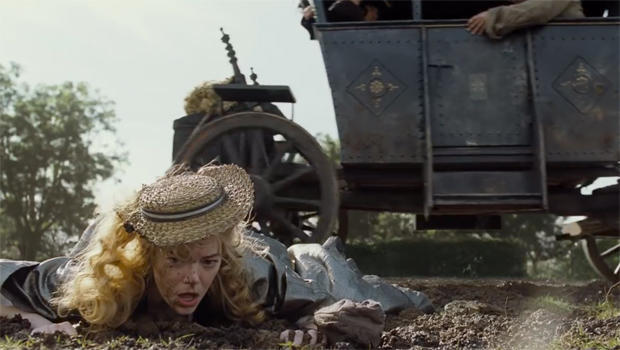 In all situations, she finds a way to gain the upper hand. With Anne, she simply provided herbs that soothed her legs because she saw the need. She unintentionally eavesdrops on Sarah and Anne in bed, so she becomes flirtatious towards Anne, and presumably better in bed. She’s solicited by Robert Harley (Nicholas Hoult), leader of the Tory opposition in Parliament, in order to get inside information on Anne’s (Sarah’s) political intentions, so Abigail works to get her ladyship and noble titles restored in exchange. Colonel Samuel Masham (Joe Alwyn) is infatuated with her, so she plays the sex kitten until she gets what she wants, then barely has the care to service him manually once they’re married. No matter what she does, she always finds the advantage, making friends and enemies at the drop of a hat, and the dynamic she shares with Sarah and Anne is a thing of beauty. And given Emma Stone’s Q-rating these days, it’s even more amazing that she does this all as the third lead. She’s also responsible for one of the few down marks in the film, as her British accent isn’t all that convincing. She’s more convincing than she was as an Asian, but that’s not saying much. Also, if you care, you get to see boob.

Original Screenplay: This script is a masterpiece of rapier wit. It’s biting, sardonic, and note perfect in almost every way. Writers Deborah Davis and Tony McNamara present a deliciously naughty and shocking tale of the excesses of court and of the aristocracy, all while weaving in genuine human intrigue from its leads. Combining events and timelines, the film is largely a revisionist portrait of Anne’s reign, focusing on the sordid affairs of state as well as the sordid affairs of the head of state. Think of it as Inglourious Basterds by way of Jon Lovitz’s “Tales of Ribaldry” sketches on SNL.

The biggest example of this is with Anne, who was rumored to be a lesbian, a rumor Sarah was happy to exploit for personal gain in real history. Here, she’s not only a lesbian, but the titular “favourite” (British spelling) was whoever made her happy in bed the most at a given moment.

There’s also plenty of raunchy dialogue to go around, with several droppings of F- and C-bombs, as well as myriad sexual jokes (including the term, “scabrous whores,” which I want to make into a song). For me, the best moment is between Abigail and Masham. The colonel comes to her bedroom dressed as a full dandy, to which Abigail monotones, “What an outfit!,” which is the title of that particular “chapter” of the film (of which there are eight, I believe, all entitled with a quote from said). She then asks him, “Are you here to seduce me, or rape me?” Shocked, Masham replies, “I am a gentleman!” “So it’s rape, then?” says Abigail dismissively, flopping down on her bed in a prone position, as if daring him to try.

In another glorious artistic decision, some modern elements are added into the proceedings to highlight the absurdity of class and privilege. A cotillion-style party scene involves Sarah and the Prime Minister (James Smith) dancing. At first it looks like all classical dancing, with just hands touching in mid-air while various parties spin in place. But then all of a sudden, they break out into some lifts and twirls straight out of Dirty Dancing before the Prime Minister breakdances. We’re just a note away from Rachel Weisz twerking before Anne calls a halt to the proceedings. In other bouts of sybaritic excess, the gentry shoot live pigeons, race ducks, and literally throw pomegranates at a naked Tory who delights in the wasted fruit.

Moving on from there, the film looks to be a shoe in for a Costume Design nomination, as it’s a period piece (with particular attention being paid to the dresses and the contrasting black and white court wigs of the Whig and Tory parties in Parliament), and it could garner Makeup & Hairstyling as well (Sarah commenting to Harley that his mascara’s running is a delightful jab). There’s an outside chance for Cinematography, as Lanthimos prefers a wide angle “fish eye” lens and a spinning camera to volley back and forth between dialogue and action shots. He definitely likes to give off a “fly on the wall” effect. And of course, given all the potential categories it could go for, don’t be surprised if it’s up for Best Picture, which wouldn’t offend me in the slightest.

I know this might come off as a little tone deaf if it gets a lot of attention, and I’m sure there will be some #OscarsSoWhite response, but anyone who goes there almost certainly won’t have seen this movie, as the extreme whiteness of it all is part of the joke. It’s a reflection of modern-day privilege and catty soap opera drama through the farcical lens of the early 18th century. In doing so, Lanthimos has created another weirdly raucous romp, but it may be his most accessible film yet for mass audiences. Either way, it’s a giddy delight.

Join the conversation in the comments below! What film should I review next? Are you a fan of period pieces? Just how scabrous are we talking with these whores, asking for a friend? Let me know!

4 thoughts on “Forsooth! Yon Bitches Doth Be Cray! – The Favourite”