Viewers of Denmark’s Foreign Language entry, The Guilty, may find unexpected similarities to an American film from a few years ago, The Call, starring Halle Berry. In that 2013 film, Berry plays a 9-1-1 operator who works to save a kidnapping victim played by Abigail Breslin, which expanded from Berry’s grounded performance to a slew of action thriller moments as Breslin and her kidnapper are pursued.

The Guilty, on the other hand, seems to take the most base element of that story and distills it even further, and in doing so creates a more intimate character study that contains some well-crafted story beats because it leaves a lot to the viewer’s imagination.

In what is essentially a one-man show, Jakob Cedergren plays Asger Holm, a Copenhagen police officer who has been relegated to an Emergency Services call center (the Danish equivalent of 9-1-1, which is 1-1-2) for some misdeed that is not initially revealed. The film opens with him getting a call from someone who has had a bad drug reaction, and rather than helping him through the crises, simply chides him before hanging up and calling an ambulance to his location. This is immediately followed by a cell phone call from a journalist looking for a public comment ahead of a court appearance scheduled for the next day. Asger gets chastised by a supervisor for taking a “personal call.”

In those two minutes, we already know all we need to about Asger’s character. He’s hard-nosed and not very empathetic. He has little to no patience for people who get into trouble via their own stupidity or criminal activity. Most importantly, he clearly resents not being able to do “real” police work while confined to a desk. All he can do is call regional dispatch centers which send out officers to the crises he deems worth the time.

This all changes when he receives a call from a woman named Iben (Jessica Dinnage), who pretends to be talking to her young daughter to disguise the fact she’s called the police. Sensing a kidnapping in progress, Asger kicks into high gear, using his friends in dispatch and his former partner to investigate this abduction and take matters into his own hands. He attempts to comfort Iben’s daughter, tries to keep Iben safe, and in an ill-advised bought of machismo, threatens Iben’s ex-husband Michael (Johan Olsen), driving the vehicle. Through it all, he still has to deal with idiotic callers, police bureaucracy, and his guilt about his own issues, all of which stem from him being too assertive.

The film really works because it’s just Asger in the call center throughout the film. About halfway through the film he migrates from an open room to a closed office where he can shutter blinds as he delves deeper into his own personal darkness, but either way, the beauty is in the isolated environment. Even though there are a few officers around him at the call center, they are almost entirely faded into the background, so that Asger is the only piece of emotional and dramatic reaction. Everything else is left to our imagination, hearing the voices over the phone and picturing in our own minds how everyone perceives and processes their own emergencies. It’s a brilliant psychological trick on the audience, which makes the twists and turns of the reactionary plot all the more intriguing. In essence, we get to participate in this film, and that allows for a deeper connection that helps escalate the suspense. Domestically, this was done on an even larger scale via social media in Searching, and it worked to great effect. So too does it work here, because all we have to work with are Asger’s face and the voices through the phone. 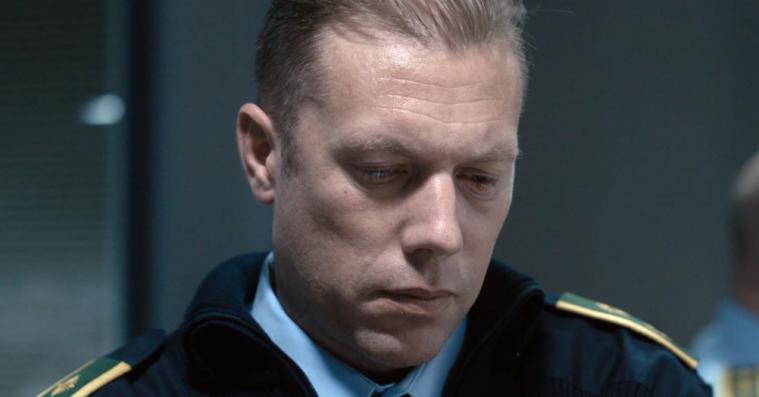 By its very nature, this leaves almost all of the heavy lifting to Asger and Cedergren’s performance. He’s very clean-cut and matter-of-fact in his performance early on, but you can see the pressure building on him throughout, the veins throbbing in his forehead. He conveys annoyance and rage with ease. He can channel Dirty Harry when he’s trying to intimidate someone over the phone. He can even display some exasperated tenderness when dealing with Iben’s daughter.

The best bit of his performance, naturally, is his struggle to remain calm, composed, and clear-headed as he juggles his phone between the obviously distraught people involved in this abduction and the other law enforcement individuals. He has to speak clearly, diffuse tense situations, and inspire compliance in others who either can’t or won’t help him. He also has his own agenda in making sure this incident comes to a positive conclusion, because saving a life right before he’s supposed to go to court and answer charges about his previous conduct can only help his case. There’s this very delicate balance Cedergren has to maintain throughout the film – with the camera right in his face the whole time, mind you – where he has to maintain the coolest of heads in a situation that becomes increasingly fucked up as the story moves along, and again, we see none of it other than his face.

Normally I’m an advocate for a “show me, don’t tell me” approach when it comes to film and storytelling. From my very first screenwriting class I was cautioned about making a dialogue-driven script rather than an action or character-driven one. But here, by necessity the dialogue drives the action, and because of the central conceit of the single actor in a single location, where all he can do is hypothesize and react to the information he’s given, it not only works, it’s the most appropriate way to tell this story. Where The Call failed was in making it more of an action thriller instead of an intimate story anchored by such a strong actress as Halle Berry. Every time we left the call center, the film suffered. No such worry here, though that may change when the film is remade in the US with Jake Gyllenhaal either later this year or early next year.

With this film in the books, that will conclude coverage of the Foreign Language shortlist for the time being. I’ve now seen seven of the nine shortlisted films, and that’s as far as I can go for now. As for the other two films, Birds of Passage won’t be released domestically until February 13, which is after the nominations come out. If it gets a spot, I’ll certainly see it. If not, I’ll still try, but it will be low priority compared to everything else in the annual Oscar blitz. The final film, Kazahkstan’s Ayka has no US distribution company at the moment, and therefore is unavailable. I’ve seen a couple of dubious listings for international DVD sales, but even if they’re legit, I do not have a regionless DVD player, so I wouldn’t be able to see it anyway. Foreign Language submissions never have to be screened in America, so I’m assuming this one is a lost cause. If that situation changes, I’ll pursue it further. But honestly, given the Golden Globe and Independent Spirit nominees, I think I’m pretty well covered at this point. When we get the BAFTA nominees later this week, I’ll get a final piece of preview info. But I’m guessing I’ve seen the five nominees for the Oscar already by this point, and I’m confident when the nominations come out, I’ll be able to declare this category finished.

Join the conversation in the comments below! What film should I review next? Do you know any 9-1-1 operators? Have you ever ridden a bike drunk? Let me know!