This is a review I’ve put off for a while for one reason or another. I had a bit of a backlog with articles and new features I wanted to debut when I saw this just over a week ago. Then I thought it’d make for a good Easter review, as this film does go heavy into the whole, “You need some CHURCH in your life to save you!” attitude, but I felt Amazing Grace would be better for the holiday, as it’s much more uplifting. Finally, after watching Game of Thrones last night (I’ll say nothing more than to confirm once and for all that Arya is my queen!), I figured this was as good a time as any, having watched a TV show where people battle the dead. Given the plot of this movie, it seemed only appropriate.

Loosely based on Mexican folklore, The Curse of La Llorona (pronounced “Your-OWN-uh; it took me weeks to get it right) is a fairly standard-issue (read: bad) modern horror film that pits something supernatural and sinister against unsuspecting people, leading to death and terror (for the characters; the audience feels none of this). There is a tangential link to the Conjuring franchise in the presence of Tony Amendola as Father Perez (there’s also a brief side flash clip of Annabelle), but for the most part this is a stand-alone film that hopes the relative goodwill of the series’ fan base will draw them in. Because this really is just a nothing movie.

The film begins in 1673 as an origin for the character (Marisol Ramirez). Handed down for over 200 years, La Llorona – The Weeping Woman – is a bogeyman tale told to children about a beautiful woman who drowned her children in a fit of despair before taking her own life. Her spirit now wanders, looking to take back the children she lost. Her story is told as a cautionary tale to Mexican children as a means to get them to behave, because La Llorona only comes for the bad children, sort of a Latin American Krampus. My Mexican girlfriend wanted to see this movie because she herself was scared of La Llorona as a kid, and wanted to see if the movie version would be just as terrifying. Spoiler alert: she’s not.

The film then flashes forward to 1973, for reasons I can only think are to just have a nice, round 300-year jump, and moves to Los Angeles, where we meet Anna Tate-Garcia (Linda Cardellini), a widowed single mother (her late husband a policeman killed in the line of duty) and social worker who checks in on other single moms in the area for both the LAPD and Child Protective Services when kids are reported for truancy. Splitting time between her children and work, Anna gets grief from all sides as she does her best to keep up.

Right off the bat, this is a miscast. I love Linda Cardellini, and have since Freaks and Geeks, but if you’re going to lean into the Mexican folklore of this story, wouldn’t it make sense to have a Latina actress? What, was Michelle Rodriguez too busy? I’m not usually one to harp on representative casting or a lack thereof, but Cardellini is just too, well, white for the part. I’m just saying, if you’re going to have a Mexican family, don’t cast a woman who lists Italian, German, Scottish, and Irish as her genetic source material. She’s one of my favorite actresses, but when I think “La Llorona,” I definitely do not then think, “Oh yeah, grab the hottest version of Velma Dinkley for this.” 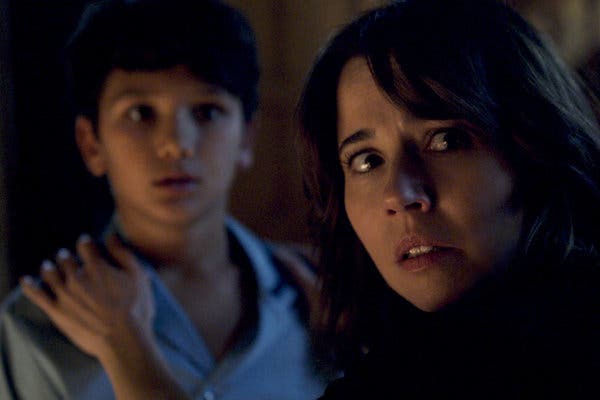 Anyway, Anna is sent out to her friend Patricia’s house (Patricia Velásquez), and finds her two young sons locked in a closet. Patricia pleads that she’s trying to protect the boys, but Anna has them taken away to a group home while the case is processed. The next night, the boys are stalked and captured by La Llorona, and are later found drowned in the Los Angeles River (which is pretty hard to do, what with it only being a shallow creek most of the time).

After the deaths of Patricia’s sons, she blames Anna, and prays for La Llorona to take Anna’s children instead, hoping that she’ll bring her boys back, which is of course nonsense, but who am I to argue with a mother’s grief? For whatever reason, this causes La Llorona to target Anna’s son and daughter (Roman Christou and Jaynee-Lynne Kinchen, respectively), stalking and swooping in from all directions. Occasionally she touches the kids (and Anna), leaving burn marks on their wrists. This leads Anna to seek Father Perez’s help, who in turn directs her to a man named Rafael Olvera (Raymond Cruz), a former priest who now blends Catholicism with spiritual mysticism as a means to exorcise evil phantoms and such.

A lot of the film makes absolutely no sense, even if you buy into the mythology that inspired it. In the stories of La Llorona – both in the film and outside of it – she is noted to only come after naughty children. It’s a scare tactic to keep kids in line. So why does she then target the Garcia children, who have literally done nothing wrong? The simple answer is, the writers didn’t care, so they just made up a reason (Patricia’s grief-stricken vengeance prayers) to set the plot in motion. Similarly, when La Llorona targets Patricia’s sons, the deed is done in fairly short order. She hypnotizes one, who lures out the other. They walk down the halls of the group home they’re staying at, then she simply pops out and they’re done. With Anna’s kids? It’s all about playing with your food, as she has the kids dead to rights a number of times and simply decides to either sneak up for no reason, or go somewhere else whenever another person enters the fray. Seeing as how the movie never shows us how, exactly, she “takes” the children away the first time, the movie decides to have it both ways and make sure La Llorona cannot physically take Anna’s kids away for more than an hour of movie time.

And of course, we have the calling card of the lazy modern horror movie, in its over-reliance on jump scares. For a while I was actually thinking about complimenting the movie for its restraint, as we went a solid 20 minutes before the first one. However, after that point, we got tossed around for a whopping 23 jump scares by my count. You know you’ve got a subpar product when your sole source of “scares” is a quick pan or jump cut, followed by a scream and a string quartet music sting, specifically designed to make you momentarily startled so that you involuntarily flinch. Studio brass like to think that counts as scaring the audience, and let me tell you, it does not.

And it’s not even like they’re fun to point out. It’s literally a case of wherever the camera is pointing (or the focal point character is looking), simply divert your attention to the exact opposite area of the screen, and five seconds later, BAM there she is! The problem is further compounded by the fact that La Llorona’s banshee-like scream is the same hollow, rattled, diaphragm scream that every supernatural female antagonist has had in horror films lately. If you’ve seen The Nun, The Woman in Black, or any number of other bad movies in the last 10 years, you’ve heard this stock screaming sound effect. It’s almost as annoying as the Wilhelm Scream.

All that said, there are a couple of bright points that save this movie from being a total failure. The first is Raymond Cruz as Rafael. He has this sort of cool, aloof, Mexican Mark Ruffalo thing going, and that projected confidence allows him to deliver the few bits of comic relief this movie has. He leans into the absurdity of his role, committing to the bit where others would just start giggling, so his presence in the third act is a welcome change of pace. Also, while La Llorona herself isn’t at all scary, the filmmakers do come up with a couple of interesting ways to tease her presence. For example, Anna’s daughter Samantha carries an umbrella around – you know, for all those times it doesn’t rain in L.A. In one scene, Samantha is in the back yard and drops it. She picks it up and opens it to shake off the detritus from the ground, and through the clear plastic of the unfurled umbrella we see a flash of La Llorona. It’s a small touch, but a good one. If only the rest of the jump scares weren’t so trite and inducing of eye rolls…

If you’re a huge fan of the Conjuring series, then you’ve probably already seen this. Otherwise, there’s really no reason to waste your time or your money. There are a couple of things that make it worth a go if you’re bored on a Saturday night and want to watch HBO in a few months’ time, but apart from that, don’t bother. Because really, in honor of my girlfriend’s heritage, there’s only one word to describe The Curse of La Llorona:

Join the conversation in the comments below! What film should I review next? Do you believe in ghosts and spirits? Seriously, how dumb are jump scares? Let me know!