This is a review I’ve been waiting to write for a long time. In a weird way it makes a sort of logical sense. Tolkien, the Fox Searchlight biopic about the author of “The Hobbit” and “The Lord of the Rings” among others (and incidentally the first Searchlight release since the Disney acquisition), is not just a life story about J.R.R. Tolkien, but about the relationships he built along the way, giving him the inspiration to create the world of Middle-Earth. While particular attention is paid to his imagination and his love of language, the film chooses to focus mainly on his journey from childhood through World War I, his own epic quest to survive and reunite with the companions he’s gained in life.

It is only appropriate then that I’ve had to wait an age to deliver this review. You see, I saw this film almost a year ago. I was able to attend an advance screening while the film was still in post-production. As such, many of the visual effects were not yet complete. Some of the CGI was very angular, rudimentary, and unrendered. We were even alerted before viewing that we’d even see cranes and other set construction equipment in the background of some shots; they hadn’t been digitally removed yet.

The audience was asked for immediate reactions so the producers could adjust the film accordingly ahead of release. And as you’d expect, we were all sworn to secrecy, signing Non-Disclosure Agreements to state that we wouldn’t reveal the details of the film until after it came out. It’s a shame, too, because I really enjoyed the movie, and have been wanting to share it with you all. The film has been getting some mixed reviews, mostly because it plays like the travel and character scenes in the film adaptations of his work, rather than the bombastic set pieces, but honestly I prefer it this way, because again, Tolkien’s work was much more about the world and the characters. And in this way, the film does succeed.

At a young age, John Ronald Reuel Tolkien – chiefly called Ronald (played by Nicholas Hoult in adult form) – and his brother and mother are relocated to Birmingham by their priest and family friend, Father Francis Morgan (Colm Meaney – I’m literally watching him on Star Trek: The Next Generation as I type this), who is appointed as guardian to the boys when Mrs. Tolkien (Laura Donnelly) dies. Through the patronage of the wealthy Mrs. Faulkner (Pam Ferris), Tolkien is given a home to live in and is enrolled in a prestigious private school, where he immediately excels in the Classics thanks to his love of linguistics.

While at school, Ronald befriends three other young boys: Geoffrey Bache Smith (Anthony Boyle), an aspiring poet, Christopher Wiseman (Tom Glynn-Carney), a class clown and composer, and Robert Gilson (Patrick Gibson), the son of the headmaster (Owen Teale, Alliser Thorne on Game of Thrones). Their friendship evolves from their love of the arts, and their commitment to one another. 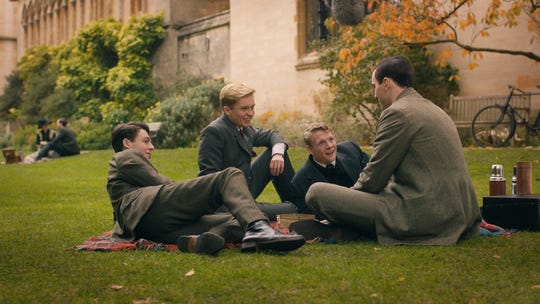 Throughout this phase of Tolkien’s life, presented in flashback while he’s fighting in WWI, as well as those “present-day” scenes of him in the trenches, have both subtle and blatant references to his later characters. He sketches images that later become the likes of Sauron and others, but he also sees them on the battlefield. Wisps of cloud and shadow form into smokey forms who kill just as many soldiers as German guns and mustard gas. His school friends exhibit character traits of the LOTR Hobbits, and even his battlefield attaché is named Sam (Craig Roberts).

In addition to the value of friendship, Tolkien’s work went to great lengths to show the value of love and the power of strong women. In this film, this takes the form of his eventual wife Edith Bratt (Lily Collins, daughter of Phil), who was the literal inspiration for Arwen and other characters. Edith grew up in the same boarding house as Ronald, playing piano for Mrs. Faulkner, and they fell in love because of their independence and their desire to break free from traditional roles. It’s a wonderful courtship, believable because of the strength of Collins and Hoult’s performances.

The film is far from perfect. It’s overly mawkish at times, and while the dialogue is exceedingly clever (how could it not be, given the subject?), you could almost certainly call, “Hashtag White People” over the whole thing. Even Tolkien’s most vulnerable human moment consists of him getting drunk and gallivanting on the Oxford lawns yelling in early Elvish. You can easily argue that the film is counterproductive to recent efforts to encourage more diverse representation in the film industry. Also, in a mild semi-spoiler from the first version I saw, I think two of Colm Meaney’s scenes got ultimately cut, and nobody puts Chief O’Brien in a corner!

But again, most of the criticisms I’ve seen of this movie miss the point entirely. It does have some odd pacing, but it’s supposed to be a “slog,” because it is in the journey that we learn the most about ourselves, and it is in the journey that we test the bonds we have built with our comrades. Sometimes there are happy endings, and sometimes the darkness prevails, but no matter the outcome, it’s the getting there (and back again; sorry, couldn’t resist) that holds the real story. And thanks to some pretty decent acting and a very compelling tale, this is a perfectly fine film worth seeing at any time.

Join the conversation in the comments below! What film should I review next? Have you ever seen a work-in-progress screening? If young Tolkien is Frodo and adult Tolkien Aragorn, does that make Colm Meaney Gandalf? Please say yes! Let me know!