Ten points if you get the reference in the headline (the points mean nothing).

Anyway, Octavia Spencer is one of the best character actresses out there, and it’s a shame that she’s almost always shunted to the side into a supporting role, usually that of “sassy black friend.” She’s earned an Oscar for her efforts, but I’ve always wanted to see her carry the leading responsibilities, because I know sure as I’m sitting here that she has the chops to pull it off.

In the new horror film, Ma, which I saw weeks ago at an advance screening but couldn’t discuss until now (stupid NDAs), my prayers were answered, because Spencer takes the reigns in a truly messed up story and plays it all to the absolute hilt. She is a supremely delicious horror villain, both a sympathetic character and a wonderful bit of devious, her motivations – fucked up though they may be – completely understandable, even if we don’t agree with her actions.

In small town Ohio, Sue Ann (Spencer) is a lonely veterinary assistant who loves animals but hates her job, as well as her nagging boss, Dr. Brown (Allison Janney). Meanwhile, former resident Erica Thompson (Juliette Lewis) moves back to town with her teenage daughter Maggie (relative newcomer Diana Silvers, who played a cheerleader in Glass earlier this year and has a supporting role in Booksmart, review coming soon) after failing to make it as an actress in California. Maggie quickly gains friends at her new high school, which separates her from the somewhat overprotective Erica.

The two leading ladies meet by chance, as Maggie’s new friends have her ask adults to buy them beer outside a gas station. The veterinary clinic where Sue Ann works is directly across the street, and as she walks one of her clients, Maggie pulls her aside and eventually talks her into being their mule. Sue Ann makes them promise that they won’t drive drunk, but does eventually chalk the whole thing up to kids being kids, something she remembers well enough from her own high school days.

When they ask her to help a second time, she invites them to her house, where she has a furnished basement. Again, the logical, realistic justification is that if they’re going to drink underage – as teenagers do, especially in boring small town Ohio – they might as well do it safely. Her only rule is that they stay in the basement and never go upstairs to the main house. One of the clique dubs her, “Ma,” and mildly sexually harasses her, to which Sue Ann responds by pulling a gun. Everyone’s sufficiently freaked out, but she just laughs at her prank, showing the lad that the gun doesn’t work. The ice-breaking gamble works, with the leader of the group, Haley (McKaley Miller from Hart of Dixie) loving Ma’s attitude and sheer brass balls. Ma’s basement eventually becomes the de facto party hub for the entire school, with Sue Ann serving as house mom, bartender, and under-the-table drinker.

The gun stunt does raise a red flag with Maggie, but she can’t really put a finger on it. She also can’t really discuss things with Erica because a) it’d be admitting to some massive rule and law-breaking on her part, and b) Erica has her own problems, as she’s forced to take a job as a cocktail waitress at the local casino, where she runs into old classmates like Ben Hawkins (Luke Evans) and his girlfriend Mercedes (Missi Pyle), who doesn’t miss the opportunity to pull a Mean Girls on Erica.

Sue Ann is able to observe all of these proceedings, because in a small town, everybody knows everybody, and as it turns out, Ben, Mercedes, Erica, and Sue Ann were all classmates, and in the case of Erica and Ben, their children are dating each other. Through a series of flashbacks, we see how Sue Ann was bullied and manipulated by the other popular kids, especially Ben. 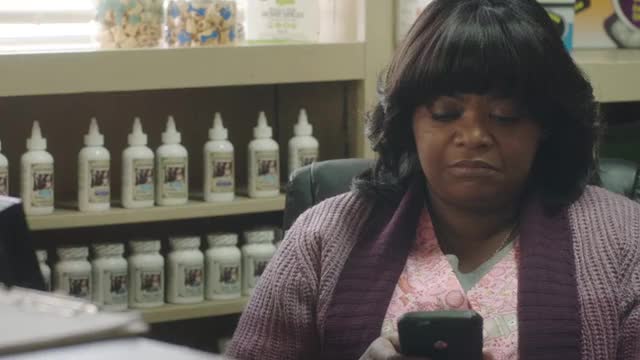 Those hurt feelings from old sins create parallels between Sue Ann’s actions in the past and present. She was needlessly abused as a teenager, and now she’s being used by popular kids as an adult. She enjoys the companionship, but the moment she becomes too clingy (sending WAY too many texts and videos to their phones despite them not giving her their numbers, along with a lot of social media stalking), Haley tells everyone to cut Ma off, engendering more resentment. Maggie also gets really scared once she sees what Sue Ann is keeping in her house. Past and present eventually converge into a grizzly, yet wholly satisfying bit of revenge play that puts everyone in danger.

Octavia Spencer plays this role about as perfectly as you can. In the original version of the script, Sue Ann was supposed to not have a backstory, but director Tate Taylor (who directed Spencer to her Oscar in The Help) made sure to not only give her a believable one as the film developed, but one that allowed Sue Ann to be both psychotic and sympathetic. And thankfully, Spencer is well up to the task. Depending on the scene she can either be the most emotionally manipulative member of the cast, daring the audience to feel sorry for her, and in others she’s about as dastardly as Hannibal Lecter. The rest of the film doesn’t rise to Silence of the Lambs levels of suspense and plotting, but Spencer certainly owns every single moment, because Sue Ann as a character was hurt and traumatized, but also doesn’t know how to properly socialize as an adult, which creates a perpetual loop of abuse and emotional torment, either internally or projected onto others.

The rest of the cast is functional, but apart from a few moments with Maggie and Haley, they never quite approach Spencer’s level. Luke Evans makes Ben into a nice secondary antagonist, allowing the flashbacks to inform his worst tendencies. Juliette Lewis does well with her limited reactionary role as well.

The film is at its best, though, when it just allows Ma to be Ma, no matter what incarnation that takes in a given moment. Octavia Spencer drives much of the humor (save the “virginal” girl who pretends to be asleep half the time) and suspense, while the rather bleak setting of a sleepy small town gives the whole affair a very lived-in feeling, and that’s before we get to the rustic quaintness of Ma’s basement.

Of course the film has problems, like why any teenagers would willingly go to a stranger’s basement to drink (or why they’d go back once Ma starts acting crazy and her secrets get revealed), but I think the film handles them well. In this example, there’s something to be said to just chalking it up to teenagers being drunk, horny, and stupid. Don’t pretend the kids you see in this movie aren’t the same kids you encounter every day (or that you weren’t one of them when you were that age). Teenagers want to drink and screw, it’s called hormones. So while it doesn’t make sense as an adult, I totally believe that teens who want beer will override any misgivings and head straight to the basement in the house in the woods. I 100% believe that.

Honestly, the biggest flaw is that the film feels a bit rushed at points. I know the town is small, but I was sincerely hoping there’d be more adversaries for Sue Ann’s revenge once the time came. I also wish the rampage had come earlier, because aside from one particular moment midway through, all the carnage is reserved for the third act climax. I personally would have liked a more spread out menace, but that’s just me.

In many ways this is a throwback to the teen exploitation horror movies of the 70s and 80s, which works well because a good deal of Sue Ann’s resentment comes from exploitative behavior from that era. It’s a twisted take on nostalgia that I think works to good effect, especially in this modern age where movies try to reference anything and everything from better bygone times. If you’re going to go back to old wells, this is the way to do it, with an unconventional lead who basks in every moment she gets (and who incidentally makes sure that the black character isn’t the first to die in a horror film). I wish the film was paced differently and that the supporting performances were a bit more up to the high bar set by Octavia Spencer, but this is one hell of a fun time of a movie, and in a sea of terrible horror movies – past and future – it’s good to know there’s still quality to be had.

Join the conversation in the comments below! What film should I review next? Which character actors would you like to see take center stage? Whose mouth would you sew shut if you got the chance? Let me know (hope it’s not me)!

One thought on “Better Not Bring Yo Kids! – Ma”