When I was a junior in high school, I took AP English Literature. It was a fun class because given the small size (only nine students), we could delve deeper into literary works and concepts than the more full classes. This also meant we could explore different ways to study, including artistic films. It was in that vein that we were shown Jim Jarmusch’s 1995 film Dead Man, where Johnny Depp plays a fugitive accountant caught up in a deadly love triangle in the old west, and befriends an Indian who mistakes him for the poet William Blake, as they share a name (though Depp’s character goes by Bill and the poet had been dead for several years in the film’s timeline).

It was weird. It was spacey. It was one of the most unique subversions of genre I’d seen before or since. The film had such a profound effect on me that at the end of the school year (which literally might be exactly 20 years ago today), my teacher gave me two books of Blake’s poetry, which I still have to this day. It also kindled a love for Jarmusch’s cinematic eye and sardonic wit, and I’ve been a fan of his films ever since (Stranger Than Paradise, Down By Law, and Coffee and Cigarettes are also favorites). He’s one of three filmmakers that I would figuratively give my left nut to work for – the others being Kevin Smith and Quentin Tarantino.

So when I heard that Jarmusch had made a zombie movie that was debuting at the Cannes Film Festival, you’d best believe my squee meter got dialed up to the max. And in the end, The Dead Don’t Die did not disappoint (although my girlfriend thought it was kind of stupid, and so did a decent number of critics). The film is disjointed at points, certainly, and it won’t go down as one of his greatest works, but there’s a lot to love and laugh at in this film, and that more than makes up for any shortcomings.

Boasting an all-star ensemble cast, The Dead Don’t Die succeeds most when it lets the satire bite just as much as the ravenous zombies that provide the film’s central danger. A lot of the jokes are very in-your-face, which can sometimes be off-putting in lesser hands, but Jarmusch sees the line and straddles it well for the most part. There’s also a ton of meta humor to be had, as a lot of the characters – major and minor alike – seem to know they’re in a movie, and the humor derived from that works to great effect.

Taking place in Centerville, Pennsylvania, a town of about 700 (I’m guessing the production averaged the populations of the TWO Centervilles in PA), the main story is led by the three-person police force – Chief Cliff Robertson (Bill Murray), and officers Ronnie Peterson (Adam Driver) and Mindy Morrison (Chloë Sevigny). Before anything really gets started you get your first bit of bear-poking, with Jarmusch making sure that each member of the department has a last name ending in “-son,” to gently mock the “folksy” small-town nomenclature of a place where “everybody knows everybody.”

After initially responding to a call to check on “Hermit Bob” (Tom Waits), accused of stealing a chicken from Farmer Frank Miller (Steve Buscemi, sporting a bright red “Keep America White Again” hat; I’m sure the character name is also a reference), they notice that some odd things are happening, including loss of cellular service, watches stopping, animals fleeing homes, and the fact that it’s midday bright outside after 8pm. Scanning their radio, they can only hear ominous news stories about “polar fracking,” which seems to have reset the Earth’s rotational axis (the comical denials from “pro-job creation” politicians is one of the least subtle touches of the film, but still funny) or a drawling country song called “The Dead Don’t Die” by Sturgill Simpson. In one of the film’s great moments of self-awareness, Murray asks why the song sounds so familiar, to which Driver replies, “It’s the theme song,” playing for the second time in the film’s opening five minutes (including credits). Seriously, I nearly did a spit-take in the theatre.

When night finally does set in, the full moon takes on an eerie glow, and the dead start rising from their graves, beginning with two (Sara Driver and Iggy Pop) who attack the local diner, killing those inside and obsessively taking all the coffee. It is later observed and theorized that the undead gravitate towards what they were most obsessed with in life, as teenagers stare at non-functioning smart phones, athletes resume training, and the town drunk, Mallory O’Brien (Carol Kane), who lay dead inside the police station’s drunk tank, revives and yearns for chardonnay. 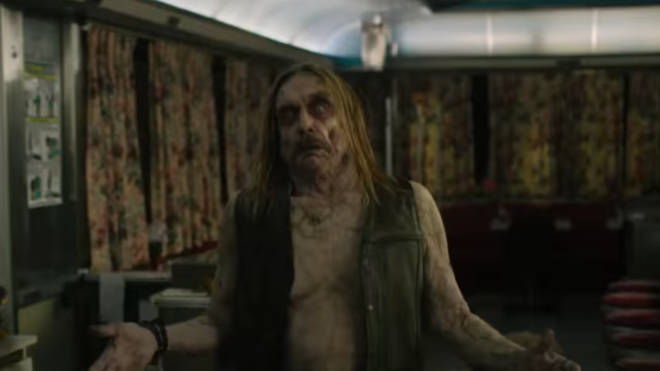 A lot of the fun of the film is in these small roles, where long-celebrated actors and celebrities get to have a little winking fun. After writing the theme song, Sturgill Simpson cameos as a zombie dragging a guitar behind him. Early in the film, RZA plays a delivery man for “WU-PS,” complete with brown truck and uniform with the Wu-Tang Clan logo adorning. Tilda Swinton plays a significant supporting role as a coroner who looks like Beatrix Kiddo mixed with Galadriel, with accompanying combat skills and a very strong Scottish accent. She’s basically there to weird everyone out and play up the years-long running gag that she, Tilda Swinton, is actually an alien. The payoff for this is spectacular.

There are other great winks and nods to the genre that Jarmusch has lots of fun with. A local shop clerk named Bobby (Caleb Landry Jones) delivers zombie-killing advice straight out of George Romero’s established classics, and just happens to get trapped in a hardware store where the owner, Danny Glover, has plenty of tools to accomplish the goal. Rosie Perez plays a “speak with your white voice” version of herself as a news anchor named Posie Juarez, working for a TV network way too big for a town so small, but representing the stereotypical “sanitized” minorities that heartland white people are comfortable with. Selena Gomez, Austin Butler, and Luka Sabbat show up as out-of-towners on a road trip just so they can be fodder even when they pretty much do what you’re supposed to do (Adam Driver also gets to live out my ultimate fantasy when it comes to Selena Gomez, so that’s a bit of satisfaction just for me), highlighting the pointlessness of survival horror. All the while, Ronnie is there to be a constant Debra Downtrodden, noting several times that, “This is gonna end badly.” Why he says that is one of the most exquisite reveals of the entire movie.

As I said though, this movie is not perfect. There are some disjointed moments as well as some jokes that are visually nice, but just don’t land. For example, while it’s cool to see a zombie at a tennis court swinging a racquet at nothing, who the hell gets buried in a tennis skirt to make that visual gag work? There’s a subplot involving three adolescents (Maya Delmont, Taliyah Whitaker, and Jahi Winston, whose character is named “Geronimo,” a literal reminder to just go for it, consequences be damned) who are imprisoned in a juvenile detention facility – a school – who make a daring escape from their initial captivity, but otherwise their story line is never resolved.

With so much stuff going on and so many stories to intertwine, things can get jumbled, and there are moments when it becomes clear that Jarmusch has backed himself as much into a corner as any one of the zombies’ victims. As such, it’s almost impossible for the movie to not end badly, regardless of Ronnie’s warnings. The sad part is that plot aside, the way the film itself wraps up is something of a misfire. The story ends just about as you’d expect, but what ruins it is a misplaced monologue about materialism which just doesn’t land. The social commentary of the film in general works because it’s on the nose satire (again, three kids are “imprisoned” in school). It’s a slap you in the face joke. But when it’s all said and done, the final bullet point isn’t a joke, but an indictment which shifts the tone for no good reason right at the end. There are ways that it could have worked, but in the final product, it just didn’t.

But even so, this is the type of movie that reminds me why I would love to work for Jim Jarmusch at some point. He is a master at subverting expectations and showing the darker side of Americana, and this movie is a perfect example, even if it didn’t quite stick the landing. The entire cast, regardless of the size of their roles, is game for all the shenanigans, and the jokes are first rate. And even though it’s mostly played for gags, the theme song is actually pretty awesome. I’m not a fan of the zombie genre in general, mostly because there’s really no new ground to cover (or rise from, as it were). Jim Jarmusch and his cast get about as close as you can get, though.

Join the conversation in the comments below! What film should I review next? What genres would you like to see lampooned? How did the Cranberries song not make it onto the soundtrack? Let me know!