My most profuse apologies for the lateness of this post. I saw Quentin Tarantino’s latest opus, Once Upon a Time in Hollywood nearly two weeks ago, but haven’t been able to have the quality computer time necessary to write a review until just now. I’ve started a new job working overnights for a certain online superstore named after a major South American river, and my body is still adjusting to the time shift and muscle strain.

It’s a shame, too, because I absolutely loved this film. I will concede that I’m biased in this film’s favor in two major regards. First and foremost, Tarantino can basically do no wrong in my eyes. Not every film is an instant classic (Death Proof and Jackie Brown are the closest to “meh” in my eyes, and even they’re a B- at worst), but there’s something to love about every single one of them. Second, given his penchant for accuracy in setting, many areas of Los Angeles were retrofitted to 1969 facades and marquees for the filming, so it was incredible to drive through the city over the last year as the movie was being shot, just to see the transformation.

In many ways Once Upon a Time in Hollywood is a collection of Tarantino’s greatest hits. Many of the best elements of his films are on display here, from the film history references, to the catalog soundtrack that often acts as its own character, to the out-of-sequence narrative, to his penchant for feet, revisionist history, and a bit of the old ultraviolence. And yet the film is more than the sum of its parts, because there’s a sense of longing, an almost mawkish hope, that pervades the entire film, whereas the bulk of Tarantino’s work can be easily interpreted as cynical, if not outright nihilist.

That yearning is made manifest in the form of the film’s leads, Rick Dalton (Leonardo DiCaprio) and his stunt double, Cliff Booth (Brad Pitt). Based on the relationship between Burt Reynolds and Hal Needham, Dalton is a former TV cowboy (the fictional Bounty Law, based on Wanted Dead or Alive) who tried to make the transition to film, but was too late for the era of the classic Hollywood leading man, and now that he’s on the north side of 40, he can no longer even get TV work except as a one-off villain, the obstacle to be defeated by newer, younger heroes, as described by his agent Marvin Schwarz (Al Pacino, hamming it up with aplomb). Booth, on the other hand, essentially serves as Dalton’s chauffeur because he can no longer get stunt work, thanks to rumors that he killed his first wife, and an on-set fight with Bruce Lee (Mike Moh).

Both men know they still have a lot more to contribute to the entertainment industry, but circumstances both beyond their control and of their own making prevent them from realizing their full potential. Meanwhile, they have the constant reminder of what could be in the form of Roman Polanski (Rafal Zawierucha) and Sharon Tate (Margot Robbie), who have recently moved in to the gated property next door to Dalton. Tate, along with ex-boyfriend Jay Sebring (Emile Hirsch), lives the perfectly privileged Tinseltown lifestyle, an up-and-coming ingenue landing supporting roles in movies (in a very charming sequence, she watches herself in The Wrecking Crew at the Bruin Theatre in Westwood, currently only showing this film – again, the repurposing of L.A. landmarks is such a fun, almost interactive touch to those of us living here) and having every need attended to. Dalton believes he could revive his career if he were to get in good with his neighbors. 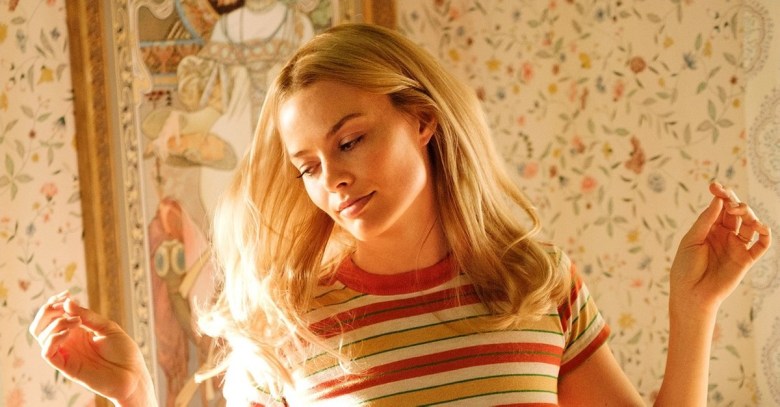 Now of course, with Sharon Tate being a key player in this movie, the lingering dread is the Manson Family, who infamously murdered Tate, Sebring, and three others in the summer of 1969, while Tate was two weeks from giving birth. The first teases of the cult are shots of a group of girls walking down the streets, hitchhiking and dumpster diving, which Dalton dismisses as just a bunch of hippies. One of them, however, dubbed “Pussycat” (Margaret Qualley of The Nice Guys), catches Booth’s eye, and eventually hitches with him to the group’s compound at Spahn Ranch in Chatsworth (mere blocks from where I’m working right now), and where Booth and Dalton once shot Bounty Law. Booth encounters many members of the “family,” including Tex Watson (Austin Butler), Gypsy Share (Lena Dunham), Clem Grogan (James Landry Hébert) and Squeaky Fromme (Dakota Fanning), among the many taking advantage of the ranch’s owner, George Spahn (Bruce Dern) to use his land. Manson himself (Damon Herriman, who also plays Manson on Mindhunter) only shows up briefly, staking out the Tate house early on. In an odd way, despite this very brief appearance, he’s essentially Tarantino’s avatar in the film, as Manson used his charisma to control everything from behind the scenes. In movie parlance, Charlie’s lone appearance shows him acting as something akin to a location scout.

The beauty of Tarantino’s body of work is that even when you think you know what’s about to happen, you can never be entirely sure. Case in point, the complete alternate reality fantasy of the ending to Inglourious Basterds, where Hitler is killed in a movie theatre well before the war ends. That famous moment is itself mirrored in this film, with Dalton starring in a World War II movie where he kills Nazis with a flamethrower. Given this possibility, the film lends itself a decent degree of suspense because you just don’t know how Tarantino’s going to handle the Tate murders, or if he’s going to at all. The only thing I was certain of in the lead-up to the climax was that given Dalton and Booth’s characterizations to that point, I could tell that Tarantino was seemingly trying to set us up for a “happy” ending. The question was how far he’d have to go to make it happen.

But no matter how the film resolved itself, the journey was well worth it. The performances, particularly from DiCaprio, Pitt, and Robbie are all excellent in their own way. The script is top notch, with that biting wit and humor that’s been a hallmark of Tarantino’s work for nearly 30 years now. The camera work (from three-time Oscar winner Robert Richardson) is superb. If there’s a flaw to be had, it’s that this is very much a Tarantino film for his fans. If you’ve never seen any of his work, you’ll have no earthly idea what’s going on. But honestly, if you’re a fan of cinema in any form, you should have seen at least something of his by now. This film is a love letter to the city that made him, both in the form of the industry that’s nurtured his art, as well as the people who inhabit it, and in that vein, the love is very much requited on my part.

Join the conversation in the comments below! What film should I review next? What’s your favorite Tarantino film? What do you think Red Apple cigarettes taste like? Let me know!