It was inevitable. It’s September, we’re officially into awards season, and that means we get the prestige films that studios think will attract critics and voters for the highest prizes. Most of these films range from middling to great, with even the mediocre ones showcasing a single amazing acting performance, or some inspired camera work, or perhaps a witty script or great costume design. But every year, there seems to be at least one entry that’s just a complete dud.

This year, that dubious honor belongs to The Goldfinch, directed by John Crowley (Brooklyn) and adapted from Donna Tartt’s Pulitzer-winning novel. From beginning to end, this faux-Dickensian slog through the First World Problems of the 1% is drab, confusing, poorly acted, and so white-bred that it makes my pasty ass look like Dave Chappelle by comparison. The fact that it’s also brazen, naked Oscar bait only exacerbates the failure.

Told through a confusing and poorly-edited series of flashbacks and time jumps, the movie stars Ansel Elgort (Baby Driver) as Theo Decker, who as a child (Oakes Fegley of the 2016 Pete’s Dragon remake) survived an explosion at the Metropolitan Museum of Art, which killed his mother. In the aftermath of the bombing, and with no apparent motivation (there are some hints later, but nothing concrete), he stole a rare painting of a bird by a late Dutch master, the titular Goldfinch by Carel Fabritius. He is taken in by the wealthy family of his school friend, where he is treated mostly with disdain by the posh set, apart from his friend and the family matriarch (Nicole Kidman, cashing a check and almost never blinking or changing her facial expression).

Theo also strikes up a friendship with a local antiques restorer called Hobie (Westworld‘s Jeffrey Wright) and his temporary ward, Pippa (Ashleigh Cummings), the niece of Hobie’s late partner, who also died in the blast. Theo was literally standing next to them during the explosion. Little is known about Theo’s family life, other than that he officially retains no memory of the explosion (i.e. lying to investigators to hide the fact that he took the painting), though he blames himself for his mother’s death, and his father is a deadbeat alcoholic who “used to be an actor” and skipped town six months prior. When the father shows up to claim his son, and you see it’s Luke Wilson, one almost has to wonder if it’s some sort of meta joke, especially since he arrives with his cocktail waitress girlfriend, Xandra (Sarah Paulson) and whisks him off to Las Vegas.

In the desolation of the Nevada desert, Theo meets a Ukranian immigrant named Boris (Finn Wolfhard doing the most cringeworthy Eastern European accent imaginable), who becomes the Artful Dodger to his Oliver Twist. Boris is emo, cynical, and of course, physically abused. Also, his mother is dead, just like Theo’s. In fact, so is Pippa’s. There are so many dead mothers in this film, I’m surprised Warner Bros. put it out instead of Disney.

Oddly enough, the friendship between young Theo and Boris is the only enjoyable part of the film. There’s humor, nuance, and it’s also the only time in the movie where we’re not constantly dealing with the tedium of the idle rich. Instead, Boris and “Potter,” as he calls him (young Theo really is made up to look like an American Harry Potter) get into trouble, take some drugs, but also explore what it truly means to be alive. For a while I was almost hoping for a queer love story to develop, a sort of alternate universe to Logan Lerman and Ezra Miller in The Perks of Being a Wallflower. But alas, like many plot threads, it’s abandoned almost as soon as it begins, and when we inexplicably see Boris again as an adult (Aneurin Barnard of Dunkirk), he’s somehow a rich gangster, and he looks like Robin Lord Taylor’s version of The Penguin from Gotham, only without the limp. 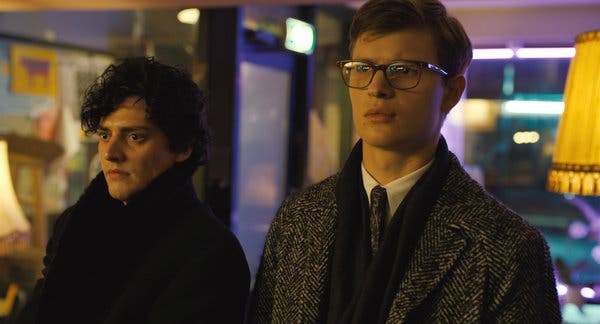 The book from which the film was adapted is a polarizing one, with some critics absolutely loving it, while others found it trite and clichéd. I’ve not read it, but based on what I saw here, I can see where there might have been intrigue. Unfortunately, regardless of the quality of the novel, I feel there was something very serious lost in the translation from page to screen.

For example, as a child, Theo learns about antique restoration from Hobie. It’s meant as a bonding scene, as Hobie shows Theo the subtle differences between a genuine antique and one that’s been reproduced using machinery rather than hand tools. He has Theo glide his hands along wooden surfaces so he can tell them apart. Now, on the printed page, this type of scene can be filled with subtext, and the reader can certainly imagine what I assume is a very detailed description of the process, so that even if they can’t physically feel it themselves, they can develop a strong mental image. On the screen however, it’s just a guy stroking some wood, which I’m sure is a popular category on Pornhub, but does nothing for the audience in a purely visual medium.

Structurally, the film is all over the place. Apart from the constant back-and-forth time jumps (which in the present day makes further time skips that constantly confuse the viewer), it opens with Theo narrating a letter he’s writing to Pippa and Hobie, a confession of sorts for his wrongdoings in stealing – and eventually losing – the painting. That opening narration would barely qualify as stream of consciousness, offers basically no information, and honestly is long forgotten by the time the film’s final scenes circle back to that moment. Roger Deakins, who finally won a long-overdue cinematography Oscar for Blade Runner 2049 almost makes a case to return his award, as early scenes with Theo intentionally keep everyone he talks to out of focus, washed-out colors substitute for character development, and dust particles under a beam of light are presented as some sort of epiphany for Theo, but it’s utterly meaningless. The editing also leaves a LOT to be desired, as ambient dialogue is used as a scene transition far too many times, and leaves us further confounded, because we don’t know if it’s actually an internal monologue until the shot changes and we see Elgort or someone else talking for real.

It’s all so cheesy and fake artistic. The painting is meant to serve as a MacGuffin on par with the briefcase in Pulp Fiction, but it’s got all the subtlety of Gwyneth Paltrow’s head in the box in Se7en. We’re meant to feel something for Theo’s crush on Pippa, but it’s never really developed in any significant way. He sees her in the museum and is drawn to her (cute redhead, who wouldn’t be?), he befriends her as she recovers, but then she moves away, and apart from more narration while writing a letter, we don’t see her again until she’s a somewhat well-adjusted adult with a boyfriend and living in London. The few glimpses we do get into her life offer the chance at something profound in how people deal with trauma, but again, she’s never around long enough to be more than a passing fancy for this young man of great expectations. Instead we focus on Theo snorting vicodin and we’re supposed to feel sorry for his numerous tragedies.

And then on top of everything else, the film wants to have this grand theme of the threads of fate, as everyone involved in Theo’s childhood rematerializes in one form or another when he’s an adult. They present it as destiny, I just call it bullshit convenient contrivance. There’s a scene where Xandra sunbathes on the patio and the song, “Jai Ho” plays in the background. That Oscar-winning song is from Slumdog Millionaire, another prestige film that overachieved thanks to studio campaigning and audiences susceptible to the concept of fate. The difference with Slumdog is that the conceit is placed front and center from the very first scene, and the social constructs of modern India are juxtaposed with Jamal’s sense of faith to create a somewhat believable narrative around destiny. Here, Theo befriends Boris, then goes back to New York, and years later he just happens to go to a bar asking for a drug hookup and Boris just happens to be there, and thus the third act can be set in motion. Again, if I want to be fed bullshit, I’ll stick a spoon directly up a cow’s ass, thank you very much.

There are a few moments of levity, certainly, and Jeffrey Wright alone elevates the proceedings by his mere presence. This certainly isn’t the worst film I’ve seen this year, but it’s pretty damn bad, and the fact that Warner Bros. and Amazon thought they could sneak this past us as a genuine Oscar contender is brazen at best and insulting to our intelligence at worst. If nothing else, before you decide whether or not to see it, pay close attention to the TV trailers for this movie. In the shameless attempt to sell this as prestige, the commercials throw several laudatory pull quotes at the screen. If you look closely, you’ll notice all of them are from a single review by Pete Hammond of Deadline. The film currently holds a 26% rating on Rotten Tomatoes, and really, it should only hold a 1%, because the 99% sure as hell won’t be entertained.

Join the conversation in the comments below! What film should I review next? What’s worse, cynical Hollywood cash grabs or Oscar bait? Would this movie have been better if Nicolas Cage stole the painting? Let me know!