It’s an extremely hard task to create an Oscar-worthy film out of disparate elements from other movies, particularly when the previous materials have gone down as all-time classics. Thankfully, Writer/Director James Gray (whose last film – the transcendent Lost City of Z – was ignored during awards season) and leading man Brad Pitt are a pair ably up to the task with Ad Astra (Latin for “to the stars”), a thoughtful, deliberative one-man epic that’s a feast for the eyes as well as a worthy tribute to its forebears.

Taking the core story beats from Heart of Darkness/Apocalypse Now and using many of the filmmaking techniques from 2001: A Space Odyssey, Gray crafts a narrative that may be more akin to Homer’s Odyssey than the Stanley Kubrick/Arthur C. Clarke sci-fi masterpiece. Whereas 2001 was very much a journey into the unknown, Ad Astra hews closer to the Greek epic poem, in that the voyage of Roy McBride (Pitt) is one of family reunion and atonement for his own sins and the sins of his father, Clifford (Tommy Lee Jones).

Set in the “near future,” NASA has evolved into Space Command, a paramilitary operation that provides commercial travel, scientific research, and interplanetary defense. It’s what I’m guessing Donald Trump imagines whenever he brings up his farcical “Space Force.” On a towering antenna that reaches into the lower atmosphere, Major McBride has a brush with death after a power surge from space creates a catastrophic electromagnetic pulse all over the Earth, severely damaging the antenna. He learns that the Lima Project, headed by his presumed long lost father, might still be intact orbiting Neptune. The project, which was created to search for intelligent life somewhere out in space (*sings in Eric Idle voice* ‘Cause there’s bugger-all down here on Earth!), is emitting antimatter blasts which create the surges, and threaten all life back home. Given his family connection, Roy is sent to Mars in hopes that he can send a message to his father and put a stop to the danger, under the supervision of his father’s former colleague, Colonel Pruitt (Donald Sutherland).

As Roy McBride, Pitt puts on a master class in subdued character acting. Almost like an avatar of the stoic 1960s astronaut, McBride is noteworthy for never letting his emotions control him or buckling under pressure. It is mentioned that even when he spacewalks or nearly plummets to his death, his heart rate never exceeds 80 beats per minute. He is the epitome of grace under fire.

And yet, his character remains eminently compelling because of how straight Pitt plays him. Never mind that the man could speak volumes just through his eyes, the way Pitt slowly gives way to his baser emotions is powerfully sympathetic, but also quite relatable. Everyone has their issues, but for him, there is no veneer of calm obfuscating internal rage for Roy McBride. He’s trained himself more than any other person to be completely pragmatic and detached, to the point that he can seal a suit puncture in an instant, casually dispose of an ally’s corpse, or give a matter-of-fact review of tragedy to a computer when he takes his daily psychiatric evaluations. Pitt’s performance includes several monologues and narrations, all filled with purple prose and introspection. The reflexive nature of these moments often goes from figurative to literal, as Gray and Oscar-nominated Cinematographer Hoyte van Hoytema make great use of sunlight and glass to flood the viewer’s senses, to say nothing of the color palette. 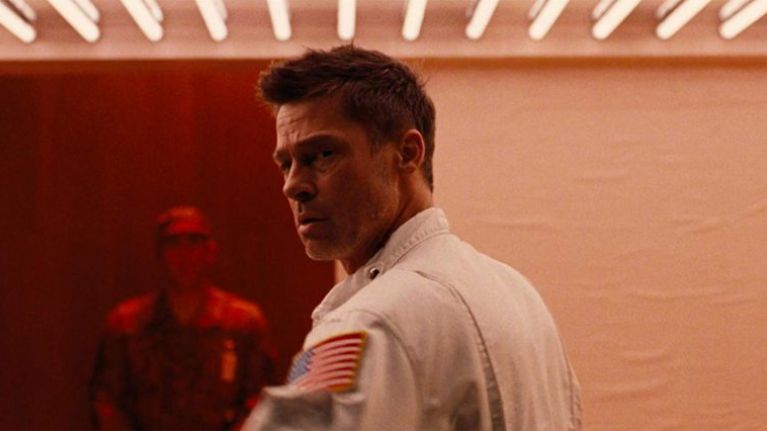 It is only when McBride allows himself a degree of humanity that it all comes crashing down. Going off script in a sound booth, he makes a personal – though still quite unemotional, despite one tear trickling down his cheek – plea to his father. That infinitesimal moment of vulnerability does elicit a response, but it also gets Roy kicked off the project. Only then does he allow himself to feel anything, raging and pounding the walls of a “calm room” where flowers are projected on wall screens, and questioning everything he knew about his life, his family, and his estrangement from his wife (Liv Tyler). When he learns the truth about his father from a bureaucrat on Mars (Ruth Negga), his sense of duty grows beyond that of his simple military structure and discipline, leading him to commandeer a vessel bound for Neptune, so that he may confront his father once and for all.

As I said, there are a lot of elements of Apocalypse Now in the story (revered leader possibly gone crazy in a remote location, special assignments to neutralize his threat, internal monologues, etc.) as well as the ancient Greek Odyssey (family drama, long voyage fraught with dangers set from the “ocean god,” the casual death of just about everyone other than the hero). But there are some spectacular visual elements as well. Like 2001, there’s a commitment to making the space experience as real as possible, whether we’re talking about the designs of the ships, the physics involved in space travel, or the sound design, which leaves a lot of shots hanging in the silence of the void, save for Pitt’s near-constant poetic narrations. I saw the film both in normal screen format and IMAX, and while you won’t lose any impact on the smaller screen, this is only the second film this year (the other being the Apollo 11 documentary) that might be worth shelling out the extra cash. Some of the images are just that much more astounding in a larger format, particularly an early shot of Pitt looking down on the Earth from the top of the space antenna (which would cause vertigo in lesser hands) or an almost magical descent through the lunar and ice debris that forms Neptune’s rings. Combined with Max Richter’s note-perfect orchestral score, everything on the screen grabs your attention, even in the more mundane moments of the film. I think Kubrick would have approved.

Now, to be fair, the film does feel overly long at points. There are times when this is as much a literal odyssey as it is a figurative one. A good chunk of the film is spent on the physical journey, with smaller moments spiking your senses just long enough to keep you engaged, be it some not-so-subtle satire about commercial space flight leading to a Yoshinoya on the Moon or Virgin Airlines charging $125 for a blanket, or some downright creepy exploration of a disabled ship floating in space. Some may find these extended travel scenes boring, and I totally understand that. Just like with Pitt’s narration, it’s a matter of taste and of how much you’re hooked into the film itself. For me, this wasn’t an issue, but I recognize that it can be.

More importantly, viewers should be fully aware that this is decidedly Brad Pitt’s movie. The rest of the cast is ancillary at best. The man has an Oscar as a producer on 12 Years a Slave, and this may be the role that puts him over the top for an acting one, but like several films before it (The Wife, Still Alice, and Darkest Hour just to name a few recent examples), this movie exists to showcase Pitt and only Pitt. I loved his performance. Your mileage may vary. But definitely don’t expect an ensemble cast feeding off each other for myriad great performances.

On a similar note, there were two very minor things about the film that I just couldn’t buy, no matter how hard I tried. The first was the unexpected religious nature of the film. Given that this is about astronauts searching for alien life, there’s an almost unsettling amount of those same scientists and astronauts proclaiming that they’re doing God’s work and marveling at His creation, which oddly enough leads to a mostly secular humanist resolution. None of that really tracks. It feels like it should have worked in reverse. Secondly, the film is set in the “near future,” but I call bull. This film is amazing, but we’ve established a society here where there are borderless territory disputes on the Moon, US military installations on the Moon and Mars, a giant space antenna that extends into the atmosphere, space pirates, Norwegian science vessels, and deep space missions that can reach Neptune from Mars in less than 80 days. That’s not the “near” future. I’d argue we’re centuries away from that point given current progress, where basic science is denied, and the heads of our government envision a space program that’s little more than shouting, “Pew! Pew! Pew!” and pretending their fingers are lasers.

Still, all that said, I was blown away. Brad Pitt gives one of the finest performances of his career, worthy of nomination. The story is in the tradition of all-time great heroes’ journeys, and is executed at the highest level, thanks to James Gray’s skill as a writer and director. The score is phenomenal, and the visual and sound effects are some of the best you’ll see all year. There may be some shortcomings when it comes to suspending disbelief, and as previously stated, don’t expect the supporting cast to really do anything except be there for their necessary scenes to move the plot forward. But all in all, the highs far outweigh the lows, giving audiences the first true contender for the coming awards blitz.

Join the conversation in the comments below! What film should I review next? Do you enjoy space operas? What other movies could improved by the sudden appearance of killer monkeys? Let me know!