Korean filmmaker Bong Joon-ho has, in his relatively short career, established an international reputation as a man who can bend genre to his whim. His highly successful output thus far has blended sci-fi, fantasy, horror, and suspense – oftentimes within the same piece of work – but he always grounds his films in the reality of the human condition, finding those brilliant bits of nuance that can make just about any story feel like a page out of any normal person’s existence. Whether it’s the heart-stopping Snowpiercer or the sneakily heartwarming Okja, the man has developed into a true artist over the last two decades.

His high profile is certain to go even higher with his latest effort, Parasite, the unanimous winner of the Palme d’Or at this year’s Cannes Film Festival, the first Korean film to earn the honor. Once again Bong melds multiple genre beats, from satire to farce to dark comedy to outright suspense to create one of the most fully-realized stories you’re likely to see this year. And just as before, the whole affair is completely accessible to the average viewer, rendering all the absurdity entirely relatable.

The story revolves around the creative and ingenious work ethic of the Kim family. Beginning the film completely unemployed and living in a half-basement apartment (where open windows invite pesticide smoke and drunkard piss from the street level), the family of four scrapes by doing odd and degrading jobs like folding boxes for a local pizza shop. The social structure of South Korea is already on full display simply by this meager setting, as the town where the Kims live is terraced, so that the upper class neighborhoods are separated from them by steep hills and hundreds of stairs. To figuratively climb out of poverty, one must also do it literally. The stacks of pizza boxes littering their apartment serve as a visual metaphor for just how badly the odds are stacked against them, as the only way to meet their quota is to cut corners and watch YouTube videos about folding speed, only to fold them incorrectly and still get docked pay.

Suffice to say, the family needs a break. They are smart and resourceful, and are clearly willing to bend the rules for the sake of getting just a little bit ahead. Their commitment to each other is also apparent from the very first moments, to the point where I was initially thinking that this would be another feel-good look at the bottom rung of society like last year’s Japanese film, Shoplifters, which I absolutely loved. But Bong is not about to rest on his laurels, merely content to show us how the other half lives. This story is about how the other half thrives.

The chance the Kims need comes in the form of son Ki-woo (Choi Woo-shik) and his friend Min-hyuk (Park Seo-joon). Min-hyuk tutors a wealthy high school girl in English, but must leave the job because he’s about to study abroad in America. He asks Ki-woo to take over for him, rather than leave the task to his classmates, as Min-hyuk has a crush on the young girl Da-hye (Jung Ji-so) and wants to date her when he returns, but he doesn’t trust his horny frat brothers in the interim. He then gives the Kims a going away present, a “luck rock,” meant to bring fortune to those who possess it. 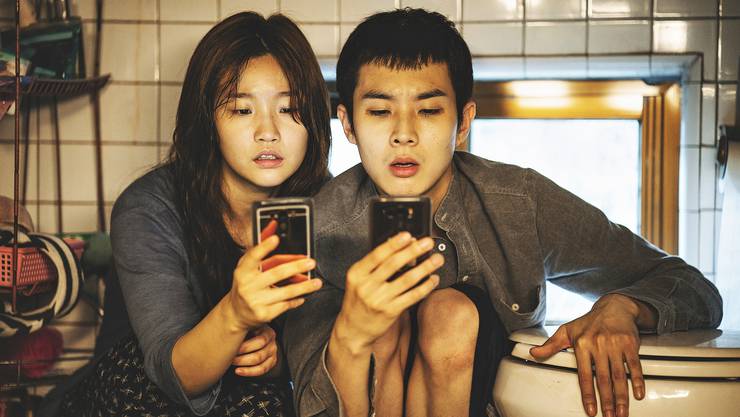 After sister Ki-jeong (Park So-dam) forges documents to make it appear that he’s in college, Ki-woo is able to secure the tutor position by playing to the vanities and insecurities of Mrs. Park (Cho Yeo-jeong), Da-hye’s mother. Seeing that Mrs. Park’s young son (Jung Hyun-joon) is rambunctious and likes to draw, and also seeing that Mrs. Park herself is easily manipulated, he recommends an art tutor for the boy named “Jessica,” who is in fact just Ki-jeong. Within days, through some well executed con artistry, “Jessica” gets Mr. Park (Lee Sun-kyun) to fire his chauffeur and hire her father Ki-taek (Song Kang-ho giving a masterfully animated performance), who in turn gets the family maid (Lee Jung-eun) dismissed and replaced by his wife Chung-sook (Jang Hye-jin), all under assumed names. In true “eat the rich” fashion, this crafty foursome has completely insinuated itself into high-paying jobs without their clients being any the wiser about their true identities or life stations.

Of course, we all know what happens to the best laid plans. Fortune tends to favor the bold, and that certainly is the case for the Kims, but as they get more confident in their positions, they also get more sloppy. Ki-woo decides to start dating Da-hye himself, which would invite a world of problems if she ever wanted to meet his parents. Ki-taek gets a bit too familiar with Mr. Park, coming dangerously close to crossing a line of appropriateness when discussing the Parks’ marriage. And most damning of all, no matter what bath soaps, laundry detergents, or shampoos they use, the Kims can’t escape the fact that they “smell” poor. When the Parks go on a camping trip, the Kims decide to live high on the hog in the Parks’ house for a night, eating their food and getting super drunk. It is at this point that everything starts to go awry, with the film taking a dark, almost sinister turn (the clues peppered throughout the movie leading to this reveal are gems), and the Kims get an all-too-real reminder of just how fleeting their success is.

Bong orchestrates the tonal shifts with a wonderfully deft touch. Depending on the moment, the film is equal parts funny, heartwarming, and downright shocking, but not once does it feel like we’re in a different story. Every scene flows into the next perfectly.

It also doesn’t hurt that the entire cast is on point. Each character is believable and acts completely naturally within the established parameters, and the performances (particularly Song Kang-ho and Park So-dam) are so well done that you feel a rapport with the Kims no matter where you stand on the socio-economic ladder. More importantly, Bong makes sure that no one is a cliché. While the story is chiefly about a working class family getting one over on the wealthy, Bong takes pains to show that the Parks aren’t just the stereotypical “idle rich.” Mrs. Park, despite her naïveté, is a deeply caring mother and highly organized when it comes to planning a birthday party for her son. Mr. Park, an elitist businessman, is nonetheless fully committed to being a “playful” dad to his kids and a faithful lover to his wife. They aren’t the type of slothful rich we have here in America that a family like the Kims could take advantage of indefinitely. Even when they’re successful, the Kims do learn the hard lesson that it’s not going to be easy making a living off of these people.

Bong Joon-ho has created a modern classic in terms of storytelling and genre-weaving. It goes without saying that this is South Korea’s submission to the Academy Awards, where I have to imagine it will finally break through and get the country a long-overdue nomination (how last year’s Burning didn’t get a nod is beyond me). What I’m saying though, is that a nomination may not be enough. I’ve now seen two of the 93 submitted films (obviously I won’t see them all), and both are likely to get a nod, but honestly, any movie should be considered hard pressed to prevent Parasite from winning International Feature Film. I’ll go even further, and genuinely advocate for it to get serious consideration as Best Picture.

Join the conversation in the comments below! What film should I review next? Do you think a foreign film could win it all? Have you ever trashed a house you were sitting? Let me know!

11 thoughts on “The Sweet Smell of Excess – Parasite”