After the release of American History X, Edward Norton read Jonathan Lethem’s novel, “Motherless Brooklyn,” and immediately secured the movie rights. It took over 20 years, but the passion project has finally come to fruition. Starring, writing, and directing the film, Norton wears many hats (including a MacGuffin one) in this throwback to the classic film noir format, and for the most part succeeds. There are a couple of troubling elements, but all in all, this is a great bit of prestige bait.

Norton leads the proceedings as Lionel Essrog, a private detective in 1950s New York who has a photographic memory, but also suffers from Tourette Syndrome and Obsessive-Compulsive Disorder (never explicitly stated, but it’s fairly obvious to observe and Norton has confirmed in interviews), making him highly useful to his office, but also highly awkward in public. After the murder of his boss and mentor (Bruce Willis), Lionel takes it upon himself to figure out what case he was tracking down and solve the killing in the process.

With the help of his fellow detectives (Bobby Cannavale, Ethan Suplee, and Dallas Roberts), as well as some incredible good luck and a well-placed matchbook, Lionel is able to find a woman named Laura Rose (Gugu Mbatha-Raw), a community activist working to prevent the gentrification of Harlem and other poor and minority neighborhoods. Their nemesis is a city planner and real estate developer named Moses Randolph (Alec Baldwin), who has essentially rigged the city council to do his bidding. Lionel works with Laura, her father (Robert Wisdom), her associate (Cherry Jones), and Moses’ destitute engineer brother Paul (Willem Dafoe) to uncover a web of deception and corruption and save Laura’s life.

Overall, Norton has created a genuinely entertaining and clever film noir, something we rarely see these days. While the solution is somewhat predictable if you know how to look for early clues, the story is very well-crafted, with enough twists and red herrings to keep you guessing even when you’re sure you know what happens. Also to Norton’s credit is the character development, which in classic noir is rare outside of the lead detective, but here extends to make almost all the main characters multi-dimensional. It also really helps that the man knows how to direct actors, with the nearly all-star cast giving pretty spectacular performances.

As for the adaptation itself, the choice to set the film in the 1950s is the correct one, I think. Norton has stated that the original novel is set in the 1990s, but still uses a lot of 50s dialogue and plot devices, so it made more sense to set the film in its natural timeline (and in case the sets and costumes didn’t convince you, you can tell it’s the 50s because people use the word “colored” to describe minorities, and you can drive from Brooklyn to Harlem in less than a day and a half). Normally I’d advocate for an adaptation to be as true to page as possible, but the idea of someone dishing out noir lingo while looking like Pauly Shore seems incredibly silly to me, and would only make the film seem like a parody, rather than the sincere mystery and character study it ends up becoming.

However, there were two glaring issues for me. The first is the villain, Moses Randolph. Norton created the character out of the clear blue, based in part on controversial New York city planner Robert Moses, whom Norton himself describes as an evil genius. The problem is that no matter what his real-life basis was, he’s basically just Donald Trump. He’s rich, racist, cares nothing for the poor or minorities, is obsessed with “winning,” demands loyalty from everyone around him to hatch his schemes, wishes to rebuild New York in his graven image, is endlessly corrupt, petty, spiteful, and mafia-like, and of course, he’s played by Alec Baldwin. Moses is more of an impersonation of Trump than the actual impersonation Alec Baldwin does on Saturday Night Live. 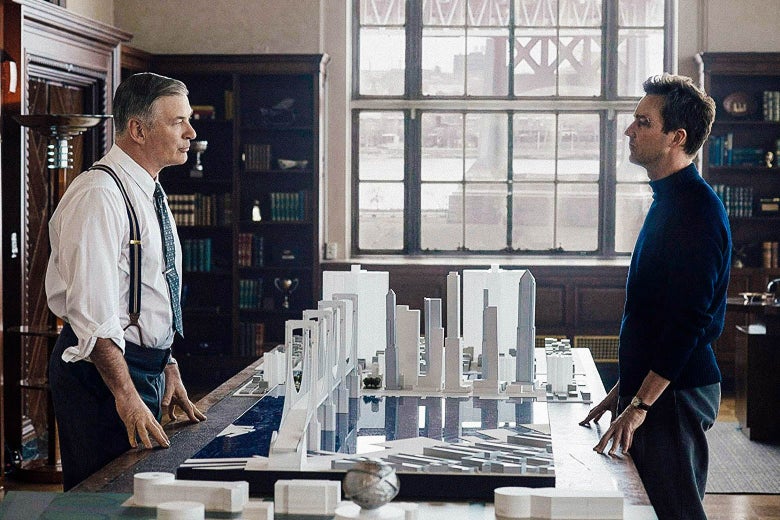 Now, I don’t have a problem with a Trump avatar being the villain. Objectively, Donald Trump is one through and through. My issue is creating a Trump villain who didn’t originally exist in the book, making him the main baddie, and then brushing it off as actually being based on Robert Moses. It seems more like a convenient excuse to avoid liability if Norton gets sued (even though parody is considered fair use and completely protected by the First Amendment), and comes off just a tad disingenuous. Baldwin plays the role well, and his buttoned-up menace serves as a good foil for the socially-inept Lionel. I just wish the messaging was a bit more transparent rather than just winking at the obvious comparisons the character invites.

Second, I raised this issue a couple of months ago when I reviewed The Peanut Butter Falcon. Young Zack Gottsagen gave a nomination-worthy performance as the title wrestling fan, but it brought up a potentially problematic dilemma. We’re firmly into awards season, and everyone’s putting their best foot forward in hopes of Oscar Gold. One of the oft-criticized tropes of the circuit is the fact that “affliction” leads to an almost automatic acting nomination. Whether it’s a physical or mental handicap, if an actor plays a character that is in some way disabled, it’s almost a rubber stamp.

That’s where we have our issue. I pondered back then what might happen if the Academy voters had to choose between someone playing someone with a mental handicap versus Gottsagen, who actually has a mental handicap – Down Syndrome. In our current “cancel culture,” would it be problematic to nominate someone who pretended over someone who genuinely has something holding them back? We’re already at the point where people protest when straight actors play gay characters, or when Emma Stone or Charlize Theron play Asian characters. To nominate Ed Norton for Best Actor and not Zack Gottsagen would be to seriously court controversy.

Because while it’s an interesting element to Lionel’s character, the fact that he has Tourette’s and OCD is laid on really thick, and half the time it’s played for laughs. Or at least, I think it is; the guy sitting next to me was guffawing the entire time. I think it’s essential to have this as a part of Lionel, but it should have been used with more discretion. I haven’t read the book, so I don’t know how often it comes up in the source material, but the important thing is that Lionel’s tics are meant to humanize the character and render him as someone to be underestimated before he outsmarts everyone else. However, because he’s the writer, director, and star, the frequency and intensity of Lionel’s episodes are entirely at Norton’s whim. Sometimes it works. Other times it feels like Dug the dog screaming “SQUIRREL!” in Up. While I love my fellow 8/18-er, if he gets an acting nomination with Gottsagen left out, I feel like it’ll be yet another distraction for the Oscars rather than a celebration of great cinema, including this film.

On the whole, these are minor concerns in an otherwise charming and clever noir throwback. It’s a welcome bit of genre and mystery we haven’t seen in a long time, and Norton does an exceptional job in creating his universe, a testament to the two decades he spent getting this project done. It’s a bit odd to have Alec Baldwin play a villain who is essentially Donald Trump. It’s also potentially devastating if Norton gets a Best Actor nomination for playing affliction over Zack Gottsagen who actually has one. Still, that doesn’t detract from the overall quality of the film, which at its core is a good mystery and a well-written, well-acted spectacle.

Join the conversation in the comments below! What film should I review next? What are your favorite mysteries? What other handicaps can we give detectives to make them ironically great at their jobs? Let me know!