In the trailers for Queen & Slim, the feature directorial debut for Melina Matsoukas (known for music videos until now), a character known as Uncle Earl (Bokeem Woodbine) refers to the two title characters as “The Black Bonnie & Clyde,” a reference to the couple being on the run from the law. However, there’s a big difference between these two characters and the lionized criminals of old. As has been depicted in several forms of media, Bonnie & Clyde sort of reveled in their life of crime, with some even suggesting that there was a sexual kink in their spree. The fugitives here, however, find love in each other as they watch their world fall apart around them due to a “crime” that they really didn’t commit and a desperate attempt at survival.

It’s a far cry from the legends of the late Parker and Barrow, and that’s what makes the film enjoyable for most of its runtime. Everything sort of falls apart in the third act, but the ride to get there is still thrilling and emotionally resonant, thanks to the stalwart performances of the two leads.

Never referred to by name until the very end of the film, the titular “Slim” (Daniel Kaluuya) randomly has a dinner date with “Queen” (relative newcomer Jodie Turner-Smith, listed as “introducing” because most of her work to this point has been in TV) weeks after they matched on a dating site (it should be noted their title nicknames are also rarely, if ever, spoken). They have no chemistry, no compatibility, and Queen even notes later that under normal circumstances there wouldn’t be a second date. A busy defense attorney with a chip on her shoulder, she simply has no time for romance, and only asked Slim out because she needed to do something with another person as a means of relieving stress.

What follows is one of the largest cases of Murphy’s Law imaginable, where basically anything that can go wrong does. Slim is pulled over by police, and the situation quickly devolves. The cop (Sturgill Simpson) begins profiling Slim, becoming more aggressive, as if he’s looking for an excuse to arrest him, or worse. It’s later revealed that he has previously gunned down minorities during routine stops. When Queen gets out of the car to record the incident as a means of preserving her date’s rights, she is shot by the cop, leading to a struggle that ends with Slim killing the cop in self-defense. From that point on, they’re on the lam, running into just about every bit of bad luck you can think of, from constantly running out of gas, to accidentally hitchhiking with law enforcement, to getting ratted out from hiding by a white lady calling 9-1-1 simply because she sees black people in public, an absurdity that shouldn’t exist in this country, but is sadly all too common.

The film is at its best when it focuses on the dynamic between its leads. Kaluuya is one of the best actors working today, and Turner-Smith gives a quasi-debut performance worthy of a Supporting Actress nomination, because their relationship comes out of need rather than desire. They are equals in every sense of the word, with incompatible agendas and agency, but both sides are valid nonetheless. Sometimes it manifests itself in the little things, like Slim being religious while Queen is an atheist. Sometimes it’s more serious and heavy material, like Slim wanting to turn themselves in while Queen, having defended the worst of society, believes there is no chance at a fair trial. But as their journey goes on, they come to a mutual understanding, and eventually even attraction bordering on love due to their shared ordeal. They learn to trust and rely on one another, because all around them are examples of those unworthy of such intimacy. 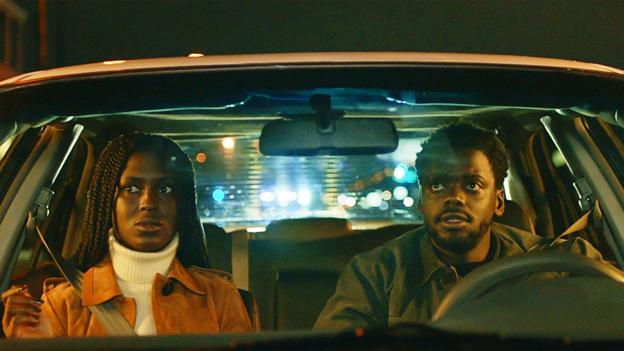 There are also a few interesting statements about race in this country outside of the usual police brutality story beats. As the pair attempt their escape, they’re aided by black people all over the country, even if those people disagree with what they did. It’s more important to help those in need than to pass judgment. No better is this illustrated than in a scene at a dance club where the owner proclaims them to be in a safe place, giving them the briefest of respites and a chance to grow closer as human beings rather than as whatever projections society places upon them.

All that said, the whole thing really does crumble in the third act. While getting car repairs, a mechanic’s teenage son, Junior (Jahi Di’Allo Winston) tells the pair how much he admires them, and how he’s willing to die for their cause. The two truthfully tell him there is no cause. This is just a fucked up series of events. That doesn’t stop Junior, however, and the next day he participates in an anti-police protest that erupts in violence after Junior shoots a black policeman in the face.

Where did he get a gun? Why would he think a peaceful protest could achieve better results if he murdered someone? Why kill a black officer? There’s no commentary on “Uncle Toms” in his personal manifesto! And why would the story feed into the tired stereotype that teenagers want to recreate what they see in media? We have a serious gun problem in this country, as well as a huge problem with race relations vis-a-vis law enforcement, and your emotional turning point is an extreme version of the long-debunked “kids only know violence because of TV and video games” cliché? Really?

Up until that moment, we were having an interesting, nuanced discussion about what justice could really mean in our society, and whether or not a horrible act could at least be qualified and properly contextualized, if not forgiven. We had a thrilling chase with wonderfully-developed characters, exploring what it means to be human in the worst of circumstances. And then the film goes and ruins it all by juxtaposing an earned act of love with a baffling act of violence. Any intelligent debate we might have had to that point gets thrown out the window in favor of gratuitous shock value, and all it does is galvanize the pursuers of our “heroes” and lead to a rushed conclusion that gets robbed of all possible profundity. Then again, the story was partially conceived by James Frey, the liar behind “A Million Little Pieces,” so what should I have really expected?

It’s a shame, too, because until this bit, we had a really solid plot on our hands. If you’re able to get past this really ill-advised diversion, then this film is really enjoyable, thanks to Kaluuya and Turner-Smith’s performances. If you’re like me, that moment pulled you right out of the picture, and you spent the rest of the running time just waiting for it all to be over. In a weird way, it’s almost fitting. Queen & Slim’s story is about everything possible going wrong for them, so it’s only natural for Queen & Slim to fall into the same trap. The only difference is that for “The Black Bonnie & Clyde,” they don’t have the luxury of a rewrites to get them out of the mess they’re in.

Join the conversation in the comments below! What film should I review next? Could you find love in extreme circumstances? What dynamic duo would you want you and your significant partner to be compared to? Let me know!