Tonight we continue with our look at the “Netflix 6,” the six major releases that Netflix has staggered out over the course of the fall, both in theatres and on their streaming service, in an aggressive bid for next year’s Academy Awards. Last year they nearly grabbed the proverbial brass ring with Roma, scoring the most nominations and a handful of wins, but not the top prize of Best Picture. This year they are emboldened, and will likely settle for nothing less than total victory. Don’t believe me? Look at the Golden Globe nominations. Netflix is clearly pulling out all the stops, including what must have been some very upfront marketing with the 98 people who determine those awards. One has to seriously wonder how big the gift bags were for the HFPA members.

On a previous edition of “DownStream,” we looked at three of Netflix’s slate, and tonight, we’ll wrap it up with the other six. I’m only reviewing these in the order I saw them, but as it turns out, the back half is a LOT stronger than the front. With the first three, The Irishman is the clear standout, and is sure to be a major player come Oscar time. With this trio, you can make strong arguments for all of them to pick up some hardware in the major categories, and even make a play for Best Picture. While the Academy can go as high as 10 nominees for the top prize, lately they’ve settled for eight or nine. It almost beggars belief, but up to a third or half of those nominees could come from the big, red N.

Dolemite is My Name 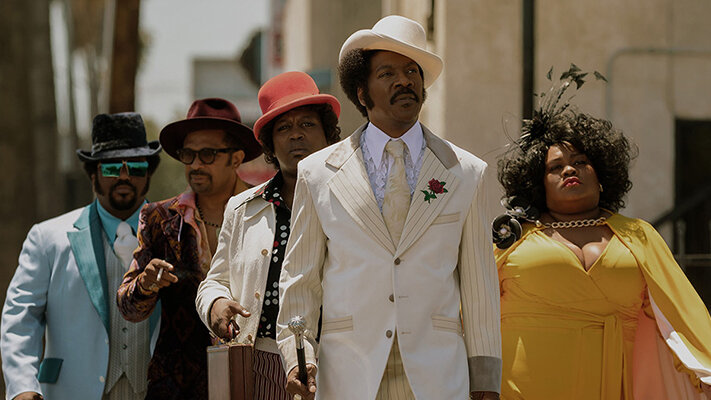 It may be hard to believe, but Eddie Murphy hasn’t been in a film since Mr. Church back in 2016. And if you’re not one of the 12 people who saw that, then really, Eddie’s last movie was the Razzie-nominated A Thousand Words in 2013. His last “good” movie was Tower Heist, a whopping eight years ago. For a man who used to be in just about everything, regardless of quality as long as the money was right, it almost doesn’t seem possible that he’s gone this long without even a movie role, much less a hit.

Well, worry no longer, because Dolemite is My Name is Murphy’s best film since Dreamgirls, which earned him an Oscar nomination, and he deserves one here, too. It might even be his best work since Coming to America. I don’t say that lightly. As the late comedian and blaxsploitation star Rudy Ray Moore, aka Dolemite, Murphy gives what could be the best performance of his career, in an uproariously funny and poignant story about a man who will do whatever it takes to make it big.

Assisted by a very strong, almost entirely black supporting cast, including Craig Robinson, Tituss Burgess, Keegan-Michael Key, Da’Vine Joy Randolph, Snoop Dogg, and Wesley Snipes (in a comedic turn so far off type that he too deserves Oscar consideration), Eddie Murphy not only accomplishes the task of telling a competent biopic story, but also just has a lot of fun showcasing great talent. From working in a record shop, to adapting the rantings of the homeless for his iconic stage character, to the production of the Dolemite film which evokes images of The Disaster Artist (except that everyone’s having a good time), Murphy and director Craig Brewer (Hustle & Flow) strike some serious blows for representation while making us laugh and applaud the whole way. I sincerely hope Eddie gets his due. Adam Driver and Scarlett Johansson have both had amazing years, and the capper might just be this film, which leads the Golden Globes with six nominations, including leading nominations for the two of them and a Supporting Actress nod for Laura Dern. Noah Baumbach gets the best out of a brilliant ensemble cast, and gives them a screenplay worthy of consideration as well. In one particularly great bit of cleverness, performance notes between the leads actually serve as meta hints about the scene the actors are in, and where they’ll go down the road.

Following an opening montage in which Charlie (Driver) and Nicole (Johansson) narrate all the positive qualities in each other as people, lovers, and parents, the film quickly jars us out of our reverie into the real story – that the two are about to get divorced. Charlie is a successful avant garde theatre director in New York, who frequently cast Nicole in his plays, after she gave up her film career in Los Angeles. Using a TV pilot as a means to separate herself, she takes the couple’s young son Henry (Azhy Robertson) with her, mostly for moral support, but also because her entire family lives out west. While she’s shooting, the show’s producer recommends an aggressive divorce lawyer (Dern, about as against type as you can get), who takes an almost manic glee in taking exes for all their worth. Before long, what could have been an easy “conscious uncoupling” has both sides fighting for every inch, particularly where to live and who raises Henry.

Charlie and Nicole wanted an amicable separation, and Charlie mentions multiple times that they agreed not to even get lawyers involved, but Dern’s Nora isn’t having it, and therefore neither is Nicole. The opening montage is almost instantly forgotten as the divorce spirals into acrimony, mostly because Charlie and Nicole don’t really know how to communicate with one another. But it is telling that the one trait both sides noted as a positive in the other is their sense of competitiveness, which plays out as the proceedings devolve. The characteristics that were once praised in each other become their respective obstacles, particularly Charlie being too trusting (not getting a lawyer until the deadline because he still believes this will be done out of court) and Nicole being prone to mood swings (accusing Charlie of gaslighting her simply for disagreeing with her approach).

Thankfully, things never get so bad as they did in the film’s spiritual predecessor, Kramer vs. Kramer, which despite being a Best Picture winner is a movie I utterly despise. And while the anger and legal tactics can get to be a bit much (especially when Charlie dumps his passive original lawyer played by Alan Alda in favor of another pit bull to challenge Nora played by Ray Liotta), the film remains grounded in the basic humanity of the leads. No better is this exemplified than in a late scene at a New York piano bar where Charlie gives an impromptu performance of “Being Alive.” My inner theatre nerd squees at the Sondheim. Driver and Johansson soar because they both do such a great job at playing people who can speak volumes to the world but barely an honest word to one another. 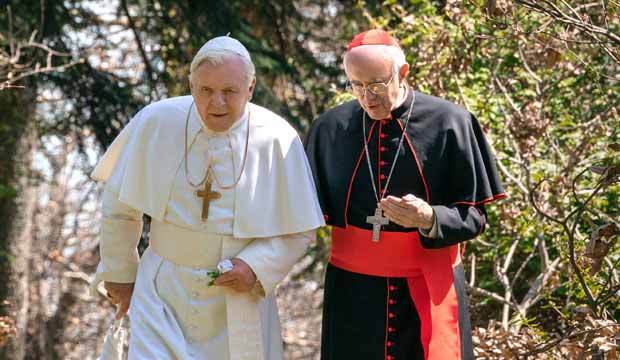 I am not a Catholic. Never have been, never will be. Honestly, you can barely even consider me a “Christian,” in that I don’t believe in the Judeo-Christian version of God, and I consider “The Bible” to be a good work of moral fiction at best, but I do still celebrate the holidays, and can go to church if needed/wanted. I don’t reject the possibilities of the faith, or any faith. It’s just that I’m not buying what they’re selling without any proof. Still, the history, traditions, and ceremony of the Catholic Church have always fascinated me, especially in the wake of decades of social and political scandal surrounding the treatment of pedophile priests and their victims. I have witnessed two papal conclaves in my life, and it’s the subjects of those two elections that are of focus in this film.

Based on a play by Screenwriter Anthony McCarten, The Two Popes is a largely imagined story about a meeting between Joseph Ratzinger, aka Pope Benedict XVI, and Jorge Bergoglio, aka Pope Francis. A sort of Vatican take on My Dinner With Andre, the film posits the two as bastions of competing factions within the Church. Benedict (Anthony Hopkins) represents the conservative Church, almost Hell-bent (if you’ll forgive the pun) on maintaining tradition for tradition’s sake, regardless of the changes going on in the larger world (of which 1/7 identifies with this institution), while Francis (Jonathan Pryce) is a reformer who, based on his inaction in the face of injustice during his Argentinian upbringing, is driven to adapt the practices of the Church to the changing times, while keeping the message the same.

After the 2005 conclave that elects Benedict (Bergoglio apparently came in second), Jorge is ready to retire as a Cardinal and simply serve as a parish priest, and in 2012, he travels to the Vatican after receiving no answer from Benedict regarding his resignation. As Benedict notes, the two agree on practically nothing, but he wanted to meet his rival in person before deciding what to do. That decision is ultimately not to accept Bergoglio’s resignation, but to resign the papacy himself, in hopes that Bergoglio will be voted to succeed him, and thus swing the pendulum and see what new directions the Church can go into, especially as his leadership has only been met with more scandal.

The overall story is interesting, but really, the entire film hinges on the performances of Hopkins and Pryce. Both do an admirable job (though if you’re going for accuracy in appearance I would have preferred Mark Rylance to play Francis), playing off each other with a skill that only comes with decades of experience. It was also a bit intriguing to see some of Francis’ past, particularly the incidents during the 60s and 70s when he wasn’t as saintly as he acts now. The fact that Jonathan Pryce also played the High Sparrow in Game of Thrones only adds to the somewhat off-putting nature of Bergoglio’s early days in the Jesuit order. That last bit has no real relevance to the film, but it’s a fun tidbit to keep in the back of your head as you watch.

Thus concludes our coverage of Netflix in 2019. Only a few days remain in the year, and there are still quite a few films to see. Before you know it, we’ll be full-on into the annual Oscar Blitz! Netflix is betting heavily on these films to bring home the top honors, and if they do, it could radically change how we watch movies going forward. We’ll just have to wait and see what happens, but no matter how they’re distributed, the quality of the works themselves can’t be denied.

Join the conversation in the comments below! Have you seen the Netflix 6? If so, which was your favorite? Can the Academy give out a special Oscar for fucking up motherfuckers? Let me know!

One thought on “DownStream – Netflix and Shill, Part 2”