The death penalty is always a touchy subject in this country, mostly because of deep-rooted biases in the states that still practice it. It isn’t exactly racial bias, or a bias towards justice, or deference for law enforcement. There’s no one, singular cause that the capital crowd fights for, but whatever their motivations, the issue boils down to one simple truth: if you believe in the death penalty, you are by definition okay with the concept of state-sponsored homicide.

And I include myself in that group. In the vast majority of cases, I feel execution is not justified. For me, there are only two instances where death is appropriate. One is in a crime so heinous and obvious that there can be absolutely no doubt of guilt (I’m talking cameras definitively showing a person mowing down a group of civilians in broad daylight obvious), and where the only other option is life imprisonment with no chance of parole. In that case, either way the guilty party dies in prison. The other instance is for war crimes, genocide, and other crimes against humanity perpetrated by politicians, particularly those who feel insulated against justice or scrutiny because of their office and power. When they fall (not if, when), I feel they deserve to fall harder and faster than anyone else.

In those very specific cases, yes, I’m perfectly fine with a representative of the government pulling the proverbial trigger to take a person’s life. And I say the government specifically, because I also own the fact that, even in these extreme circumstances, I personally could not kill a man. I get angry about a lot of things, most of them petty in the grand scheme of the universe, but no matter what someone’s done, I don’t think I have it in me personally to end another human being’s existence.

All of this is my long-winded way of saying that I remain eternally surprised that there are millions of people in this country that are not only okay with execution, but who celebrate the concept. This is in spite of numerous studies that prove it’s not a deterrent, the fact that statistically 1 in 9 death row inmates right now are actually innocent (and two more ended up there due to inadequate legal defense), and the fact that in at least one case, it’s all but been 100% proven that the State has executed an innocent man. Even still, if that’s your sense of morality, so be it. If you believe that in-kind retribution is warranted, that’s your prerogative. What boggles my mind is that there is a significant number of people in the U.S. who take a manic degree of glee in the prospect of our government killing its own citizens.

It is in combating that attitude that Bryan Stevenson has made his career. Featured in an HBO documentary earlier in 2019, his first major case is dramatized in the new film, Just Mercy. The film focuses on Stevenson (played by a stoic and dignified Michael B. Jordan – God what I wouldn’t pay to see a movie where he, Denzel Washington, and Sidney Poitier were three generations of the same man and/or family) moving to Alabama after graduating Harvard Law (and growing up in Delaware, FIRST STATE REPRESENT, MUTHAFUCKAS!) and taking up the cases of a slew of death row inmates, some of whom were railroaded by a trigger-happy judiciary, and others who are clearly about to be conveniently murdered for the crime of being black.

The man condemned in this case is Walter “Johnny D” McMillian (Jamie Foxx at the top of his game), a woodworker in rural Alabama, falsely accused of the murder of 18-year-old Ronda Morrison. His case represented an impossible worst case scenario for a black defendant in the south. First, the victim was a young, white woman, which by itself can make national news (don’t believe me, google “Natalee Holloway”), and place insane pressure on law enforcement to make someone pay for the crime. Second, McMillian was known in Monroeville, AL as a philanderer who had an affair with a white woman (his son also married a white woman), which is legal, but scandalous in the deep south. Third, Alabama is the rare state that has “judge override,” a legal tool that allows elected trial judges to overrule a jury. This is why you’ll see political ads in the southern states for judges that literally run on the prospect of harsher sentences and sending people to death row. They aren’t upholding the law, but playing to a base and keeping campaign promises to get reelected. This gave the judge in McMillian’s case, Robert E. Lee Key (I’m not kidding, that’s his name) incentive to “look tough” and draw sympathy and support for “doing right by that poor girl’s family.” As such, after moving the trial to a white county where a nearly all-white jury convicted McMillian, he overrode their sentence of life and ordered his execution, an action taken after remanding McMillian to death row for over a year to await his trial, which lasted just over a day.

It’s easy to play the race card with cases like this, but here it’s completely warranted. A black man had the audacity to sleep with a white woman, so the moment another white woman dies and the pressure is on to capture and kill the monster who did it, the target immediately fell on McMillian. As Foxx himself notes as Johnny D, in Alabama “you’re guilty from the moment you’re born.” 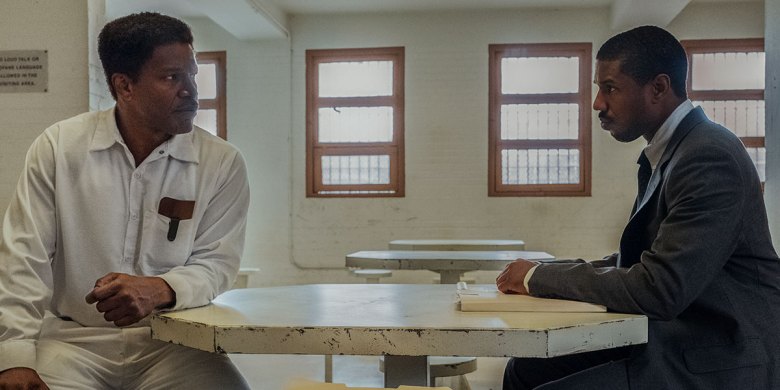 Stevenson has an extreme uphill battle from the moment he arrives, because it’s not just the racism inherent in McMillian’s case (arresting officer Sheriff Tom Tate, played by Michael Harding, is on record using racial epithets over the course of his 30 years in office and counting), but the apparent murder boner of the entire state. Before Stevenson even shows up McMillian’s been denied appeal four times, despite the fact that exculpatory evidence was withheld, defense witnesses that definitively placed McMillian some 10 miles away from the crime were ignored, and as is revealed later, the prosecution’s star witness, career criminal Ralph Myers (Tim Blake Nelson) was coerced by Tate to completely fabricate his testimony. The deck isn’t just stacked against McMillian because he’s black, but also because Alabama’s got a hard-on for the electric chair. It’s a cognitive dissonance that suggests justice cannot be served, that the victim’s family somehow cannot have closure, without a man getting 50,000 volts shoved up his ass in a fit of governmental vengeance. Just from a practical standpoint, Stevenson’s legal perspective clashes, because his mandate is “find the truth,” whereas the judicial system in Alabama (at least the rural counties) starts with, “Well, someone has to fry for this,” and works backward until they can find either the culprit or a convenient warm body.

It’s remarkably telling, as Monroeville is constantly noted as the town that inspired Harper Lee’s “To Kill a Mockingbird.” The irony is palpable as local officials talk out of both sides of their mouth, holding nothing back of their rage, hatred, and lust for Johnny D’s execution, mocking and/or warning Stevenson for even getting involved, before turning it around and encouraging him to visit tourist trap exhibits celebrating a book that shows how wrong it is to kill an innocent black man.

Stevenson is joined in his crusade by Eva Ansley (Brie Larson), a local lawyer and crusader for racial justice who in real life co-founded the Equal Justice Initiative with Stevenson and serves as its chief of operations. For the most part, she’s there to be an audience cipher, a bridge between the racial elements of the film and the legal ones. She also serves as the target for rednecks looking to silence a “lover” of a certain racial slur. We’ve all heard the term before. You know what I’m talking about. Let’s just move on.

While her role is fairly one-dimensional, Larson does well with the material. More than anything else, she’s able to ground Stevenson’s idealism with the reality of his environment. In a completely supportive but platonic role (thank God), Eva is able to keep him focused as Tate and D.A. Tommy Chapman (Rafe Spall) put up every roadblock imaginable to the case, including arresting a friend of McMillian’s son (Darrell Britt-Gibson, aka “Shitstain” from You’re the Worst) after he swears an affidavit contradicting Myers’ testimony. Chapman is an interesting character, because like Judge Key and Sheriff Tate, part of his bias is towards reelection rather than justice. Even though he wasn’t the original prosecutor in McMillian’s case, it’s important to him to see the sentence carried out, if nothing else than to prevent the shame of having to admit his office got this one wrong. His antagonistic role is no less infuriating than Tate’s, but there is at least some non-racial qualification to it.

Really, the performances all around are strong. Foxx carries the emotional weight of every scene he’s in. Jordan lends much needed gravitas to the proceedings without slipping backwards into melodrama. Larson is assertive and caring. Even O’Shea Jackson, Jr., in a limited role as a future client of Stevenson’s, is able to show a deeply human side to the people society throws away, regardless of guilt or innocence. The prison system is very much “out of sight, out of mind,” yet Jackson gives us a very real, very believable perspective of the type of people in these situations who just want to be acknowledged as human beings and treated fairly.

The overall plot is fairly straightforward. The only suspense is in the result of McMillian’s case, and given its notoriety and the Stevenson documentary, there really isn’t much of it. Like a lot of historical films, the crux is the journey in getting to the known destination. In that respect, this is pretty by-the-numbers. You get stories, flashbacks, setbacks, a second act climax that is meant to leave you wondering if there’s any hope, and then eventually the resolution everyone pretty much knew was coming.

But that doesn’t mean the time is wasted. Thanks to the performances and the overall inspirational nature of the story, it’s hard not to be invested in this from beginning to end. Some moments might feel trite from time to time, and as I said, pretty much everything is predictable, but when it’s delivered by actors who could captivate just by reading your junk mail to you, is there really a problem? And if they can do all of that while drawing needed attention to one of the major social issues of our age, showing just how easily the system can be corrupted and justice miscarried, how do you not get behind it and celebrate all the little victories you can?

Join the conversation in the comments below! What film should I review next? What are your views on capital punishment? Should the film industry be involved in political issues at all? Let me know!