I’ve noted in this space multiple times that I do not care for remakes and reboots, because more often than not, they’re just cynical cash grabs by the studios, taking advantage of an audience that doesn’t care to notice. Every once in a great while I do enjoy them, though, and will watch them with fervor if given a compelling reason (the best recent example I can give is the Coen Brothers’ version of True Grit; if there’s anyone I’d trust to bring something new and unique to the material, it’s them).

However, there is one universal exception that I make to my “Remake Rule,” and that’s adaptation. The beauty, and the thrill, of the adaptive process is for a writer, and later a filmmaker, to put their own unique interpretation of a classical piece of art (be it visual art, literature, theatre, etc.) on display for the world. It’s like a book report laid bare before us all, and in that sense, while the overall plot points might be the same, the overall product is unique and personal. And while it sometimes might get cheesy and overwrought – take any of the seemingly millions of versions of A Christmas Carol for example – there’s rarely a sense that the whole process is just being done to make the studios a quick buck.

That’s part of the reason I cast aside all biases and apprehensions when I learned that there would be a new film version of Little Women in 2019 – amazingly the seventh cinematic adaptation of Lousia May Alcott’s classic story – and that this version would be written and directed by Greta Gerwig, who had won my heart years ago as an actress, but put it on lockdown when she wrote and directed Lady Bird two years ago. There are few filmmakers out there who can truly grasp characters like Gerwig can. She has an innate empathy with the emotion, motivation, and normal humanity of her characters that almost no one can match, which makes her the perfect person for this latest telling of Jo March and her sisters.

What makes this version of the story unique is Gerwig’s masterful ability to find the moments of joy in all of the March family’s “domestic struggles,” as Jo calls them. The film opens with a slate featuring a pithy quote from Alcott about her career that sets the tone for the entire proceeding: “I had lots of troubles, so I write jolly tales.” It’s that mantra that pervades everything in this film. Gerwig shows us all the sad things that happen in the story, from poverty to war to disease and death to lost and misplaced romance. But all of it, all of it, is framed within the context of a joie de vivre, not just for Jo, but for all involved. It’s about finding the happiness in all parts of life, and not in a naïve, “Polyanna” style of being glad for the sake of it, but with the wisdom of knowing what’s really important in life, and how much the big and little things influence it and shape us into the people we are.

Presented in a non-linear format beginning in 1868 and jumping back as far as 1861 before moving forward, the main focus is on Jo March (Saoirse Ronan, giving yet another Oscar-worthy performance), living in New York and trying to make it as a writer. She’s able to sell salacious pulp to a local fiction magazine, but only with significant edits. She informs her editor (Tracy Letts) that she’s working on a novel, and he advises that it must be short, sweet, and if the main character is a woman, she has to either be married or dead by the end, because that’s what sells.

Discouraged but empowered, Jo returns to her boarding house, where she serves as a tutor to the owner’s daughters and lives a somewhat Bohemian life of writing and going to the theatre. She has attracted the eye of Friederich Bhaer (Louis Garrel of The Dreamers), but spurns him when he criticizes her work.

Meanwhile, in her hometown of Concord, MA, her older sister Meg (Emma Watson, another nomination-worthy performance) is happily married with children, though she feels the pressures of poverty. Younger sister Beth (Eliza Scanlen) is ill, and youngest sister Amy (Florence Pugh of Midsommar, also worthy of Supporting Actress consideration) is in Paris as a companion to the elitist old Aunt March (Meryl Streep, getting basically every one-liner). While there, Amy is preparing to get engaged to the wealthy Fred Vaughn (Dash Barber), but her plans are put in doubt when she encounters neighbor and lifelong friend Theodore “Laurie” Laurence (Timothée Chalamet, rebounding from his lackluster performance in The King), who Jo affectionately calls “Teddy.” 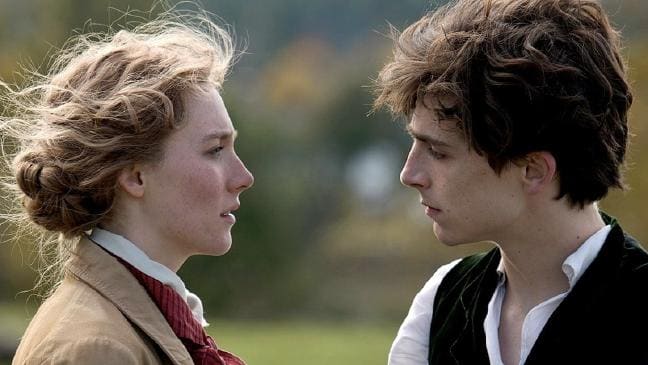 It’s at this moment that the film flashes back seven years to a dance that Meg drags Jo to. While Meg runs off with her more posh friends, Jo retreats to a parlor where she meets Laurie for the first time, and they immediately hit it off. One of the singular greatest scenes of 2019 cinema sees the two of them fake pretending to dance – a mixture of a Viennese waltz and just plain old 19th century moshing – outside and between the windows of the grand house where the party continues indoors. In their somewhat serious quest to not be seen, the two end up having way more fun than they could have had indoors, and develop an instant rapport, not just with each other, but with the audience as well. When Meg hurts her ankle and Laurie takes them home, he becomes an adopted member of the family, and we get to experience first-hand the dedication, love, and joy all the March girls (as well as matriarch Marmee, played by Laura Dern) have for one another. It’s a single moment of pure beauty that carries the mood for the entire film.

From that point on, most of the story is structured in split scenes that either mirror or juxtapose one another visually, but maintain the same tone. Shy Beth plays piano at Mr. Laurence’s house (Chris Cooper), a solitary moment of happiness for her, which is cross-cut with Meg going to a debutante ball, where much more extravagant music plays, and she gets the little tastes of high society that make her feel beautiful and important. Amy sketches a portrait of Laurie and gives it to him in Paris, along with a pencil drawing she made of him years before at the beach, which itself mirrors a scene in the film’s present when Jo takes Beth to the sea to help with her convalescence.

For Jo, her only true concern is losing her sisters – be it figuratively or literally – especially after an early spat with Amy nearly leads to tragedy. There is no greater loss for the tomboyish waif than for her or her sisters to fall into traditional female roles and simply abandon their talents for marriage. When Meg is about to marry the kind but dullard John Brooke (James Norton), Jo proposes that they run away so that Meg can be a famous actress. When Beth’s illness takes a turn for the worse, Jo rushes home from New York, bent on saving her so that they can always be together.

It’s that devotion that makes the sad moments all the more personal, but the happy moments all the more joyous. There’s a giddiness on the faces of the girls as they surprise Beth with Mr. Laurence’s piano that’s felt all the way through the screen and into the auditorium. When Mr. March (Bob Odenkirk) returns from the Civil War on Christmas, Amy excitedly tosses a bowl of popcorn in the air and runs to her father, and had I been eating popcorn at the time, I probably would have done the same. Gerwig’s deft touch makes us feel these wonderful moments as if we’re part of the family, and it’s a gift that just keeps giving as the film goes on.

And then of course, there are the artistic aspects. Alexandre Desplat creates yet another masterful ambient score, full of subtlety and emotion. The costume designs are out of this world, particularly one winter number that has Jo in a bright blue dress with a red scarf and a tam-o-shanter that lights up the entire screen. The production design and set decorations are lovely thematic mirrors in the story, with Jo’s attic writing room at the March home being a perfect companion for her attic space in New York. It’s a vision that comes together almost perfectly, acting as an ideal complement to the crisp writing and insightful character study Gerwig has put on screen.

This is very likely to be that rare PG-rated movie that earns a Best Picture nomination when the Oscar nods are revealed in just over a week. Honestly, I can’t argue with it. Two years ago, Gerwig was the unfortunate third wheel when it came to the great filmmakers of 2017, with Jordan Peele winning Original Screenplay honors for Get Out and the Academy deciding it was Guillermo del Toro’s turn to win, even if it was for a movie about a lady fucking a fish. Sadly, this all left Gerwig as the odd one out. Hopefully we’ll see that wrong righted with a Best Director nomination for her this time, or at minimum a win for Adapted Screenplay. Along with that, you have deserved talent that should be recognized for Best Actress (Ronan), Supporting Actress (Watson and/or Pugh), Original Score, Production Design, and Costume Design. With all these forces put together, how can you objectively not put it up alongside the best movies of the year?

Join the conversation in the comments below! What film should I review next? What are your thoughts on adaptation? Do you think Quentin Tarantino would cast Florence Pugh after how passionate she gets about proving how perfect her feet are? Let me know!