The Oscar nominations are right around the corner, and I’ve still got a pretty sizable backlog of movies to review. Thankfully, I can give you two for the price of one (or a billion, it’s all free) with one more edition of “DownStream.” While not nearly as aggressive as Netflix, Amazon Prime has put out a respectable For Your Consideration campaign for two major films, as well as a documentary and foreign entry that I’ll address separately later on down the road.

For now, though, let’s stick to the two main entries, solid commercial films with A-list actors and some artistic/technical elements looking for some serious attention from the Academy.

Adam Driver stars as Daniel Jones, an intelligence expert working for Democratic Senator Dianne Feinstein (Annette Bening getting Supporting Actress consideration). He is tasked with compiling a comprehensive report on the CIA’s “Enhanced Interrogation” program put in place after 9/11. What was supposed to take a year and maybe last a few hundred pages ended up taking more than five and comprising a massive 6,000+ pages, detailing the lengths the CIA went to in order to get intel from captured combatants and those linked to terrorism, even though none of the information was reliable beyond what was already known. Although only an executive summary was released, the report on America’s 21st Century torture practices has been a stain on the agency.

Both leads do an admirable job, with Driver playing Jones as a passionate crusader for truth, while Bening tempers Feinstein with the wisdom of a statesman who knows how to negotiate with political opponents. The film has a clear agenda to drum up public support for a full, unredacted release of the report, which both the Obama and Trump administrations have fought against. It’s even more poignant in the here and now, as one of the proponents of the torture program, Gina Haspel, now runs the CIA, and Secretary of State Mike Pompeo has gone on record just in the last week trying to discredit the report, saying torture isn’t torture, and even if it is, it gave us valuable intel (it didn’t), and we’re allowed to torture because we’re America, fuck you.

There’s not much to the film beyond the lead performances, as much of the intrigue is in the process of compiling the report itself, which consumed the lives of Jones and his staff for years. The periodic updates he gives Feinstein, coupled with graphic depictions of the practices and the actual relationship-forming that actually yields results is compelling, but ultimately inessential. The mental gymnastics officials from both parties do to prevent the release of information is also intriguing, because they seem to create the very circumstances they wish to prevent by stopping the report’s release. 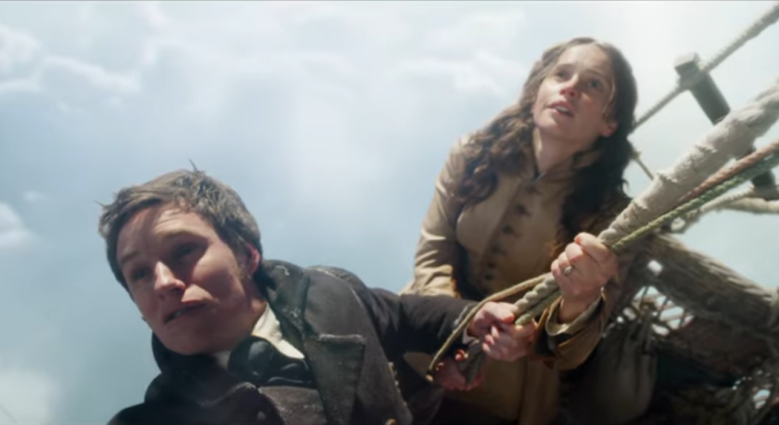 I initially had no intention of watching this movie. In fact I included it in the December edition of “This Film is Not Yet Watchable.” Well, I can at least upgrade it to “watchable,” if nothing else, but it still isn’t a great movie. The visual effects are cheesy, and every flashback that leads up to the historic balloon flight is boring as fuck. Like every 19th Century science movie, Eddie Redmayne is young, brash, and searching for truth, while everyone else is just a stuffed shirt harumphing at the audacity of this upstart blaggard with no white hair or ridiculous mustache. I say! He should be given a royal caning, he should!

That said, the scenes in the actual balloon as it ascends to record heights are fairly exciting. Eddie Redmayne and Felicity Jones continue their natural chemistry left over from The Theory of Everything, and the enclosed space of their balloon basket makes for some intimate, and at times intense character moments. Also, the more they rise, the colder it gets, so kudos must be paid to the hair and makeup teams for all the ice, wind, and snow effects placed on them as the film wears on.

Beyond that though, this is just a mildly pleasant and forgettable film. The story revolves around a record-breaking hot air balloon flight, which proved that there are layers to our atmosphere, but that sort of discovery is given little weight in favor of manufactured danger and a plot convenient madness caused by oxygen deprivation. A dynamic character study between the two leads, coupled with the true magic of discovery could have made this a really interesting film. Instead, it settles for merely being adequate.

Join the conversation in the comments below! Did you see either of these films? Do you think they’re worthy of Academy consideration? Are there movies that you think meet the definition of torture? Let me know!