I’ll be right upfront with you guys. I don’t like Terrence Malick movies. With the exception of The Thin Red Line, every film of his I’ve seen can basically be reduced to two bullet points: Beautifully shot, but unbelievably pretentious. A decade ago, baffling praise was heaped upon him for The Tree of Life, which I absolutely hated. The camera work was gorgeous, but there basically was no plot, it dragged on for over two and a half hours, and there was a kid with the back of his head all messed up that was never once addressed. At the halfway point I remember screaming to my empty apartment, “WHAT THE FUCK IS GOING ON IN THIS THING!?” Even though he stole special effects from 2001: A Space Odyssey, I wholeheartedly believed that the “creation of the universe” sequence could have stood alone as the best live action short film of the year (except for the bit where the carnivorous dinosaur passes up a meal when it sees a sick snack like it somehow had the capacity for mercy), but everything else in that film was God-awful posturing from a man who epitomizes the idea of loving the smell of your own farts.

That said, I was more than happy to give a go to his latest outing,  A Hidden Life, which has been nominated for Best Film at the Independent Spirit Awards (though curiously not for anything else; I suspect now it was considered something of an obligation or favor). Seeing the trailer, again littered with beautiful scenery and colorful camera work, I was intrigued by what the plot implied, that of a conflicted man during WWII about how best to resist Hitler and still be considered a godly man in his church and community. I wondered if this was perhaps about a man who harbored Jews in his house, or who quietly formed some kind of resistance cell. Given Malick’s penchant for long, drawn-out shots of protagonists as they subtly emote, I admit I was more than just a little curious.

When I saw the finished product, however, it just confirmed that I should have trusted my initial instincts and stayed away. I love independent, arty cinema, so I’m always duped by the favorite son/sacred cow of the form. But just about every time, I’m left hating myself for being fooled yet again (shame on me), and hating Malick for wasting way too much of my time. As I’ve learned again and again from his work, a polished turd is still a piece of shit.

Set in Austria, the film begins in 1939, just as Adolf Hitler had invaded Poland and started the second World War. Franz (August Diehl) and his wife, Fani (Valerie Pachner) are poor but happy farmers working the land in a rural community. Over the course of four years, Franz is called in for military training while his wife stays home and raises their three daughters. Franz is a pacifist, but believes in fighting if it’s for the right reasons. When France surrenders to Nazi Germany in 1943, he is sent home, and life returns to normal.

This opening sequence makes up the first half hour or so of the film, with no spoken dialogue between characters with the exception of some low-volume background chatter in German. Instead, the soundtrack consists of slow tempo instrumental music underneath the narration of letters written between Franz and Fani. It’s a bit endearing, if a tad tedious. Checking the clock on my phone, the first English-language interpersonal dialogue takes place about 17 minutes in.

The central conflict finally emerges about 45 minutes in, as a few locals get called up for service and others volunteer. The war is not ending as expected, and Germany – which controls Austria-Hungary – needs soldiers. Franz refuses to volunteer, as the first rule of any active member of the army is that he has to sign a document declaring loyalty to Hitler and the Third Reich. Franz rightly believes that Hitler is an evil man, and will not fight for him. He’ll fight for his country if needed, but he will not swear fealty to someone who acts against his morals and beliefs.

Initially respectful of his decision, Franz’s neighbors and rural town become increasingly annoyed to the point of outright hostility and violence towards him and his family. He continues to refuse, not just to serve, but to give food and money to the “war effort,” occasionally even turning away soldiers who come to collect at his door. 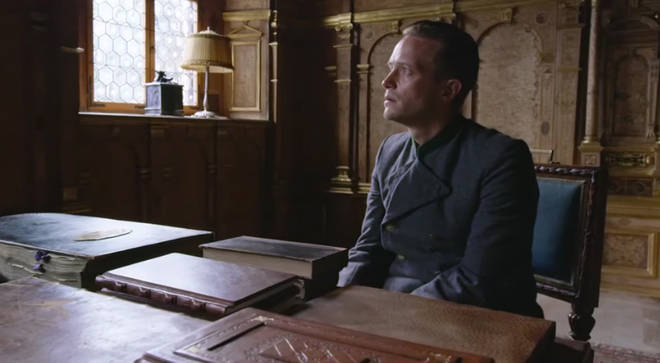 Now, there’s some really interesting ground to cover here. Everyone Franz encounters, from friends and neighbors to family and clergy, tell him to sign the oath, if nothing else than for the sake of his family, who are being shunned and assaulted, but he will not. There’s a scene much later where an attorney flat out tells him, “Just sign the document and believe whatever you want in your heart.” It reminded me of Silence from a few years ago, and how Andrew Garfield and his Christian converts were willing to die rather than place their foot gently on an image of Jesus, thus making them apostates in the eyes of Japanese laws which banned Christianity in the middle ages. I remember thinking to myself, is it really worth getting your head chopped off for this? If God really exists, surely He cares more about what’s in your mind and heart than whatever actions you take to appease an oppressive force. He wants you to live and surely He’d forgive you. It shocked me that such a logical suggestion was never even brought up.

But then I realized that it’s an apples and oranges comparison. With the Church, you’re performing these acts for an invisible being that may not even exist, and may never have existed, therefore it makes reasonable sense to take life-saving action. When it comes to Hitler, though, you’re signing a legally binding document, meaning you’re consenting to whatever the Nazi regime does, and whatever punishments they decide you deserve if you disagree. We also know with the advantage of hindsight (and something that Franz himself guesses), that once Germany loses the war, members of the Nazi party are shunned by German and European society, making it impossible to make an honest living afterward, and some are imprisoned or executed by the Nuremberg trials. This isn’t a formality to save your life and benefit your family. This is a commitment you’re making without knowing the consequences, so there is reason as well as morality in Franz’s conscientious objection. Coupled with the constant images of scythes and sickles in the farming scenes, it serves a grand visual metaphor of the omnipresent spectre of death itself.

There’s even a parallel to be drawn to modern society. We live in a world where fascism is back on the rise, where hatred is leading governments and people to fight among themselves rather than advancing the cause of freedom. Here in the U.S., our own President publicly eviscerates opponents and political allies who do not pledge full loyalty to him. It’s partly how the Russia investigation got started, because the head of the FBI wouldn’t swear loyalty to Donald Trump, so he was fired and then Trump bragged about it to Russian diplomats IN THE OVAL OFFICE, AND WE HAD TO LEARN ABOUT IT FROM RUSSIA STATE TV! We’re only a few steps away from the “disloyal” being arrested. Hell, he’s been trying to put the woman who got more votes than him in jail for the last three years (with yet another investigation concluding with no evidence of a crime being committed, mind you). It’s a very real threat, and a film like this could drive the importance of resistance home to audiences around the world.

Unfortunately, such artistic and heady themes are abandoned in favor of stilted dialogue and an incredibly droning back half that essentially repeats the same cycle of scenes over and over again. At the two hour mark I actually looked up the run time on my phone (I was getting hungry), and found out I still had another hour of this to go! FUCKING MALICK!

Because you see, the latter two thirds of this film, once Franz gets arrested for his disobedience, is a constant repetition of the letter narration that opened the film. What was somewhat romantic at the start becomes an almost harrowing drudgery as we try to run out the clock. There’s never any variation on the messaging, either. There’s no evolution or advancement of the plot. Every cycle goes the same way:

Franz (narration as he wanders about the prison): Dearest wife. I am still in prison. It is not pleasant to be in prison. I hope you and the girls are safe. I will not be coming home.

Fani (narration as the community continues scorning her with increasing hardship): My dear husband. Life is not good at the farm. We are failing. Your children have no father. Everyone is abusing me. I wish you were not in prison.

Franz: Dear wife. I am still in prison. It is not pleasant to be in prison.

Fani: My loving husband. Life is not good at the farm.

THIS GOES ON FOR NEARLY TWO GODDAMN HOURS!

It would almost be tolerable if there were any story points that could elevate the proceedings, or actual dialogue to help develop the characters. But there’s nothing. It just keeps going back and forth, and like the opening montage, all the background dialogue is in German and at low volume (with occasional screaming), so unless you’re fluent in Austrian dialects, you’re forced to pay attention to this drawling bullshit. The first hour of the film takes place over the course of four years. The last two hours only span six months! And when things finally start to pick up at the end, and you find that some prisoners are executed via guillotine, Malick doesn’t even have the stones to show us! The one bit of action that could connect with an audience on a visceral level, and he leaves it up to your fucking imagination! You could have easily trimmed 75 minutes from this film and lost NOTHING!

I wanted to like this, I really did. I know I’m predisposed to hating Malick’s stuff, but I really did want to enjoy myself. This guy just cannot get out of his own way and pull his head out of his own ass! He’s got dazzling camera work, and a true story worth telling that in competent hands would have likely been among the best of the year. But as usual, Malick opts for the most boring and pretentious version of events, bringing the film to a grinding halt, leaving you in the theatre to bang your head against the back of your chair and pray to a God who is definitely not listening. It’s the cinematic equivalent of reading your emails out loud.

Join the conversation in the comments below! What film should I review next? Are you able to enjoy Terrence Malick’s films? If so, can I have whatever drugs you’re on? Let me know!