I know, I know. More than four months and that’s what I give you for a header? A lame cow pun? It’s been a while since I’ve posted an actual review on this site, and for that I apologize. The last several months have been a strain in more ways than one, but for our purposes here, it’s obviously down to the fact that we haven’t been able to go to the movies, and still have no clear date as to when we’ll be able to in the future.

For example, AMC theatres were scheduled to reopen a week ago, July 15th, with the showcase films being Christopher Nolan’s Tenet and the live-action Mulan remake. However, both of those movies have had their debuts pushed back yet again, with Mulan not coming out until at least mid-August (God help me I’ll probably see it just to see SOMETHING, even though I’d bet dollars to donuts it’s going to suck dragon balls), and Tenet being pulled from Warner Bros.’ release schedule indefinitely. As of this publish, AMC is still planning to reopen on July 30th, but with continued COVID setbacks (including California rolling back its reopen to Phase 1), who knows if that will hold.

I bring all this up because when I started this blog two years ago, my intention was to give anyone who cared to read it as much advance warning as possible when it came to new movies, specifically which ones were worth your money to actually go out and see. On average, movie prices are anywhere from $10-$15 for a standard screening, and it’s gotten more expensive with the pandemic, as the few films that deign to do a home release charge at least $20 for the privilege of “renting.” Hopefully once the box office system normalizes itself, I can get back to that original goal: see as much as possible, then tell you all in short order what to see and what to avoid.

But no matter how the business model holds up, the point of this blog was to offer advice on things you as a member of the general public could actually see. I saw First Cow on Sunday, March 15th, just over four months ago. It was a spur of the moment decision prompted by my now ex-girlfriend, who knew not being able to see movies would make me miserable, so the moment Los Angeles mayor Eric Garcetti announced that the city was shutting down at midnight that very evening, she insisted we go see something, because it would be our last chance for the foreseeable future. There were four other people in the auditorium that night who came for the exact same reason.

Initially, I was planning to write the review the very next day, but then it occurred to me that there wouldn’t be any point. If audiences couldn’t actually go see it, then why bother? If I hated the movie, no one would care, and if I loved the movie, it would only serve to tease what they couldn’t enjoy themselves.

See it. It’s really quite good, and a testament to its quality that it still feels fresh in my mind 129 days later.

Director Kelly Reichardt (Certain Women and Night Moves) creates a truly enjoyable tale of friendship against the backdrop of the Old West by focusing on emotional intimacy, not just with her lead characters, but also with the frontier setting of the film itself, as the movie is shot in a 4:3 box aspect ratio. She also makes clear that the ultimate fate of the leads is irrelevant, as their skeletons are discovered by Alia Shawkat in the very first scene. Right upfront she tells us that this is a fleeting tale of long-dead people. It’s not important that they’re dead, but how they lived. 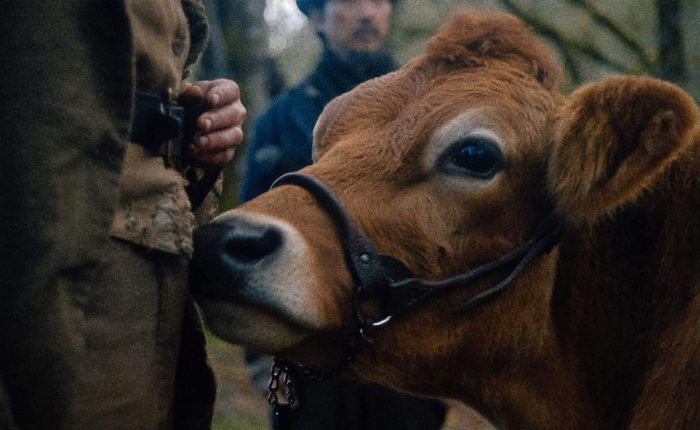 Cast specifically to be as “anti-Western” as possible, John Magaro stars as Otis Figowitz, better known as “Cookie,” as he freelances as a cook for parties of fur traders. Meek and unassuming, Cookie’s skill with food is unparalleled in the area surrounding a small Oregon territorial outpost. He keeps his head down, does his job well, and does his best to keep out of the toxic masculinity and squabbles of his erstwhile colleagues. One night, he comes across a Chinese immigrant named King-Lu (Orion Lee), on the run from bounty hunters after killing a Russian man in a scuffle that got out of hand. Sensing his decency, Cookie hides him for the night and allows him to escape the next morning. Days later, the pair reunites at the outpost, and the men become fast friends.

King is an opportunist, a true believer in the American Dream, and feels that every chance a person has to advance himself in the world should be taken. Inspiration ignites when he tastes Cookie’s biscuits, loving the flavor and wondering if he could sell them. Fate offers a helping hand as it so often does in the form of Chief Factor (the always wonderful Toby Jones), who has procured the titular “first cow” in the Pacific Northwest. Factor plans to sell the milk and corner the local dairy market, but Cookie, in addition to his skills with the pan, is quite adept at animal husbandry, and he and King scheme to secretly milk the cow at night so that he can add buttermilk to his “honey cakes” and sell them even faster.

King, being a natural salesman, is able to maximize the profits of their little venture by selling a very limited supply to the various inhabitants and visitors to the outpost, making them crave more and fueling demand. They’re solicited by several colorful characters, including a transient with a raven played by the late, great Rene Auberjonois.

Magaro and Lee play off each other admirably, complementing one another’s skills in style and character. King is a boisterous counter to Cookie’s demure nature, and in return, Cookie keeps King grounded and focused on their next moves. Thankfully, both men are incredibly smart and self-aware. They know that they won’t be able to keep up this ruse forever. In such a small community, where Factor himself has the only proper house, people will eventually put two and two together. When Factor tastes Cookie’s wares and invites him to prepare a cake for one of his colleagues, everyone involved – be they character or viewer – knows that it’s only a matter of time before the scheme is exposed, especially since Factor’s cow won’t give milk to anyone else and seems to be, ahem, drained most of the days.

Reichardt makes it all work within the tightness of the frame. Whereas a film like First Reformed used the 4:3 format as a visual metaphor for the restricted nature of Ethan Hawke’s character, here it’s used to create a closeness between the players, a hint to the wider world to which they are trying to escape. It’s not closing them in, per se, but more inviting them to burst forth.

Take, for example, the living spaces. King and Cookie basically live in a shack in the woods. There’s nothing but two cots, a table, and a stove, and the whole structure is made of what looks like rotting wood. It’s easy to see this as a sort of purgatorial cell, but really, it’s something to appreciate, a starting point for the grander riches they both aspire to. At the same time, it’s a reminder that for many, the dream never becomes a reality, so there’s a homey, almost comforting quality to it. Compare that to Factor’s house, which while quite large, also offers an efficiency of space that allows not just for personal intimacy, but for logical mapping of the dramatic scenarios.

If anything, one feels more claustrophobic in the outdoor settings. Between King-Lu’s initial escape and the climactic pursuits towards the end of the film, the wide spaces of the Pacific woods seem awfully compact, with paths crossing a little too often to be believed beyond the contrivances of plot convenience. There’s one moment in particular when our heroes get separated, going in opposite directions, and within minutes they’re together again, with no indication that either changed their heading. I don’t know if it was done intentionally or if it’s an error in the story, but it was quite telling that the more space the characters had to roam, the more trapped they appeared to be.

On the whole, though, this was an endearing bit of character study, and a welcome subversion of Old West cinema tropes. This is way closer to Jim Jarmusch’s Dead Man than it ever will be to Unforgiven. The two leads give great performances in an unlikely partnership of convenience that turns into true brotherhood, anchored by the directing skills of an auteur at the peak of her creative powers (Reichardt won the “Bonnie” Award at this year’s Independent Spirit Awards). If you didn’t get a chance to see it before the world went to shit four months ago, I implore you to treat yourself now.

Join the conversation in the comments below! What film should I review next (whenever that may be)? What are your favorite takes on classic genres? Did you miss me? I missed you! Let me know!