Over the past year I’ve watched a lot of documentaries, mostly to get ahead of the Oscars whenever I got the chance. Even then I only saw 14 of the 15 shortlisted films (the last one comes out on DVD this week!). Anyway, the bulk of the docs were filled with some pretty heavy material: war, drugs, racism, and terrorism just to name a few. Even more lighthearted fare like Faces Places was somewhat melancholy due to Agnès Varda’s lamented past. Only Jane, which should have been nominated and awarded, felt like a truly joyful story, as it showed a ton of long lost footage of time with chimpanzees, as well as the budding romance between Dr. Jane Goodall and her first husband, Hugo.

Thankfully, we have Itzhak as an early year palate cleanser, a funny and delightful distraction of a documentary, showing slices of life and history of Itzhak Perlman, widely regarded as the greatest violin player in the world. There’s no agenda, no politics, and only hints of tragedy and strife in the distant past. Instead we see the unbridled joy of a virtuoso and his charmed life.

What little advocacy there is in the film is largely left to his wife Toby, who champions charity work and music education. Itzhak himself also now works as a teacher in addition to his touring and recording, and there’s a lovely sequence where he recounts his music education (home in Israel at first, then Juilliard), supplementing a lesson he gives to some of his own students, enraptured by the nuance of string performance.

The casual nature of the movie is established from the very first shot, as Perlman backs his scooter out of a van (he was handicapped by polio at a young age) wearing a New York Mets jersey, as he’s set to perform the National Anthem at a ball game. He’s playful on the field meeting the players, adds little fun embellishments to “Take Me Out to the Ballgame,” and cracks jokes with his collaborators, including a running gag about Alexander Pushkin’s bar mitvah. Right from the off we learn that Itzhak is a man of unending good humor, with a joie de vivre that can’t be suppressed.

That lust for life pervades every scene of the film. Wife Toby shares many a fond memory of their courtship (including how she asked him to marry her). He shares meals and laughs with iconic celebrities like Alan Alda. He improvises a rhythm line while rehearsing with Billy Joel, turning “We Didn’t Start the Fire” into something of an Irish jig. Side note: being a lifelong Billy Joel fan, I about jumped out of my seat geeking out at that one. 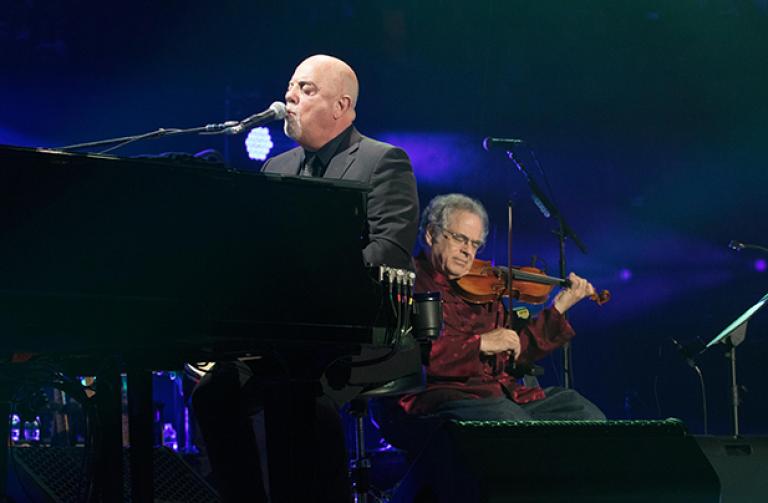 The entire movie isn’t sunshine and rainbows. There is talk about how his polio held him back from early opportunities. He also visits a violin salesman near his childhood home in Israel, who shows him fiddles dating back to the Holocaust, as many Jews had to entertain the Nazis to survive the death camps. Perlman was born as WWII ended, his parents having fled from Poland, but he still honors their legacy because it informs his life’s work.

But even those truly sad moments evolve into happiness. Polio held him back as a child, but he got to perform on Ed Sullivan, which brought many more opportunities to him. His heart breaks when he sees an old Jewish violin that an American had scarred by scratching a swastika on the underside of the face, but he uses it as a teachable moment and a chance for healing, aided by him playing the theme from Schindler’s List, which he famously recorded for the 1993 Best Picture winner (which also won Original Score for John Williams).

And that leads us to the very best thing about the film, Perlman’s playing. Throughout the film we get snippets of TV appearances and stage performances, with the pieces identified on screen. Even if you know little about orchestral music, you can tell his talent is singular. Watching his fingers move up and down the fret board is hypnotic. But what really ensnares you is his face. Perlman wears his emotions on every part of him, to say nothing of the sleeves. With every movement of the bow, you can see how the spirit of the music affects him. Sometimes he’s joyous and laughing. At other times he’s on the verge of tears. There is nothing pedestrian or by the numbers for him. He never just plays, and to get that captured on film is truly remarkable.

Now, let’s be clear. It’s unlikely this film will win any awards, or even be remembered by the time Awards Season rolls around again. And that’s fair, because honestly, the film is inessential. There aren’t any revolutionary filmmaking techniques. There’s no real story arc. There’s no agenda or thesis statement. Perlman himself states that he’s excited when he meets heads of state, just for the prestige, regardless of politics. This makes sense when we see him get the Presidential Medal of Freedom from Barack Obama, then see him have dinner with Benjamin Netanyahu, two almost diametrically opposed leaders from a political philosophy basis. It really is just a nice diversion, a profile into a master and his craft, showing us pure happiness, wit, and charm. Sometimes, though, that’s enough.

Join the conversation in the comments below! What film should I review next? Are there any documentaries you’re looking forward to? Is there such a thing as a non-Kosher pickle? Let me know!