Lauren Greenfield is a brilliant and accomplished photographer and documentarian, with great work like THIN and The Queen of Versailles to her name. Her latest effort, Generation Wealth, was one of the opening entries at the Sundance Film Festival this year, and has received decent press. However, I can’t entirely get behind it, mostly because I don’t care about any of the subjects beyond passing interest, and in the end, the movie turns into a self-serving commercial.

Presented in a way almost homaging the Up series of docs by Paul Almond and Michael Apted, Greenfield chronicles the last 25 or so years in the lives of rich and powerful people she’s interviewed and photographed over that time, as well as people who reached for wealth because of a desire for status before falling back to Earth. It’s an interesting premise, but the execution is a bit mixed. A lot of times, Greenfield narrates about how seeing someone gave her a brilliant idea, or something similar. It’s an odd, seemingly unintentional juxtaposition between someone who had foolhardy ambitions and someone who’s indirectly tooting her own horn while somewhat judging them via her camera.

What it all boils down to is that people get “addicted” to the idea of money and fame, and will go to great lengths to acquire it, even at great personal cost outside of the financial sphere. A former porn star had to humiliate herself. A German banker defrauded thousands of people. A woman who had a lot of excess skin and stretch marks after childbirth underwent dangerous plastic surgery. A young rural girl navigated the horrendous child pageant scene. All of these people have their own personal journeys and consequences (more on that in a moment), but again, any empathy or sympathy is undercut by Greenfield inserting herself into the proceedings, weaving in her own family issues, because she’s “addicted” to work. It’s a worthy angle to explore, but it feels out of place in this context. 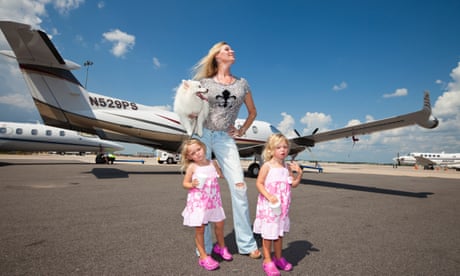 And ultimately, there are no real morals to the stories, other than a possible subtle hint for those not already born into wealth to not pursue it in the first place. The porn star retires to life as a bartender after miscarrying her 11th pregnancy (the first she decided to keep). The woman who got cosmetic surgery never corrected the skin problem, and her daughter killed herself due to her own body issues. A girl who looked like a model in a 90s photo now lives in the woods with her husband and two kids, but goes to the extreme of not allowing any outside media to influence her children’s lives, opting to brainwash her kids to the other end of the spectrum by making sure they get no information other than what she and her husband provide.

As for those who started off rich, they’re fine. The banker spent a year in jail awaiting a trial that never happened. The wealthy couple who tried to build a replica of the Palace of Versailles (as shown in Greenfield’s previous work) abandoned the project but still had front row seats at Trump rallies. The rich still get richer even as we’re being shown a visual parable about the love of money being the root of all evil.

There were two moments I was proud of, however. First is the fact that Kim Kardashian is shown repeatedly in archival footage via her sex tape. She’s one of the poster children of Greenfield’s thesis about how this quest for fame corrupts. It’s also a good reminder, as the entire Klan has it in their contracts with E! and other networks that they can no longer mention the sex tape, and must treat them all as legitimate celebrities who earn their fortune. Don’t believe me? Look at the fact that Forbes magazine just made the laughable assertion that Kylie Jenner was about to become a “self-made billionaire.” Yeah, when you become wealthy by signing your name to various endorsements because that family name already has inherent monetary value, that is literally the opposite of “self-made.”

Second, the banker’s son has several interview segments, where he’s joined by his girlfriend. For the first half of the film, the girlfriend doesn’t speak. Instead, she steals the spotlight (though sadly not the whole frame of the picture) with her facial expressions and body language, which make her feelings about her boyfriend’s father truly known. It’s fantastic.

The final act of the film sadly subverts Greenfield’s thesis once more. After all these interviews are done and the stories of their subjects told, the last 10 minutes is about Greenfield assembling all these photos and stories into a book that gets published as well as an art exhibit. So after all this talk about addiction and the quixotic pursuit of wealth, the film basically ends with Greenfield doing an impression of Jay Sherman’s standee: “BUY MY BOOK! BUY MY BOOK! BUY MY BOOK!”

This movie was released by Amazon after all…

One thought on “Everyone Has a Price, Including the Director – Generation Wealth”