One of my favorite shows from the past decade is HBO’s animated version of The Ricky Gervais Show, a podcast featuring Gervais, his writing partner Stephen Merchant, and former radio producer-turned-avatar for the people, Karl Pilkington (seriously, he’s my spirit animal). In the third (and final) season of the animated show, there’s a segment where Karl pitches a movie called Bryan’s Brain, about a small-time actor who, after coincidental car accidents and some futuristic medical science, gets his brain transplanted into the body of Tom Cruise, who for the purposes of this movie died during the filming of the as yet nonexistent Mission: Impossible 8, while Bryan gripes about watching Cruise in M:I 7.

On its face, the entire concept of this film is ludicrous, mostly because back in 2011, when the segment was recorded, no one realistically thought we’d ever get to a SEVENTH M:I sequel. Mere months later, we got the release of Ghost Protocol, the fourth film in the series. And now here we are, with the sixth installment in the franchise, Fallout. We’re literally one movie away from Karl Pilkington’s cinematic backdrop becoming not only plausible, but arguably a fait accompli.

But here’s the thing, unlike a lot of other movie franchises, the series still finds ways to feel fresh, even revolutionary, as it ages. And although this is the first Mission: Impossible film I’ve seen since the 1996 original, I was amazed at how much I enjoyed it.

Starting off after the events of the previous film, Cruise’s Ethan Hunt has disturbing dreams about Solomon Lane (Sean Harris), whom he captured in that movie. As I said, I’ve missed the previous four movies, but the expository mission briefing that opens the film gave me all the context and backstory I needed without having to scramble to put Rogue Nation on my Netflix queue. Lane has been transferred between multiple international jurisdictions, being interrogated at each one. His Syndicate is in shambles, replaced by a group of remnants calling themselves The Apostles, who seek plutonium to create nuclear weapons, and to free Lane. Assuming the guise of black market buyers, Hunt and his associates Luther and Benji (Ving Rhames and Simon Pegg, forming a hilarious dyad) try to secure the plutonium, only for the Apostles to get the drop on them.

Hunt decides not to sacrifice Luther, and in the crossfire, the plutonium is lost. As such, the CIA, led by Erica Sloane (Angela Bassett, doing a much better government ball-buster performance than Viola Davis in Suicide Squad), has decided to muzzle the Impossible Missions Force and send her own lackey along with Hunt and crew to recover both the plutonium and Solomon Lane. That lackey takes the form of August Walker, played by Henry Cavill, sporting the mustache that had to be digitally removed from Justice League. Walker is a big, tough, bruiser of an agent, who is initially a giant masculine thorn in Hunt’s side. As Sloane puts it to IMF Secretary Alan Hunley (Alec Baldwin), “You use a scalpel. I prefer a hammer.”

The agents head to Paris, where a Russian arms broker known as the White Widow (Vanessa Kirby) is setting up a deal for the plutonium and Lane with an Apostle who goes by the alias of John Lark. The Widow and her brother Zola (Frederick Schmidt) are the children of Vanessa Redgrave’s Max from the first M:I film. Hunt and Walker fight a man they believe to be Lark, and in the process are saved by Ilsa Faust (Rebecca Ferguson), another returnee from Rogue Nation. Once they save the Widow from would-be assassins, they join an operation to expose the Apostles, secure the plutonium to prevent a devastating nuclear attack, and end Solomon Lane’s threat once and for all. 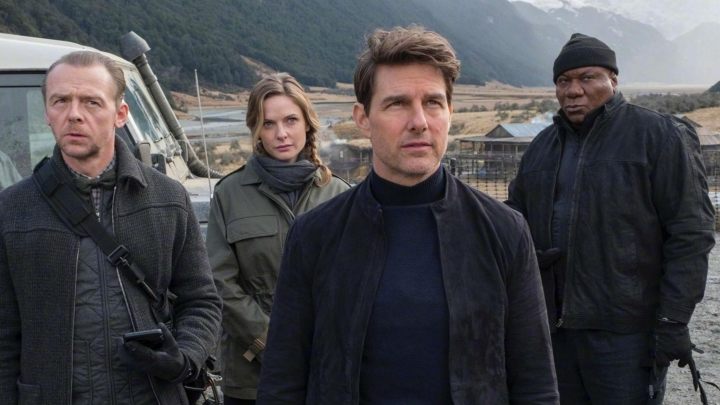 Now obviously there are quite a few action movie tropes at play here. Allies and enemies appear seemingly out of nowhere. We know going in that there’s at least one traitor in the group’s midst. Some of the accents are cheesy, even if they are the speakers’ natural voices. Bureaucratic obstacles will be thrown up just because. People will survive incidents that no human realistically could. We all get it.

But what really wowed me was how realistic it all felt. A big part of this is the lived in nature of the characters (only Bassett, Cavill, Schmidt, and Kirby are newcomers to the series). As I said, Ving Rhames and Simon Pegg are a gem together. But there’s also the relationship between Cruise and Baldwin, as well as Cruise and Ferguson (and one other that I won’t spoil here). All of these relationships have been established – along with some primer material for people like me who haven’t seen the last few films – and because of that we’re able to dispense with a lot of plodding exposition and get down to brass tacks.

This leads to two really strong elements that carry through the film. One is that there’s almost no real romantic or sexual tension. Yes, there are feelings hinted at and alluded to regarding Hunt’s personal life, but for the most part, it’s shelved in service of the greater mission. Honestly, a sight gag in a nightclub bathroom where some bystanders see multiple legs in a stall and assume a gay orgy is taking place is about as sexual as the film gets, give or take a few well-placed shots of Vanessa Kirby’s legs. That’s honestly amazing, as most action films devolve into cliché with damsel in distress characters and macho men surrendering to the throws of passion at inopportune times because… T&A.

The second, of course, is that we can really focus on the action set pieces, which are just spectacular. There are about four major moments, and all are executed almost flawlessly. Directors are finally taking notice that audiences don’t want a bunch of confusing jump cuts that just convey a sense of chaos. Instead, the fight scenes are amazingly choreographed and filmed in long takes that really make you feel like you’re in the moment (and that’s without shelling out the extra cash for 3D). The bathroom fight scene between Cruise, Cavill, and the man they’ve identified as Lark is masterful, almost on par with something out of the John Wick series. A climactic helicopter chase is the icing on a deliciously violent cake. And in between, you’ve got some great touches like a prolonged skydive where all sound is knocked out temporarily by a lightning flash, a couple of fun car chases, and few really well-timed bits of stabbiness, all punctuated with some really good, pithy banter.

Finally, and this is a small consideration, but it struck me as a plus, even if it was unintentional. Tom Cruise is 56 years old, but more often than not, he’s playing characters that are 35 tops. During some of the action sequences in this film, particularly when he’s running and jumping off of rooftops, his cheeks flap in the wind, allowing the audience to finally see his age. I doubt it was intended, but it humanized Hunt just a little bit more. Throughout the film there’s suspicion surrounding Hunt about how much damage a life of espionage has done to him, and whether he would finally snap and betray his government. Moments like those brief cheek flaps and shots of wrinkles in the wind hint at a weariness that would just seem tacked on if it was addressed in dialogue. Instead, it comes off as a subtle clue to the actual human toll of his mission. And I think that’s just great.

Join the conversation in the comments below! What film should I review next? What’s your favorite action series? When will Ethan Hunt fight the evil Lord Xenu? Let me know!

One thought on “Is it Possible to Stay Fresh After Six Movies? Yes! – Mission: Impossible – Fallout”