If you’ve been to the movies at any point in the last two-plus weeks, odds are you were probably watching the new romantic comedy, Crazy Rich Asians, as it’s won the weekend box office twice in a row. The film is polished and ambitious, and has at 94% rating on Rotten Tomatoes as of this publish. So surely this must be one of the best movies of the year, right?

Much has been made about the fact that the film features a core cast of Asian actors, a feat not accomplished in American cinema since (most likely) The Joy Luck Club. But when I saw the numbers and read the headlines, I was wondering what else the film had going for it to garner such praise. Sadly, the answer is “not much.” It’s laudable to put non-whites in the spotlight, especially such strong actors as are seen in this film, but at the end of the day, the actual movie is a pretty standard issue romantic comedy. There’s nothing wrong with that, but it you’re going to make such ballyhoo about how great this movie is, then there has to be something other than the skin pigmentation of the cast to qualify such a claim.

Or maybe there doesn’t. I’m not really sure. In the four days since I’ve seen the film I’ve gone back and forth over whether this movie needed something extra to justify the praise. Is it enough to say, “Hey, guess what, Asians can make perfectly adequate, forgettable movies, too!” or is it a microaggression to presume that they should elevate the discussion and separate themselves from the pack? It’s a conversation above my pay grade (as I literally make no money from this), but it’s a discussion worth having. On the whole, the movie is perfectly fine, but I am left with this nagging feeling that there should have been more to this than just the racial element, which I concede may say more about me and my own biases than anything else.

Based on a novel by Kevin Kwan and directed by Jon M. Chu (best known for dance films like Step Up 2: The Streets), Crazy Rich Asians lives up to its name right from the first scene, as matriarch Eleanor Young (Michelle Yeoh) buys a posh British hotel outright after the concierge treats her in a racist manner in the 1980s. The manic look on her face as she flaunts her wealth to give some bigoted white people their comeuppance sets the tone immediately.

Fast forward to the modern day where we meet another strong woman not to be trifled with, Rachel Chu (Constance Wu of Fresh Off the Boat), an economics professor at NYU who is introduced by embarrassing a card shark as a demonstration of Game Theory. She is dating Nick Young (BBC presenter Henry Golding), son of Eleanor and heir to the family fortune (they have so much real estate assets they’re treated as royalty), though Rachel doesn’t know that at first. Nick invites Rachel to Singapore with him to attend his best friend’s wedding (where he’s serving as Best Man), and to meet his family.

The rest of the film is pretty formulaic. There are some mild culture clashes, as the Young family resents Rachel for being “Chinese-American” instead of just Chinese. Rachel is forced to butt heads with Eleanor because of the standard “disapproving mother” trope seen in rom-coms throughout the decades. There are catty women trying to sabotage Rachel to get a shot with Nick.

Similarly, each of Nick’s friends and relatives has a one-dimensional character type. Cousin Astrid (Gemma Chan of Jack Ryan: Shadow Recruit and the upcoming Captain Marvel) is magnanimous and caring, though she has a habit of hiding her lavish purchases from her “commoner” husband Michael (Pierre Png). There’s Remy Hii as Alistair, a big shot movie producer who finances films so he can put his model girlfriend in them. Another cousin, Eddie (Ronny Chieng of The Daily Show) flaunts his riches and lives in a sham marriage for the sake of publicity. Nico Santos (Superstore) plays cousin Oliver (not Brady Bunch), the token sassy gay character. Everyone has their moments, but they’re all pigeonholed. 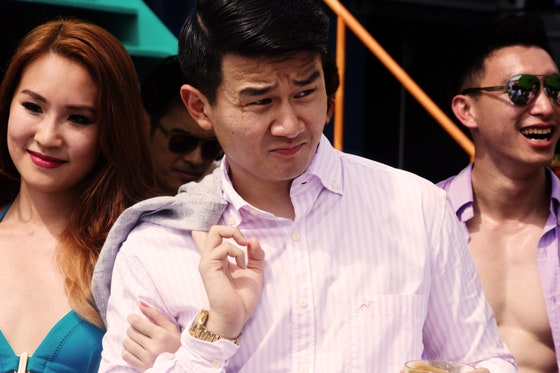 Whenever Rachel feels overwhelmed, she visits with her college friend Peik Lin (Nora Lum, who uses a rapper stage name that’s just a misspelling of a brand of bottled water that doesn’t pay me to mention them, so I’ll dub her “Uh-QUAFF-ena” because her stage name is so stupid that it literally pains me to dignify it by saying it), who just happens to live in Singapore, and whose family also happens to be filthy stinking rich. She tries her best to provide comic relief, but apart from a few one-liners during a dress montage, it all falls flat, mostly because in a movie that touts its level of Asian representation, her voice and mannerisms are all an attempt to come off as black as possible, and it’s just uncomfortable (especially as she’s the one to make the obligatory “yellow on the outside, white on the inside” joke). It also doesn’t help that her YouTube rap skills are put on display during the credits, and it sound’s like something that would be whoop-dy poop scooped out of Kanye’s septic tank. There are a few laughs from Peik Lin’s family, however, thanks in large part to the always funny Ken Jeong, playing her father.

There’s just this weird sort of one-note convenience to the cast outside of Rachel, Nick, and Eleanor (and while her performance is fine, it breaks my heart to see Michelle Yeoh, one of the most kickass women in cinema history, reduced to such a clichéd role). And while the film is presented beautifully, it doesn’t always work. For example, the plot of the film begins when an undercover reporter spots Rachel and Nick in a cafe. She surreptitiously snaps a selfie, then sends it through the interwebs until the information lands in Eleanor’s lap thousands of miles away, prompting her to call Nick and ask about a lady friend. Putting aside the notion that everyone who takes selfies in a movie should be put in a labor camp, it’s a fun and trippy sequence. But given that, how did Rachel not know about Nick’s family and fortune? She’s been dating him for a year. She clearly has social media, and she’s established as being smarter than the average bear in her introductory scene. If Nick’s mom can learn about her in five seconds, how could she not learn about him in a year? Peik Lin’s jaw drops upon learning who Nick is, but did Rachel really never tell her his last name, or send a picture? Doesn’t really hold up to the most basic scrutiny.

And of course, I have to be the asshole here and talk about the elephant in the room, which is class warfare. This film is sold as a major achievement for the Asian community, but really, most of the vignettes leading up to the wedding are just examples of some of the most disgusting attributes of a capitalist society. The bachelorette party is a weekend full of spa days and shopping sprees. At the bachelor party, a groomsman played by Jimmy O. Yang (Silicon Valley) launches fireworks with a bazooka on a freighter that he’s rented, the blowback of which severely injures an international beauty queen. The cheapest car seen is an Audi. Nick and Rachel sleep in the first class section of an airplane that looks like a small hotel room. And these people are just as dickish as any white person you’d see at a country club. Thanks to the majority of the cast speaking with English accents, the only difference is the skin tone. You could replace Ken Jeong with Donald Trump doing a slanty-eyed face and the flaunting of riches would have the same effect. It’s even worse when you consider that the one non-rich person in this film, Michael, is essentially the bad guy because he cheats on Astrid due to his feelings of inadequacy. Am I really supposed to be rooting for the 1% of the 1%? Fuck that.

All that said, this is still a good film, with plenty to like. Nico Santos is hilarious. Jon M. Chu creates and stages some beautiful set pieces. I fully admit I got choked up at the wedding, because the ceremony was one of the most unique, gorgeous setups I’ve ever seen. Constance Wu and Michelle Yeoh play off each other admirably. The soundtrack is littered with these endearing Cantonese (I think) covers of popular songs, though the last one, Coldplay’s “Yellow,” is a curious choice given the racial dynamic.

But more than anything else, what I really loved about this film is in one of the aspects where they departed from rom-com norms. Even with a threat of a bad ending (saved by a happy one that was hastily shot and added in at the last minute), you never once doubt the genuine nature of Rachel and Nick’s feelings for one another. Throughout the film, as they go off on their separate adventures and storylines, it is never once suggested that they aren’t 100% in love with each other. Some bitches try to sabotage Rachel. Nick is questioned about his commitments to his family versus Rachel. But there’s not one moment where you would reasonably think that maybe they’re not right for each other. It’s not an entirely new phenomenon, but it’s a welcome one nonetheless. The drama is all about the outside forces and interference, never internal ones. No matter how cheesy the film gets, or how disgustingly lavish the rich people behave, their love is pure, and that’s just fantastic.

I know I’ve shit on this more than I’ve praised it, but I mean it sincerely when I say this is a good film. Again, I fully admit that I may be holding it to too high of a standard given the marketing and the social weight of its grander import. Is it one of the best of the year? No. Is it even the best rom-com of the year? Still no. Is it worth paying money to see in the theatre? At this point I’d say no, because it’s already accomplished its goal of initial success, to the point that the sequel is already in the works (apparently Kwan’s book is the first in a trilogy). Now that we’re a few weeks into its run, I’d say hold off until it comes on DVD. It’ll be a great choice for a nice date night in.

Join the conversation in the comments below! What film should I review next? What’s your favorite rom-com? What marginalized minority should be the next to headline a film? Let me know!