Over the last few years, there have been some experimental takes on filmmaking that present the story through the lens of social media and first person perspectives, most famously the Unfriended series and Hardcore Henry. Those previous efforts have largely fallen flat, mostly because the gimmick seemed like little more than cheap pandering to millennials rather than as a new angle with which to present a compelling story.

Thankfully, we’ve finally got a breakthrough thanks to Searching, directed and co-written by Aneesh Chaganty. Presented exclusively through footage on smartphones and computer screens, Chaganty gives the audience a Hitchcockian thriller that keeps you guessing until the very end, and even when you can see a twist or red herring coming, you’re still locked in for every moment. The vast majority of this is due to the novel presentation style, as well as a career-best performance from John Cho, who incidentally gets bragging rights as the first Asian-American lead in a mainstream Hollywood suspense movie.

Cho stars as David Kim, a normal suburban dad in northern California. In an opening montage that could rival Up in terms of emotional devastation (and STILL showing a better love story than Twilight did in five movies), we see David’s courtship with his wife, Pam (Sarah Sohn), the birth and early years of daughter Margot (Michelle La), and eventually, Pam’s untimely passing, which sets the stage for the events that follow.

After a late night study session for her upcoming exams, Margot goes missing. After some cursory searching on his own, David turns to the police, and begins working with Detective Rosemary Vick (Debra Messing – also a career-best performance). Between the two of them, they piece together Margot’s whereabouts before her disappearance, with Vick doing some ground work involving fake IDs and mysterious bank transactions, and David following any lead he can by accessing Margot’s social media accounts on her computer (which she left behind when she disappeared).

What David discovers makes him increasingly distraught, in part because every lead hits a dead end, but also because he slowly learns that he’s lost touch with his daughter after Pam’s death. She’s been aloof, depressed, and only active socially out of pity from others. A man as confident as David has his entire world shaken not just by his daughter’s disappearance, but in the fact that he realizes he has no idea who she is as a person. 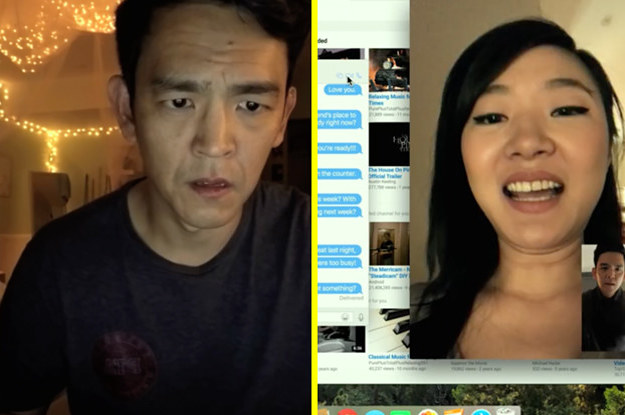 There are several great twists and turns as the story plays out, and little clues hidden in plain sight in just about every scene. It’s wildly imaginative and deliberate mystery writing at its best. Everyone’s a suspect, and everyone has a feature that makes them wholly relatable.

But obviously, what really makes the film stand out is the use of social and mass media, not just as a plot device, but as an indictment of our societal addiction to them. Normally I’d be highly critical of a film that uses a ton of product placement and social media stuff, as again, it’s usually just pandering to make a quick buck. But it speaks to Aneesh Chaganty’s skill and maturity as a writer and director that the use here is for a sense of verisimilitude, not avarice.

For example, this film was released by Sony, which has a very unfortunate habit of shoehorning their products into just about every movie they put out, even when it’s utterly illogical and unrealistic. Case in point, the awful Slender Man features teenagers using Sony smartphones exclusively, which makes about as much sense as me shitting pennies.

In this film, however, there is no such grandstanding for brand integration. The film begins on a computer using Windows XP, before graduating to Macbooks. Characters use both iPhones and Android smartphones. Facetime is used just as much as Skype. YouTube shares space with local TV web feeds and national news. Facebook, Instagram, they all get a portion of the attention, rather than an exclusive chunk, which makes a lot more sense and is a lot more commonplace in today’s society than the illusion of homogeneous use of a single platform. Some of the most realistic bits in the entire film come from the mouse cursor constantly rearranging windows on David’s computer as he flips between calls, emails, video chats, whatever. His mind is as scattered as his desktop, something we’ve all been through.

And again, the beauty of the film’s use of mass media works because it not only gives us a familiar framing device, but it also calls out the negative usage that it has spawned over the years. People initially sympathetic to David waste little time in accusing him of killing his own daughter with no proof. Classmates who privately tell David that they barely knew Margot go on TV to cry crocodile tears and call her their best friend and send the requisite “thoughts and prayers.” Honestly, the only bit that wasn’t entirely convincing to me was one potential clue discovered on TMZ’s website, which struck me as odd, as TMZ mostly concerns itself with celebrity affairs rather than domestic disappearances. Full disclosure, I briefly worked at TMZ a couple years ago, so I have some inside perspective on this, but I also understand how licensing and clearance of intellectual property works. TMZ signed off on it, so I can’t be too fussed if it’s not entirely believable.

Finally, I can’t end this review without going a little deeper into the lead performances. John Cho has been a favorite of mine since American Pie, where he helped usher the term “MILF” into the cultural lexicon. It may surprise you to know that he was 27 years old (playing a 17-year-old) when that film came out. He’s 46 now, and his entire career to this point has been spent playing younger, more immature characters. Between American Pie, Harold & Kumar, and the rebooted Star Trek films, he’s always had to act younger. For once he gets the chance to truly shine with a character more his age, and he just knocks it right out of the park. We feel his anxiety, his doubt, his fear, and his heartbreak with every scene, even when we’re just seeing the upper third of his body through a Facetime screen. A lot of that is because we truly believe him as a father, rather than as a teenager or young professional. It’s remarkable.

The same goes for Debra Messing. She finally gets a chance to branch out as a dramatic actress, and she does a wonderful job. Most know her comedic exploits, but it’s truly incredible how empathetic Detective Vick is, how layered Messing’s performance is. She has to be a trusted guardian, the giver of hope, and the dasher of dreams with every lost lead. The rapport she forms with David seems completely genuine and organic, informed by years of service, both in uniform as a police officer, and as a mother to a special needs child. It all comes together beautifully.

I’ll fully admit I was hesitant to see this film. I’ve rolled my eyes a number of times at the social media movie shtick. But seriously, this film not only works, it’s tremendous. The story is compelling, the characters believable thanks to top-level performances, and the framing device makes full use of its potential because Aneesh Chaganty knows how to inspire and condemn with just a swipe and a click.

Join the conversation in the comments below! What film should I review next? Which performance did you like best? Did you illegally stream the film on your own computer, bringing the technological themes full circle? Let me know! (or don’t – wouldn’t want you confessing to crimes on my account)