I think it can be generally agreed that Robert Redford is one of the greatest film actors of all time. Among his vast catalog is an array of classics, and you could have a wonderful debate as to the best of the bunch. Is it Jeremiah Johnson? All the President’s Men? The Sting? A Bridge Too Far?

For me, it’s always been Butch Cassidy and the Sundance Kid. It’s one of my all-time favorites, and one of the few movies out there that can truly romanticize an outlaw without coming off as trite. Also, obviously, the rapport between Redford and the late Paul Newman was on full display, and for me, never better illustrated.

Now, at age 82 (exactly 46 older than yours truly – I have a cool list of celebs on my birthday), Redford has announced his intent to retire from acting, with his latest film, The Old Man & The Gun serving as an absolutely note perfect swan song. Like young Sundance so many years ago, Redford and director David Lowery excel at bringing out the best of the worst members of society, giving us one more look at a crook we can all root for. It’s a loving acknowledgement of Redford’s career, and a wonderfully understated coda that still adds to the actor’s mystique.

Redford stars as real-life bank robber Forrest Tucker, a career criminal and serial prison escapee. The story follows a string of robberies he and his cohorts (Danny Glover and the immortal Tom Waits) commit around the American mid- and south-west in the early 1980s. Tucker’s modus operandi is to case the bank to plan his heist, then simply walk in, clad in a nice suit and hat (and occasionally a fake mustache). He politely asks to open an account or make a withdrawal, then flashes his gun. Upon doing so, he talks the teller or manager through the physical transfer of money, then leaves inconspicuously. Those he burgles then report the incident to police, noting that Tucker was “very nice” and “quite the gentleman.” Police and attorneys report that even though Tucker has a gun, he’s never actually fired it, and they wouldn’t be surprised if it wasn’t even loaded.

After one such robbery outside of Dallas, Tucker notices a broken down truck on the freeway, and pulls over to assist, mostly to allow pursuing police to pass him by. There he meets Jewel, a middle-aged widow and horse farm owner played by Sissy Spacek. Tucker is instantly smitten, and he charms Jewel into a relationship. The chemistry between these two leads is amazing, especially considering that this may be the only time they’ve ever collaborated on a film. According to Lowery, they had hardly even met each other before this project. 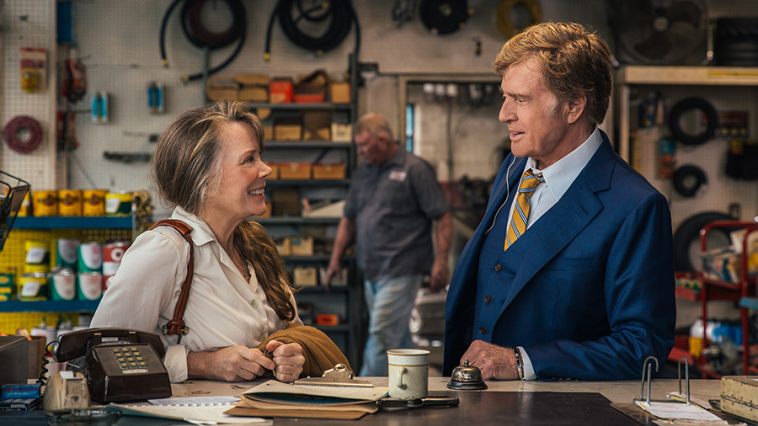 Tailing Tucker is Detective John Hunt, played by Casey Affleck affecting a grizzled drawl (the real John Hunt has a cameo late in the film as one of Tucker’s fellow prison inmates), assisted by John David Washington as Lieutenant Kelley. Affleck does a well enough job for his part in the cat-and-mouse game, balancing his desire for justice, family life, and one-upping Tucker in the pithy charm department. Washington I’m hoping doesn’t get typecast as a cop, as this is his second police role so far this year (and the review for his third is coming soon).

Now, let’s be honest, while the supporting cast is fantastic and do their jobs admirably, this is all about Redford. The entire film relies on his performance to succeed, and Redford does not disappoint. It’s not by accident that I referenced Sundance in the headline for this post. Watching Redford’s subdued, charming performance as a rogue in his golden years (Tucker allegedly never actually spent the money he stole – it was more about the thrill of the act of robbery) is to see the Sundance Kid back in all his glory, but also weary with age and a bit wiser for his experiences. There’s a scene where Tucker asks Jewel if she’s ever taken a real vacation, to someplace like Florida, or Hawaii, and in my head all I could think was, “someplace like Bolivia, maybe?” The role is filled to the brim with nostalgia, but Redford seems to recognize the connection and goes the extra mile to add more dimensions to the character, just enough to make him unique.

A lot of this also has to do with writer and director David Lowery, previously known for smaller films like A Ghost Story and Ain’t Them Bodies Saints, as well as the 2016 remake of Pete’s Dragon (also featuring Redford). Lowery adds a few creative tangents to the story to give a more full account of Tucker’s life. For instance, John Hunt receives a tip and goes to interview Tucker’s daughter, Dorothy, who he has never met. Apart from learning Tucker’s real name, there is nothing relevant to Hunt’s investigation into Tucker in this scene, and that information could have easily been delivered as exposition elsewhere. But Lowery made an interesting creative decision. Dorothy, played by Elizabeth Moss, is included to let the audience know that Tucker couldn’t charm everybody. Despite his wit and bedroom eyes, Tucker was a criminal. His actions did cause damage to banks and businesses, as well as giving the employees a traumatic experience, even if it wasn’t physically violent.

There are two other really fun creative choices made by Lowery, which I learned at a Q&A session with him (moderated by Deadline film critic Pete Hammond – no relation; our names are spelled differently) after the film ended. First, the movie was shot on 35mm film, which I absolutely loved, as it gives off a grainy, 1980s look. There aren’t too many movies shot on actual film anymore, so it’s always refreshing to see auteurs who know their stuff and still have reverence for their film roots.

Second, there’s a really fun montage of all the times Tucker escaped from prison and other disciplinary institutions. Noticeable among the timeline of scenes is a clip from The Chase, literally showing a younger Redford. But it gets better. For the car chase scenes, Redford was reunited with his stunt double from Butch Cassidy and the Sundance Kid. Apparently they’ve been friends since childhood. That would be cool enough on its own, but not only does Redford’s old double work the film, but that double’s son and grandson portray younger versions of Redford/Tucker in that montage. Nerdgasm!

Is this the end for Robert Redford? Perhaps not. Like I said when Daniel Day-Lewis announced his retirement with Phantom Thread last year, I’ll believe it when I see the obituary. But I’m more inclined to buy it here, given Redford’s age and his desire to focus on the Sundance Institute. But if this is the end, it is a great end, and more importantly, a fitting end. There’s a wonderful scene late in the film where Redford as Tucker rides a horse for the first time, gently trotting up a hill on Jewel’s farm as the police sirens approach, and he just looks out on the horizon with a contented smile. If this is Redford’s last ride, it’s the perfect image to sum up his career. In his younger days, as Sundance, he would have rode out, confronted his pursuers, and gone out in a blaze of glory. Here, he can simply smile about a job well done.

Join the conversation in the comments below! What film should I review next? What’s your favorite Robert Redford movie? What would you do with the money if you robbed a bank? Let me know!