Reinaldo Marcus Green is a young director and producer, mostly known for shorts and some TV work. His latest, Monsters and Men, marks his feature-length debut, and was screened in competition at the Sundance Film Festival before being commercially released this week. Featuring a cast of mostly unknowns, Green has put out an amazing first feature, quite possibly the most artistic film of the year. In all honesty, the only glaring flaw is the title, which can get easily confused with Of Monsters and Men, the Icelandic alternative rock band, also quite good.

It should also be noted that there likely won’t be another film this year that comes closer to the audience calling bullshit when they see the “This is a work of fiction. Any similarity to persons living or dead is coincidental” disclaimer. At least two thirds of this film have a direct correlation to current events, and the other third has, at minimum, real world resonance.

A sort of Rashomon for the Black Lives Matter movement, the film exists more as three connected short films than one overall narrative, with all the action focused on the aftermath of a police shooting. Each arc features a different lead actor with a different perspective on life in New York City (specifically the Bedford-Stuyvesant – Bed-Stuy for short – neighborhood of Brooklyn) as it relates to institutional racism and the role of police in society. Also, in all three scenarios, the lead character is sort of caught in between two diametrically opposed viewpoints, and Green does fantastic work illustrating that there are no easy answers.

The first section features a young man named Manny Ortega, played by Broadway actor Anthony Ramos (original cast of Hamilton) in what should be a star-making role. Manny lives with his mother, along with his girlfriend and infant daughter, with another child on the way. He’s a reformed hustler looking to go legit as an office security guard, though he still hangs out with the somewhat dubious characters of his neighborhood, including a younger kid who sells stolen goods and a big man named Darius Larson (Samel Edwards), also called “Big D,” who hangs out by the corner deli selling “loosies” (loose cigarettes). 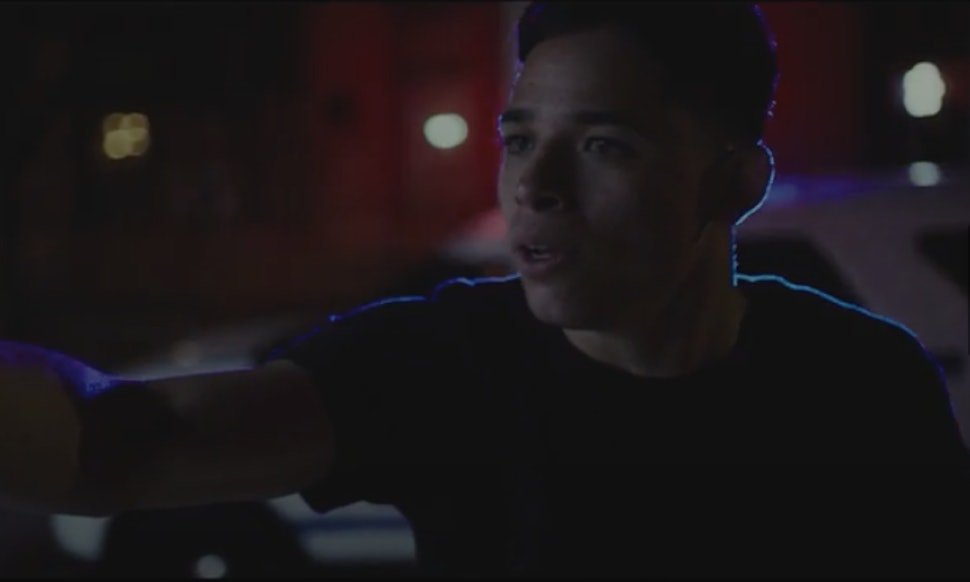 One night, while shooting dice by the deli, police arrive, and the game breaks up. Manny walks to the corner to see six cops harassing Darius, so he decides to film the action on his phone. As he protests, Darius is shot and killed. After Larson’s funeral, his character is immediately assassinated in the press, with one officer claiming Larson went for his gun, and other white officers approaching Manny to urge him not to get involved and share the video on his phone. The cops stake out his project house all hours of the day to intimidate him, and mere days after Manny posts the video online, he’s arrested on a trumped up charge.

We never see the full tape ourselves, nor do we see Larson get shot. All of that is left up to the imagination, and it’s the first prime example of the endless dilemma of street life. Do you tell the truth, consequences be damned, or do you take heed to veiled warnings and keep your proverbial nose clean, knowing that likely nothing will change if you come forward?

The middle section features the closest thing to a star in this film, John David Washington, as police officer Dennis Williams. This is Son of Denzel’s third film this year, and all three times he’s played a cop. As I mentioned in the previous review, I sincerely hope this doesn’t get him typecast, because he’s done wonderful, nuanced work all three times, but I would like to see him branch out in future roles.

Here, the character is torn between two competing loyalties; to his values and to his shield. The film opens with him singing along to Al Green in an unmarked car and getting pulled over by another cop, only being released when he flashes his badge. As he notes to his white partner, this happens to him a dozen or so times a year, getting pulled over for, essentially, Driving While Black.

With the world reacting and protesting yet another shooting of an unarmed black man by a white policeman, Williams finds himself caught in the figurative crossfire. On the one hand, he believes the officer who pulled the trigger should be punished, and is even questioned by Internal Affairs, who hope to make an example of the shooter. On the other, he lives in daily fear for his life and the safety of his family, and won’t simply kowtow to a boiler plate argument about police brutality, even if it comes from other black friends.

When two other officers are killed in the line of duty, the contrast between the value of life is on full display. When Larson was killed, he had a bare bones funeral in a small chapel. He’s buried in a military uniform, a hint that he deserved higher honors than he got. Meanwhile, two cops are killed – one white, one Hispanic – and the honor procession is like a somber parade through the neighborhood. All the while, here’s Officer Williams, in the impossible position of wondering how to act and who to trust. The other cops want him to stand behind his colleague no matter what he did, even more so after the others are killed. He also can’t deny what his own eyes see on the video, despite not being at the scene when the shooting went down.

Finally, Act Three focuses on high schooler Zyrick (Kevin Harrison, Jr. of Mudbound), a baseball phenom with prospects of going pro right after graduation. He lives with his father, and is often a witness to shady police dealings, including being stopped and frisked on his way home from practice (the racist cops assume he plays basketball).

Inspired both by his hormones and a desire to right the wrongs he sees every day, he approaches a female classmate to learn how he can volunteer and become an active protester. He spends time getting to know her on a personal level, but also becomes more engaged in social issues, to the point that he shirks off a party thrown by his family to go march downtown, an act that nearly gets him arrested when the police declare the protest “unlawful” and deploy the riot gear. On the eve of his showcase for professional scouts, one where he’s already been told by an agent looking to sign him that he has to “show character,” he’s forced to reconcile his career prospects with his need to solve the social injustices going on around him daily.

As I said, this all has real world connections. Manny’s story and the death of Darius Larson are a direct reference to the case of Eric Garner, an oversized black man who was choked to death by NYPD officers for selling “loosies,” and the only person who saw the inside of a jail cell was the bystander who filmed the incident. Zyrick’s story arc turns him into Colin Kaepernick, complete with him kneeling on the field in the final shot. Officer Williams represents the dichotomy of “good” apples vs. “bad,” and the lengths to which the police department will go to protect their own, a symptom of a larger illness we’ve seen all too often over the last few years.

What makes the film work is the artistic presentation. The performances are spectacular, but Green has quite a few cinematic tricks up his sleeve, the most obvious of which is to switch story lines by having the characters literally making eye contact with one another through some form of obfuscation, like a two-way mirror. The film is shot in muted color tones, and there’s very little ambient sound apart from what we are meant to hear, particularly approaching sirens.

Structurally, the film is sound, and the plotting well paced, given that we’re essentially watching three one-act plays strung together. More importantly, the fates of all involved are left ambiguous, every story unresolved. It’s a proper decision, because this issue is so large as to make any real definitive “ending” seem perfunctory. The ripples are far-reaching when such incidents occur, and even if it’s a sad ending, things can’t reasonably be wrapped up so neatly.

This is a powerful first outing for Reinaldo Marcus Green, one that shows amazing potential and artistic temperament. Hopefully Ramos and Harrison will be able to use this as a launching pad for a lot more great work to come. And as for Mr. Washington, it’s pretty clear the apple didn’t fall far from the tree as far as acting talent. I’m excited to see what all of these gentlemen have in them going forward.

Join the conversation in the comments below! What film should I review next? What kind of arty films do you like? Have you ever joined a public protest, and for what cause? Let me know!