The original Halloween, which debuted 40 years ago, is one of the greatest horror movies of all time, and it’s certainly the best of the slasher subgenre. Director John Carpenter created a seminal character and film using the barest of elements, including a minimalist keyboard theme that still creeps me out to this day, and of course, a spray-painted Captain Kirk rubber mask.

Laurie Strode, played by Jamie Lee Curtis in her big screen debut, is also one of the great feminist heroines of cinematic history. Perceived as helpless and initially presented as nothing more than another Scream Queen, Laurie became a fully self-actualized character, turning the tables on a killer much stronger than her physically by exploiting his minor weaknesses, and not only surviving the murderfest but asserting herself as a dominant force in her own right.

And of course, there’s Michael Myers, a quintessential movie monster. An embodiment of pure evil, the silent killer is only hinted at in the early scenes (including the absolutely masterful long cut opening where the six-year-old Myers kills his sister), choosing to observe and stalk his eventual victims for reasons that are never explained, nor did they need to be. He was just creepy, which was enough to build suspense, and then he was merciless, eviscerating his dispatches one by one, the mask making sure we all saw him as an emotionless psychopath, no hint of humanity. Even when you take away his superhuman strength and his nigh-immortality, that mask was enough to let you know there was nothing human behind it.

The original has its flaws, same as any other movie (How and when did Michael learn to drive if he’d been institutionalized since age six?), but the whole was much larger than the sum of its parts, coming together in the best way to deliver legitimate scares. And then, of course, as happens way too often, a slew of ill-advised sequels and reboots basically robbed the original of its mystique, and the whole thing degenerated into self-parody. I mean, for fuck’s sake, 20 years ago Jamie Lee Curtis reprised her role as Laurie in H20 and chopped Michael’s head off, only for another sequel to get jammed down our throats to retcon that ending and have Michael fight Busta Rhymes. Oh how far we’ve fallen. Even Rob Zombie, a brilliant horror filmmaker, just made a couple of flops when he got to remake the series a few years ago.

Well now, we have another go at it, and the effort was seemingly there to do the original film justice. Curtis is back as Laurie, Nick Castle, the original Michael, re-dons the mask, and John Carpenter himself signed on as an Executive Producer, Composer, and Consultant, for a script directed by David Gordon Green (Pineapple Express) and co-written by Green, Jeff Fradley, and Kenny Powers himself, Danny McBride. You can tell throughout the film that there was an earnest desire to “get it right,” to the point that this film effectively retcons the entire series after the original, standing as a direct sequel 40 years later.

Oddly enough, if this had been a stand-alone film, rather than an entry in a well-established franchise, I think it might have been better, might have carried more weight. Instead, it’s certainly the best Halloween sequel, but that’s basically by default. There are moments that scratch the surface of new ground, but in the end the film suffers from the same tropes as any number of B-slasher flicks that have come in the last four decades, and as usual, the money’s really all that matters, as the near-$200 million its made so far has already seen another sequel greenlit. Like Michael himself, we just can’t kill it for good, can we?

Anyway, to the actual film. Casting off all other sequels and remakes/reboots, we begin this film back in Haddonfield, Illinois, because for some reason, when all of your friends are murdered, you don’t move away (I know they did that in H20, but I meant in a way that didn’t make you roll your eyes). Laurie is now a doomsday prepper, specifically the doom that is Michael Myers, her house laden with weapons, fences, and traps in the woods, all set up in anticipation of Michael’s return. Her daughter Karen (Judy Greer) was taken away as a teenager, and resents Laurie’s paranoid upbringing. Her daughter Allyson (Andi Matichak – listed as her introduction but she’s had small roles in minor films before now, as well as a good amount of TV work) is a typical high school student with cannon fodder friends and a hot boyfriend who of course cheats on her, as well as a chubby male friend who deludes himself into thinking he’s got a chance with her.

Just in that paragraph we start to see the thread come unraveled. All of her friends are basically introduced as a line-up of Michael’s eventual victims (though there is one surprise survival in that list that I won’t reveal, mostly because it’s not relevant). There’s no dimension to any of them. From the moment you meet them, you’re just wondering how they’re going to die rather than if. Also, as much as I love Judy Greer, she’s just there to be a vocal antagonist, as Michael remains silent. Thirdly, Allyson refers to Laurie as “Grandmother,” which just seems weird to me. I mean, when I mention my late grandmother, I phrase it just like that, as “my grandmother,” using a possessive pronoun to go with the formal title. But I never actually called her, “Grandmother.” It was always, “Grandma,” or “Gram.” Most people I know use some combination of those along with “Grammy” or “Nana.” I’ve literally never heard someone address their grandmother as “Grandmother.” It was just weirdly offputting. 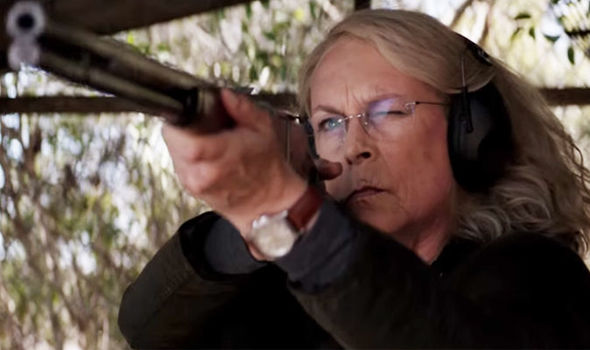 Before we see any of these people, though, we get to meet Dr. Ranbir Sartain (Haluk Bilginer, best known for his role in Buffalo Soldiers, or if you’re in the UK, he was on Eastenders for a good period of time), who has taken over for the late Dr. Loomis (Donald Pleasance, who died in 1995). He is accompanied by two British true crime podcasters, played by Jefferson Hall and Rhian Rees, who seek to reunite Michael with Laurie in an attempt to draw out Michael’s predatory tendencies before his inevitable escape and rampage.

The opening scene serves two purposes. One, it sets up three more victims. But more importantly, we get one of those surface scratches at something more. In a truly cool scene, the podcasters meet with Michael in the hospital’s yard, where he’s chained to a post, standing with his back to them. Dr. Sartain informs them that Michael isn’t mute. He simply chooses not to speak. That’s interesting information that actually adds to the character’s profile. And even if it was established before (I can’t recall, to be honest), since we’re using this film to reset the entire series post-original, it’s a great rule to set out. Further, one of the podcasters confronts Michael with his trademark mask.

And this is where believability falls, because the original mask was partially torn off by Laurie in the first film, so it can’t be the same mask, even though it looks a bit ragged. Further, if the aim was to get a reaction out of Michael, then why not face him with it? The mask is pulled out from behind, as if to coax him to turn around. Why not surround him, look him in the eye, and show him the mask, instead of just yell and cut to other patients wigging out before smash-cutting to the opening credits? I guess they were trying to maintain the mystery of never truly seeing Michael’s face, but you can always shoot it so we don’t see his face. There’s no point in forcing everyone else to not see him, especially when future victims seemingly recognize him outside of said mask. Like I said, the movie almost builds upon the mythos, but consistently stops just shy.

Apart from all that, there are several callbacks to the series, including the now buried sequels. Laurie being Michael’s sister (as was revealed in several sequels) is tossed off as a tabloid rumor in a line of dialogue. Allyson’s boyfriend is the son of Lonnie Elam, one of the boys who bullied little Tommy in the original. Frank Hawkins, the cop who arrested Michael after the first movie, returns (with Will Patton playing the role) to team up with Laurie and attempt to take Michael down once and for all. There are even callbacks to previous shots in the original, with Allyson sitting in English class hearing about “fate” while staring out the window and seeing Laurie, echoing an iconic shot from the first film where Laurie herself learned about fate and saw Michael out the window.

But honestly, no matter the intent and the loving treatment the film was given, it is still a slasher film, so how are the kills? There are a couple of really good, gory ones over the course of the film, but most of them are off screen or implied through stabbing motions rather than actual splatter effects. This echoes the original to a certain extent, but unlike the original, there are a lot more targeted killings of random people. In the first film, there are only one or two random victims, and they’re casualties of Michael’s journey from the asylum to Haddonfield. Here, he literally just walks into random people’s houses on Halloween night and shoves a butcher’s knife through their throats. There’s no point to it, and no shock value because we know who Michael is.

And again, even some of the established characters don’t get that elaborate of a death to justify us knowing about them in the first place. One of the deaths (think jack-o-lantern) makes so little practical sense it makes the audience lose any suspension of disbelief, because why would Michael go to all that trouble just to shock the next person he’s about to kill? Part of the film, really what drives Dr. Sartain’s entire character, is trying to figure out Michael’s bloodlust and murderous motivations. Honestly, sometimes I just wonder if he’s ticked that he never got to participate in arts & crafts at the hospital.

I think the best way to characterize this film is as a missed opportunity. There’s clearly affection for the source material, and you definitely feel that the filmmakers wanted to do right by the franchise and by the character. And to be fair, there are some solid moments, some well orchestrated kills, and Jamie Lee Curtis is as great as ever (side note to Fox News: fuck you again for your stupid bullshit calling her a hypocrite because her character uses a gun while the actress is anti-gun; it’s not real you idiots!).

But sadly, I think this was a case of getting too close to the material and trying too hard to make something great, when all we needed was adequate. The movie’s entertaining enough, but given the lengths they went to, hoping to add to the mystique of Michael Myers, it not only fell short, but in some ways it backfired, leaving one of the scariest movie monsters looking about as scary as any random Mike Myers character.

Join the conversation in the comments below! What film should I review next? What’s your favorite scary movie? Did you just read that last line in a Ghostface voice? Let me know!