I’ll fully admit that I was a bit biased going into the new Queen/Freddie Mercury biopic, Bohemian Rhapsody, as I’ve been a fan of Queen my entire life. While they may not be the greatest band of all time, they are arguably the most artistic, bending genre and convention to their collective whim, and coming up with some of the most experimental, soulful music ever pressed to wax. So yeah, I was inclined to be a bit more forgiving of any flaws the film might have, because in my eyes, they’d truly have to fuck it up in order for this to be “bad.”

Sadly, that’s not what a lot of high-level critics were looking at when they judged the film, which currently sits at 60% on Rotten Tomatoes. Most of the negative reviews I’ve read fall into one of two categories. Either a) the film isn’t bombastic enough to live up to Freddie’s persona, or b) it was partially directed by Bryan Singer (who was fired for cause midway through production but retains the Director’s credit), who is facing several sexual assault allegations, so anything and everything associated with him must be quickly shuffled out of the public consciousness, which is a bullshit argument. A lot of these same people were falling over themselves to laud Roman Polanski winning an Oscar 15 years ago, so I don’t buy it.

Whichever way the snide remarks lean, they all miss the point, which is that Queen’s music was meant to be a celebration, an unlikely combination of misfits making music for misfits that could still bring stadiums down. It was about thrusting the outsiders into the mainstream, and this movie hones in perfectly on that note. Yes, some of the dialogue is trite, but even at its worst, this would still be the best episode of VH1’s Behind the Music ever made. And when the film is at its best, it absolutely shines, and on more than one occasion got me a bit misty-eyed.

As the film is likely to be marketed passionately for the Oscars (and Golden Globes, I suppose), I’ll continue doing what I’ve done a couple times before, and rate the potential categories in which this film could compete. There aren’t that many this time, but the few where it does compete, it’s got solid chops.

Best Actor: Rami Malek (Mr. Robot) does Freddie Mercury more justice than I even think the filmmakers intended. He is rock god bravado personified, and while he’s lip-syncing all of the music (which Jamie Foxx did in Ray, and he still got an Oscar, so I won’t knock it here), he’s got Freddie’s mannerisms down pat. There’s a lot of conflating of real-life events for the sake of the narrative, which can seem like we’re not getting the full fabulous story of Freddie’s life, but it’s also amazing how much we’re allowed to see, including the frank – and almost graphic – depictions of his sex life. Malek plays it all to the absolute hilt, and were Freddie still alive, I think he’d approve, and Brian May has already given his stamp of approval to the performance. This is most assuredly worthy of a nomination. 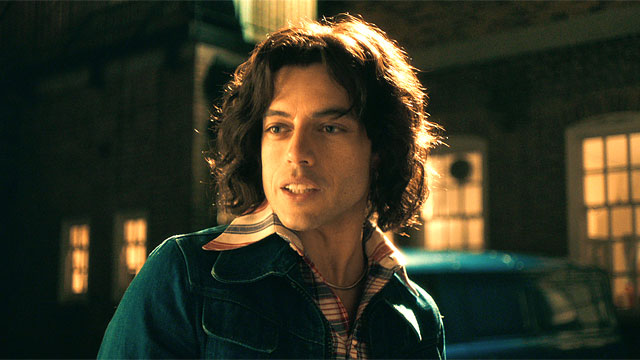 Makeup & Hairstyling: It goes without saying, but part of the convincing presentation is the look of Malek as Mercury. My God it is uncanny. From the extra teeth, to the hair, to the mustache, chest hair, and muscles, it all looks like Freddie risen from the dead. Malek’s wide eyes are the only distinguishing feature that would convince you that it’s not Mercury himself on screen. Further, there’s spectacular hair work done on the supporting cast, including Gwilym Lee (The Tourist) as a dead ringer for Brian May, Ben Hardy (X-Men Apocalypse) as drummer Roger Taylor, and Joseph Mazzello (little kid Tim from Jurassic Park) as bassist Roger Deacon. Similarly, you have Aidan Gillen (Littlefinger from Game of Thrones) properly 70s-iphied as the band’s manager John Reid, and EMI executive Ray Foster, played by Mike Myers under an orange Bob Ross fro and beard. Myers is particularly fun, as he gets a wink to the audience as Foster objects to “teenagers headbanging” to the song, “Bohemian Rhapsody,” refusing to release it as a single, a meta reference to Myers as Wayne Campbell reviving the song’s popularity in Wayne’s World after Freddie’s death. Again, some critics consider that little Easter Egg a bug, I call it a feature. All of these players are given just the most immaculate hair and makeup work, worthy of recognition.

I think there are outside shots for consideration in Costume Design and Production Design as well, but not enough to warrant a full breakdown. The sets are really well-constructed, particularly the recording studios and Mercury’s house, which has bedrooms for all his cats (side note: It’s a wonderfully true character beat to bring up Mercury’s love of cats, and to give them extended reaction shots whenever Freddie does or says something odd; it’s a fun bit of tongue-in-cheek humor that I really appreciate even if a lot of critics didn’t), as well as the utterly triumphant recreation of Queen’s performance at Live Aid in 1985 as the climactic set piece of the film. Also, given Mercury’s flamboyant tendencies, including long before his sexual orientation became front-page news, there are some wonderful costume choices for Malek throughout the film. I doubt it’ll get too much attention, one because it’s just for the one character, and two because the category tends to favor period pieces, but it’s still worth acknowledging the achievement.

The absolute best part of the film is the way we get to see the creative juices flow for the entire group. While Mercury is of course the lodestar, every member of the band has their moment in the sun, and it’s an absolute joy to watch them develop some of the band’s greatest (and not-so-greatest) works, from the bass riff of “Another One Bites the Dust,” to Brian May coming up with the stomp-stomp-clap audience participation of “We Will Rock You,” to the genre-bending experimentation of the film’s titular inspiration, to the running gag that is “I’m in Love with my Car.”

What shines through in all of this is that Queen was the happiest of musical accidents. The four men are very different, with different styles, different tastes, and different sets of skills, who all came together to make magic. One of the better bits – and honestly one of the few subtle ones – is that despite Mercury’s stage presence, everyone in the band features during the performances. When it’s Brian May’s solo, the camera moves to him. When Deacon puts the bass riff on, he takes center. When Roger Taylor performs a drum solo that could give Neil Peart a run for his money, you’d best believe he gets the full attention he deserves. As Freddie himself notes at one of the band’s more notorious press conferences, he’s not the leader of Queen, he’s the lead singer. Everyone plays his part, and everyone gets the proper credit for their contributions, and I’m very glad the filmmakers saw fit to make sure we got to see that, even if it wasn’t slap-you-across-the-face obvious. They were the epitome of a dysfunctional musical family, and the film gets that idea across with ease.

To be sure, there are flaws in this film, but as I’ve said, I’m more than willing to forgive a few tiny mistakes in favor of the larger, beautiful experience. Yes, some of the dialogue is silly. Yes, there are historical inaccuracies and timeline jumps. Yes, the film could have been even more graphic in its depiction of Freddie’s tumultuous love life. But honestly, I don’t care. Queen’s music was for us, for all of us who felt like we couldn’t belong, for all of us who don’t fit into a neat little box. Without Queen, there’s no Lady Gaga, there’s no 30 Seconds to Mars, there’s likely no Nirvana or Foo Fighters, or any host of other great acts out right now. They paved so many musical paths that in the end, it doesn’t matter if the plot follows the rise-fall-rise formula of most music biopics, or that the timing of Freddie’s AIDS diagnosis tracks so well with news reports about the evolution of the disease.

It doesn’t matter. What matters is that Freddie Mercury was a singular existence. What matters is that Queen is a singular band in music history. What matters is that they brought down the house wherever they went because they played for us. And that’s why it got a standing ovation in the movie theatre when I saw it this weekend. Rami Malek deserves a serious look for Best Actor, and the combination of all the great elements of Queen rendered through a cinematic lens works so well as to make this one of the best movies of the year as far as I’m concerned. But again, I’m biased.

Join the conversation in the comments below! What film should I review next? What’s your favorite Queen song? What if Freddie Mercury was one of the Spiders from Mars? Wouldn’t that be trippy? Let me know!