Three years ago, Polish director Pawel Pawlikowski won the Oscar for Foreign Language for his film, Ida, about a Catholic nun who wants to experience sexual relations before officially taking her vows, and who learns from her only living relative that her parents were actually Jewish. In keeping with the mid-20th century European aesthetic, the film was shot in black and white in a 4:3 box ratio. To be honest, I found the film boring, and I fell asleep watching it twice, but that’s neither here nor there. Sadly, it was the only Foreign Language nominee I got to see that year.

Now, Pawlikowski is back and has once again earned Poland’s place in the Oscar field with Cold War, loosely based on the history of his parents, and filmed the same way as Ida. However, from where I sit, this is a much richer and simpler story, anchored by two superb leading performances.

Beginning in 1949, the story tracks the 15-year on-and-off romance of Wiktor (Tomasz Kot) and Zuzanna, called “Zula” (Joanna Kulig). Wiktor is a composer recruiting rural Polish folk singers for a government-funded cultural choir. It is there that he meets Zula, a beautiful young singer who has a more polished, trained voice than the others. This makes Wiktor’s associates want to cut her from the program, as the government is looking for more rustic, natural voices, but Wiktor overrides their concerns and recruits her. Before long, she’s the featured singer of the group, taking center stage as the group performs. Emboldened by success, Wiktor and Zula begin their love affair.

Meanwhile, Poland is under the thumb of the Soviet Union, and with the initial draw of the choir, the local government is eager to retool the performances to appease their Russian overlords, starting with a tribute song to Joseph Stalin. Wiktor and his main partner Irena (Agata Kulesza) are hesitant to have their work co-opted so quickly. However, the third member of their administrative group, Lech Kaczmarek (Boris Szyc), sees an opportunity to elevate his position by kissing ass, so he commits to the changes and is quickly promoted within the local communist party.

Uncomfortable with his position, Wiktor asks Zula to defect with him to the west during their trip to Berlin. She initially agrees, but doesn’t show up at the agreed upon time, so Wiktor escapes alone. From that point on, the two are on separate paths, renewing their romance whenever they’re in the same city. Zula continues working with the choir until a marriage of convenience allows her to leave Poland legally, while Wiktor settles in Paris as a jazz pianist and band leader. The two meet intermittently, both weary and disgusted with their lives apart from one another, and Zula develops an alcohol problem, but when they’re together, they make beautiful music, figuratively and literally. 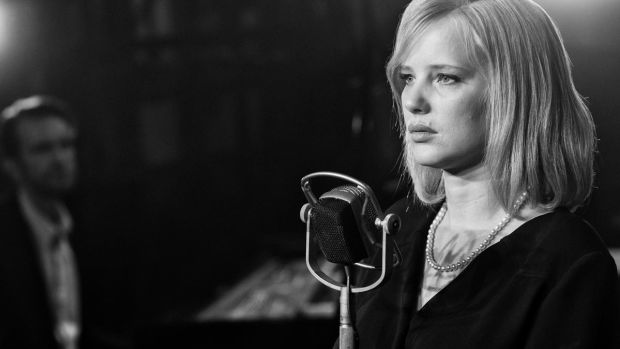 Pawlikowski makes the romance between Wiktor and Zula believable because of the star-crossed context of the literal Cold War going on in the background, but also because he trusts his leads to play off each other in the most natural way. Tomasz Kot plays Wiktor with quiet passion and conviction, occasionally lashing out in aggressive terms when pushed too far. Conversely, Joanna Kulig oozes pure sexuality as Zula, commanding attention with every deft hand motion or lyric she sings. What man wouldn’t swoon?

The other major creative choice is in the music itself. When Wiktor and Zula are together, Zula’s performances are lively, animated, and when she does jazz numbers, incredibly sultry. Pawlikowski employs a variety of extreme close-up shots, to the point where you can even see Zula’s tongue and tonsils moving when she’s committed to what she’s singing. When they’re under any kind of outside control, particularly from Kaczmarek, the performances become stilted and wooden. Zula hardly moves, Wiktor can barely conduct or play piano. Most importantly, Pawlikowski’s camera literally distances itself from the proceedings, opting for wide shots as Zula becomes just another number. While the black and white photography doesn’t necessarily resonate (I’m sure there’s some kind of “shades of grey” metaphor to be had, but whatever), the other camera choices are really well done.

It’s looking more and more like Foreign Language is going to be a stacked field next year, so Pawlikowski’s going to have some tough competition to bring home the Oscar for a second time. However, this is the type of film that could nab some gold. It’s emotional, tragic, and a romance on a higher level than most similar fare. Add in some top level performances and some really inspired camera work, and the contest is well and truly joined.

Join the conversation in the comments below! What film should I review next? Do you enjoy black and white films? What is your favorite Polish achievement, other than the submarine with the screen door? Let me know!