For those who don’t get the headline reference, a bit of film trivia. In 1948, a movie musical was released called Isn’t it Romantic? It’s fairly unremarkable, but it has one major bit of notoriety. In the 1980s, renowned film critic Leonard Maltin gave the film what is considered by the Guinness Book of World Records to be the shortest movie review in history. His review was simply – in response to the title question – “No.”

Decades later, we now have Isn’t it Romantic (no question mark at the end), which is in no way related to the 1948 film. After seeing it on a belated Valentine’s date night with my girlfriend, I’m pleased to say that this film isn’t romantic either. Instead, it’s a hilarious send-up of the rom-com genre that was sorely needed. In fact, I enjoyed the film so much that I ironically ruined the experience for my girlfriend, who expected me to hate it to the point of making snide commentary. In most circumstances she’d be right, but half the fun of the movie is that it beat me to the best jokes.

The opening scene sets the basic premise. A young Natalie (Rebel Wilson in adult form) watches Pretty Woman and dreams of her movie happy ending. Her mother disabuses her of that fantasy, noting that “girls like us,” (i.e. plain looking and/or overweight) don’t get to experience romance like Julia Roberts does. We then flash forward to the present day, where the Aussie Natalie is an architect in New York. Among the few flaws in the film is that a) Natalie’s mother, played by one of the greatest comic actresses of all time – Jennifer Saunders – is wasted in a single scene of pure exposition, b) we get no explanation as to how Natalie gets to America, and c) we have no basis for why she’s an architect of all careers. Those last two points are somewhat indirectly paid off later on, but I was upset – and I can’t believe I’m saying this – that I didn’t get more background on Rebel Wilson’s character.

At her office in the city, Natalie’s preparing for “the big presentation” for the construction of a new hotel for a wealthy client named Blake (Liam Hemsworth), who rudely dismisses her as an office assistant. Natalie’s co-worker and best friend Josh (Adam DeVine) invites her out for karaoke, but she’s not interested, and she resents him somewhat for staring out the window by her desk to look at a billboard featuring a swimsuit model (Priyanka Chopra). Finally, Natalie’s assistant Whitney (Betty Gilpin) wastes time at work watching rom-coms on her computer. This allows Natalie to launch into a diatribe about all the cheesy tropes of romantic comedies, everything from saccharine pop songs to flamboyantly gay friends of the protagonist who have no lives of their own.

On the way home from work, Natalie catches the eye of a handsome man on the subway. After what begins as a seeming meet-cute, the man mugs her, trying to steal her purse. Once Natalie turns the tables on her attacker and escapes with the most durable handbag ever created by man, she runs into a steel support beam, knocking herself out. She wakes up in a hospital, being attended by a doctor who she notes is “too hot to be a doctor” in an “emergency room” that looks like a private ward.

Natalie escapes back into the city to see that everything’s changed. Every man she passes compliments her beauty. Her dingy apartment is a huge luxury unit. New York no longer smells like urine. After a few too many coincidences and cliché moments, Natalie realizes that she’s woken up inside a romantic comedy. Even worse, once she notices a few well-timed beeps and other noises that prevent her from saying “fuck,” she further bemoans that it’s a PG-13 rom-com. 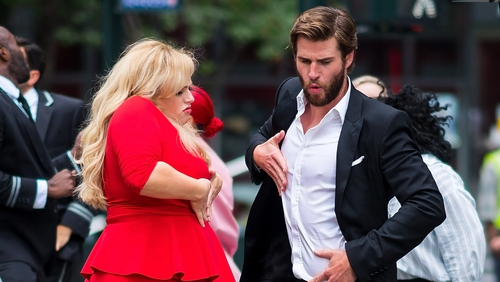 Everything in Natalie’s world gets turned on its ear in a fantastic display of subverted tropes. Josh has a meet-cute with Isabella, the model and “yoga ambassador” (Natalie accurately observes that that’s not a thing). Her slacker neighbor Donny (Brandon Scott Jones) is so over-the-top gay that Natalie thinks he’s setting the LGBT movement back 50 years, but he’s still ready to help her with every possible problem because he has absolutely nothing else to do. Whitney is now her hated business rival because no two women in a rom-com are allowed to get along. Sentimental pop songs offer well-timed intrusions into basically every scene.

Even Blake is into her, and is also now Australian. In one of the more inspired bits, the pair hook up, but as soon as sex is about to happen, Natalie simply wakes up the next morning to see Blake get out of the shower. She makes several attempts to initiate actual intercourse with the same result. It’s a much less subtle – but still very effective – take on Jeff Daniels’ whole “Wow, the scene didn’t just fade out when it was time to make love” observation from The Purple Rose of Cairo.

The rest of the plot from here on out is as formulaic as they come, but again, that’s the point. Natalie’s checking off each tired bullet point on the way to finding her “true love” so she can get back to her normal life. What really makes this work is the level of commitment to the various gags. For example, in the rom-com world, it’s not just that things are brighter and cheerier. It’s the fact that Natalie and Blake can take a limo ride across Manhattan in 18 seconds, passing a flock of birds flying in a heart shape formation, and that all of the street signs marking No Parking zones are replaced with suggestions on how to propose marriage. Even the subway where Natalie was mugged has its signs replaced. A team of divorce lawyers is now kissing on their banner ad, and the subway map of Manhattan island has been changed into a heart. I fully admit that I started hunting for other Easter Egg sight gags after catching that one.

In my head, this is what the good version of I Feel Pretty might have looked like. Natalie isn’t all that confident, but she’s never truly down on herself. Also, it’s more believable for Natalie to exist in this clear fantasy world from a head injury than for Amy Schumer to just delude herself from a similar bonk.

But most importantly, it should be noted, I am not a fan of Rebel Wilson. I’ve mentioned this before. I hate that Hollywood only seems to cast larger actors so they can be reduced to a string of fat jokes, and it’s even worse when someone like Wilson leans into it, as if she’s trying to be the second coming of Chris Farley.

Here, however, she finds the sweet spot. She’s boisterous, funny, and even engages in some physical comedy that doesn’t rely entirely on her being chubby and stumbly. It took years, but at least for one film, she’s won me over, and it’s not because of her character or any particular joke. It’s because she portrayed a normal person who acts in a normal way that can be reasonably discerned as the actions of a normal human being in this messed up situation. And also because she spoke out loud basically every cynical joke I was thinking of. By the time we get the Bollywood-esque dance number to cap off the proceedings, I was ready to join in myself.

Join the conversation in the comments below! What film should I review next? What’s the best movie you’ve seen from an actor you don’t like? Am I the only one who’s been to New York and not smelled piss? Let me know!

One thought on “Still No, But That’s the Point – Isn’t it Romantic”