When I went over the Documentary Shorts a few days ago, I mentioned that with each of the three Short categories this year, there’s a striking similarity, in that with each list four of the five nominees have a common thread. With the Documentaries, it was the fact that all but Period. End of Sentence. were kind of downers. That makes a bit of sense, as documentaries, especially prestige docs, tend to deal with pretty heavy material.

Thankfully with the Animated Shorts, we don’t always have to worry about being depressed. In fact, more than any other Short category, this is the one that most often has the lighthearted and funnier fare. There are still some weighty themes here and there, and you’ll be hard pressed not to find someone getting choked up about something, but when it’s all said and done, this is the one category where you can count on at least having a laugh or two and leaving with a smile on your face.

This year, there’s one eerily similar vibe between four of the five nominees. With the exception of our first entry, every nominated film deals with a parent-child dynamic in one form or another. It’s an interesting bit of commonality, to the point that I almost wonder if the Animation Branch voted for those four to make it in out of the 10 shortlisted films, and there just wasn’t a fifth, so they chose the funniest one to round things out. Animal Behaviour – Alison Snowden and David Fine
We kick things off with the one film that doesn’t really deal with parents and children, although there are a couple of jokes here and there that mention children indirectly. In this absurdist Canadian entry, we look in on a group therapy session in a psychiatrist’s office. The twist? The doctor and all of the patients are animals, and much of the humor is based on the ironic idea that actual animals would go to therapy to curtail their primal urges.

For example, the first patient to speak is a leech who is clingy and codependent with her boyfriend. Similarly, the doctor himself boasts that he has triumphed over his addiction to sniffing butts. A pig is a recovering chocoholic (even though he eats everything else in the room). A praying mantis has trouble finding a long-term relationship because she murders and devours all her boyfriends during sex. The group is joined by an ape later on who has some serious anger issues. The jokes are obvious, but they all land spectacularly, and the escalating drama of the farce as tensions rise is just a note-perfect bit of writing. It all comes to a head in hilarious fashion, and because of the shared theme of the other entries, it stands out against the group. Bao – Domee Shi and Becky Neiman-Cobb
This is the official Pixar submission for the year, and by definition it’s the most accessible. It ran in theatres before Incredibles 2 and is included on the DVD. This is pretty standard procedure at this point. Because it comes from the House of Mouse, this is likely the only entry the average person will get to see if they don’t attend a screening of the entire category.

For those unfamiliar with the story, a Chinese immigrant woman makes dumplings for herself and her husband. As she’s about to eat the last one, it springs to life and grows limbs, crying like a baby. The woman instantly falls for the dumpling and raises it as her own son, sharing laughter and tears as the youngster at first depends on her for everything, but then grows up, becomes more independent, and moves on with his life, including – gasp – becoming engaged to a white girl. This is all a projection of the woman’s empty nest stage, and the ending twists and reconciliations are incredibly heartfelt. The animation is a bit too blobby for my taste, but given that the protagonist is a dumpling, it makes sense. Late Afternoon – Louise Bagnall and Nuria González Blanco
In this entry from Ireland, an elderly woman named Emily is being tended to by what appears to be a visiting nurse named Kate. Kate is there to pack up Emily’s belongings, as she’s going to be moving into a nursing home. It’s clear from the off that Emily has signs of dementia, as she mentions that her memory is a bit faulty. As she sips tea and looks over photo albums, she has brief flashes of remembrance, particularly as it relates to her father, husband, and children.

The storyline and the plot twists are fairly predictable, but that doesn’t lessen the emotional impact when they finally arrive. There are some brilliant depictions of Emily’s mental state in the forms of scenes that aren’t fully colored in, blurred lines, and random splashes of color. Also, in a brilliant creative choice, Emily is the only character in the film animated without a neck. Literally her head floats above her shoulders, a lovely visual symbol that she’s losing her mind. It’s similar to a different short that was included in the “Highly Commended” section of this category’s screenings a few years ago, but then it was played for laughs. Here it’s all too serious, and I confess that a tear or two ran down my cheek when it was all said and done. One Small Step – Andrew Chesworth and Bobby Pontillas
A co-production of the US and China, One Small Step deals with a father-daughter dynamic. A young girl dreams of becoming an astronaut, and for her sixth birthday, her father, a cobbler, makes her a pair of space boots. He’s a humble immigrant (which makes two entries here about parent-child relationships among Chinese immigrants), but he lives for his daughter’s happiness. Whenever she has a setback in school or in athletics, she tends to compound her misfortune by accidentally breaking her shoes. After tragedy strikes, it’s an unexpected loving keepsake that helps her turn everything around.

Like some of the best animated shorts, this film is largely silent, apart from general grumbling noises representing various moods and emotions. The 3D animation is simple yet effective, particularly in the use of projected light. Nothing in this film is groundbreaking, but it’s undeniably sweet. 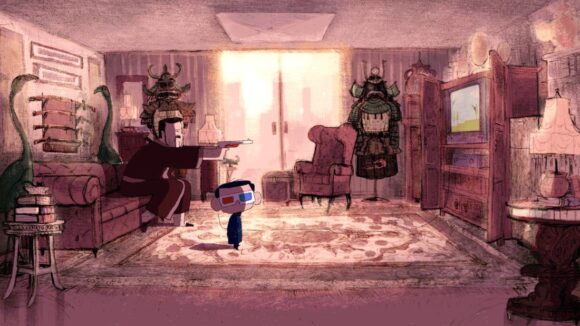 Weekends – Trevor Jimenez
Another entry from Canada, Weekends has a little bit of prestige behind it, as it won the Annie Award in this category. It should be noted, however, that this was the only nominee in both fields, so take that with requisite salt. This also stands as a quasi second entry for Pixar, as Trevor Jimenez is a former Pixar employee, and he used the company’s co-op program to accumulate the resources needed to make the picture. As such, the Pixar brass get special thanks in the credits.

The longest entry in the field, the film uses charcoal and pencil sketch to depict Trevor’s life as a child of divorce, splitting time between his mother’s house in Hamilton and his father’s bachelor pad in Toronto. The film begins with his mother a bit dour and his bedroom not even complete, while his father spares no expense to be the “cool dad,” showing off tons of video games, toys, and samurai weapons in his apartment, and picking Trevor up every Friday in his sports car, which always plays “Money for Nothing” by Dire Straits (one of the more brilliant uses of licensed music I’ve seen recently). Eventually, the dynamic shifts, as Trevor’s mom moves on with her life and career, despite some bumps in the road, and his dad matures and remarries. It’s an interesting story, and like Bao and One Small Step largely silent. What bothered me were just some unresolved bits, like the fact that his mother always wears a neck brace, and that there’s a neighbor across the way from his dad’s place that he waves to but never meets. This didn’t resonate with me as much as I’d have liked, but I will say it was nice to see a divorce story where it’s not all about the emotional trauma of the kid. He was just an observer as his parents dealt with the reality of the end of their relationship and moved ahead with their own lives. So kudos on that front.

Before I rank the films, as I alluded to earlier, because cartoons tend to be the shortest of the Shorts, the Animated screening includes bonus entries, dubbed “Highly Commended.” This time there were two, and oddly, neither of them made the shortlist, so now I’m curious as to how these extra shorts get chosen.

The first is Wish Box, about a pirate who finds a treasure chest only to discover that it’s empty. His monkey companion, however, can reach in and pull out anything his little monkey heart desires, which is mostly fruit. The pirate captain tries desperately to get the monkey to wish for gold, before finally succeeding too far and losing everything. It’s a nice, slapstick take on the “Monkey’s Paw” fable, and was definitely good for a few laughs.

The other film is called Tweet Tweet, and is from Russia. Given the name and the source, I was amazed it wasn’t about Donald Trump. Instead it’s about a very life-like bird on a wire, who encounters the feet of a baby girl. We never see this person above the knee, and we have no idea how she got on the cable, but we follow her and the bird over the course of her life as she grows, marries, becomes a war widow, has children of her own, and eventually reaches the end of the line, taking the final step to literally shuffle off the mortal coil. It’s beautifully animated, but the thematic weight just isn’t there. Odd to say for a short, but it probably would have been better if it were longer and more fleshed out.

Both of these films were very good, but I wouldn’t slot them in place of any of our actual nominees.

Next up: Just four more categories to go, and tomorrow we’ll deal with one that was temporarily slighted by the Academy, and arguably the only one I’d have agreed with doing so, because it’s likely already been won, and the winner will get other opportunities to accept on stage. It’s Cinematography!

Join the conversation in the comments below! Which film gets your vote? What is the deal with all the parent-child entries? Would you eat your own kid if he was a delicious Chinese dumpling? Let me know!