If nothing else, the new Nickelodeon animated film Wonder Park will have a bit of noteworthiness in the annals of 2019 cinema, but for all the wrong reasons. While the film was officially directed by former Pixar animator Dylan Brown, he is not credited in the final cut of the movie, because Paramount fired him for myriad allegations of abuse and harassment. In a way, it might be a blessing in disguise for him, because the movie is little more than a mishmash of ideas lifted from much better movies. I certainly wouldn’t put it on my résumé.

Serving as a de facto pilot for an upcoming Nick TV show (like Jimmy Neutron before it), the movie has some decent animation and an A-list cast, but it really never goes anywhere, scratching the surface of a good idea and then abandoning it just as quickly. Every time we get to the point of depth or even the slightest hint of profundity, it’s instantly tossed aside for a sight gag or a perfunctory action sequence to justify the upcharge for 3D.

The story features a pre-teen girl named June (newcomer Brianna Denski), who along with her very supportive mother (Jennifer Garner, who receives top billing despite only being in the film for about 10 minutes) devises and builds model attractions for an imaginary theme park called Wonderland. Why is the film therefore not called Wonderland, you ask? Because I’m guessing Nickelodeon didn’t want to risk a copyright lawsuit against Disney, especially when you consider the other “wandering lost girl” story tropes the film contains.

After her mother becomes gravely ill and goes away for treatment (presumably cancer, because we just can’t have a female protagonist without a missing mother in an animated film, now can we?), June abandons Wonderland, shelving her models and destroying her blueprints. She becomes overprotective of her doting father (Matthew Broderick), and skips out on a bus trip to a sleepaway math camp to go home to be with him, afraid of leaving him to his own devices (one of the few humorous bits is her imagining him breaking his legs on loose golf balls and blowing up their house via the toaster). Chasing a fragment of her discarded blueprint that appears out of nowhere like the feather in Forrest Gump, June travels into an enchanted wood and stumbles upon a roller coaster cart that takes her into the now dilapidated Wonderland.

In the world she and her mother imagined, Wonderland was the perfect amusement park, overflowing with joyful parents and children, populated with rides that defy the very basic tenets of physics. Animals run the park, led by a chimpanzee named Peanut (not to be confused with Jeff Dunham’s monkey-like puppet or my next door neighbor’s super adorable dog), who has a magic marker that can simply draw the next attraction with the imaginative whispers of June and her mother (Peanut is voiced by two-time Tony winner Norbert Leo Butz, whose most famous movie role was probably in Dan in Real Life).

In this dystopian version, the rides are in shambles, and Peanut is missing. The park is overrun by “chimpanzombies,” the Chinpokomon of Wonderland (over 5,200 varieties, I MUST BY THEM ALL! I MUST BUY THEM ALL!), who serve mostly as a convenient and endless horde of disposable villains. June teams up with the remaining animal ushers of the park: the leader, a warthog named Greta (Mila Kunis), a narcoleptic bear named Boomer (Ken Hudson Campbell, who sounds like Brian Doyle Murray but isn’t, best known as the commercial pitch baby and short-lived sitcom star “Baby Bob”), twin beavers Gus and Cooper (Kenan Thompson and Ken Jeong, respectively), and a posh porcupine named Steve (John Oliver, essentially playing himself), who has a crush on Greta. Their quest is to rescue Peanut, find a way to restart the “Clockwork Swings,” which somehow power the park, and stop the chimpanzombies from sending everything in the park into “The Darkness,” a cloud over the premises that sucks up all joy. 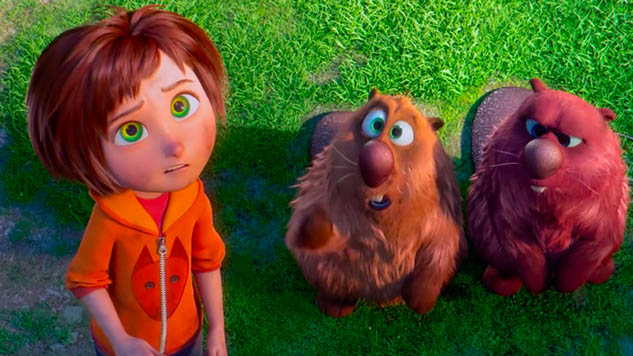 The ensemble is an exercise in stunt casting at its most extreme, because there are, essentially, three versions of it. In the releases for the UK and Australia, the beavers and the bear are recast (the fourth Doctor, Tom Baker, voices Boomer the Bear in the UK, for example). Such pandering with the cast serves no purpose for the intended audience, because the kids have no idea who any of these people are. So really, it’s fan service for the parents who schlep themselves to the theatre to placate their kids, and is as cynical as the emo teen that June is sure to develop into if her mother doesn’t magically get healthy.

There’s also a large degree of tone deafness when it comes to June herself. Early in the film, she lets her imagination run too wild and decides to construct her own neighborhood roller coaster with the help of her friends, especially the dorky Banky (Oev Michael Urbas), who crushes on her hard. Never mind the hand waving it takes to believe that a neighborhood of elementary school students could build such a device unsupervised. Never mind that in the first-person perspective 3D-justification execution of the stunt that June and Banky should have been killed several times over. By the time the test run is finished, there’s damage to the neighborhood that would easily cost tens of thousands of dollars to repair. Does June get punished, or even mildly discouraged? Of course not. Dad just cuts checks to the neighbors and Mom lightly scolds her for about five seconds and threatens her with extra chores before hugging her and telling her how special she is. Any one of us would have probably been given a righteous whoopin’ by our parents back in the day. Instead, June gets a pass because she’s bright and creative? Dafuq? Now, I say this knowing that I am whiter than bread, but that is some extreme white people shit right there! It’s one thing to encourage a child’s imagination, but it’s quite another to brush aside felony-level vandalism and property damage because it might make her feel sad. It must be nice to live such a privileged life.

Thematically, the film is just a jumble of ripoffs. Distilling the movie to its most basic elements, it basically takes Inside Out, reverses the moral (instead of embracing your personal darkness, you should slide away from it via giant bendy straws), throws in some tired Wizard of Oz and Alice in Wonderland tropes, and stages the whole thing inside a glitched out copy of the video game, Roller Coaster Tycoon.

Now, this could have been an interesting journey of imagination, but sadly, the film abandons every chance at creative entertainment. June could learn to cope with loss or sadness in general, but instead she’s completely closed off the moment her mother falls ill. She could learn to temper her ambitions within reality and learn to let her creative juices flow in a responsible way. Instead they place the unconscious bear on the top of a rickety broken coaster because reasons. Even the idea of slowly rebuilding the park one attraction at a time, like the levels of a video game, could be intriguing, but it just gets waved off in favor of four or five absolutely impossible (not to mention grossly unnecessary) chase sequences. Hell, on the bus to math camp the kids sing a song about pi (which I guess is somewhat appropriate, as the movie debuted the day after Pi Day), which made me yearn for lazy fart jokes. Honestly, it would have been a step up.

This movie is just a waste from beginning to end. It’s yet another cynical cash grab meant to sell toys in anticipation of a new TV series, which in itself isn’t inherently bad, but the execution is a pure mess of lifted tropes from way better properties, and a lost opportunity to introduce children to a new, creative protagonist. Some of the visuals are nice, and there are a couple of jokes that land, but on the whole the thing is dead on arrival. The production was allegedly plagued with inappropriate conduct from the director, which is even more glaring when you consider how juvenile the intended audience is. This had the potential to be quite the fun ride. Instead, it was about as enjoyable as a broken down carousel.

Join the conversation in the comments below! What film should I review next? What animated films are you looking forward to seeing this year? Why would a porcupine want to pork a swine? Let me know!