One of the favorites to come out of this year’s Sundance Film Festival is The Mustang, a joint production of the US, France, and Belgium, which won the NHK Award in Park City. It’s co-written by Brock Norman Brock (Bronson), Mona Fastvold (Vox Lux), and Laure de Clermont-Tonnerre (Diane from The Diving Bell and the Butterfly), who also directs, this being her first feature. What gets the real attention is the fact that Robert Redford – who is at this point retired from acting – signed on as an Executive Producer, which is presumably why it got featured status at Sundance.

If that sounds like a bit of insider trading, you’re probably right, and in most cases, I’d be calling bullshit right from the off. However, this is a case where the association is most definitely warranted, as The Mustang has a heartfelt story of redeeming outlaws in the American West that feels distilled from Redford’s best works. With a small, strong cast, a great story, and some superlative technical elements, the film is an early contender to be the best movie of the year.

From the opening moments of the film, you’re drawn in, figuratively and almost literally, as opening text about wild mustang horses being tamed by prison inmates for auction and rehabilitation opens to a vast open frontier, where low flying helicopters corral a small herd of horses, flushing them out from a larger pack in an enthralling display of non-violent, open space hunting. It reminded me fondly of the buffalo hunting scene from Dances With Wolves, only without the killing. The combination of the immaculate scenery with the cacophony of noise from the horses and choppers makes for a visceral experience that ultimately hurts no one, which while intense, is in its own ironic way, comforting.

That sort of bombastic opening is immediately juxtaposed with a scene of forced calm, as a prison psychologist (Connie Britton) interviews the film’s main character, Roman Coleman (Matthias Schoenaerts), a felon who is being moved from solitary confinement to the general prison populace. Apart from his unspoken crime (tearfully revealed later in the film), Roman is established as aggressively antisocial, but now he’s forced to be among the other prisoners and have a cell mate, so he has to find some way to function within the prison community, and that includes a vocation within the walls. The stoic, gruffly soft-spoken Roman prefers the outdoors, so he’s assigned as a stable hand, literally shoveling shit around the pens for the horses that are brought in for the training program.

While working, Roman comes across a particularly rambunctious mustang who constantly kicks the doors of his pen, and is not allowed out. Despite being warned to never look in a horse’s eyes, Roman makes that taboo contact, which temporarily calms the horse. This leads the training program’s director Myles (Bruce Dern giving his best performance since Nebraska) to take Roman on as a member of the team, training him on how to break the horse so that it can be sold at auction in a few weeks. 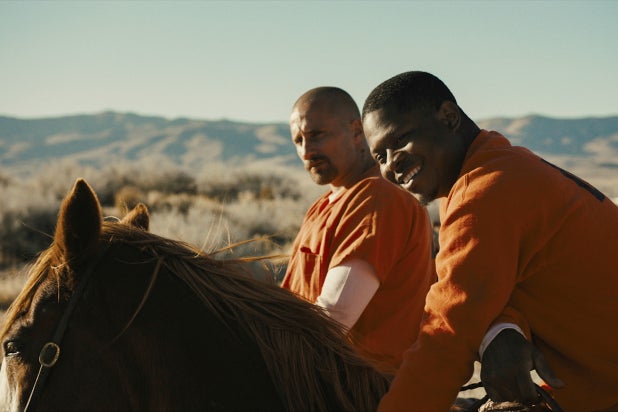 Roman’s journey in the film pulls him in three different directions as part of his rehabilitation, a sort of wrangling of his own if you will. First and foremost is the training of the horse, which he names Marquis. It’s a lengthy process, with several ups and downs, but he’s aided and supported by Myles and by fellow inmate Henry (Jason Mitchell of Straight Outta Compton and Mudbound) who’s a more seasoned hand in the process. Secondly, he’s trying to reconcile with his now-pregnant teenage daughter (Gideon Adler, the breakout star of Blockers, at least in my opinion), who wants to be emancipated from him in order to move away and start a new life. Third, there’s his cell mate Dan (Josh Stewart), who at first seems innocuous, but is later revealed to be a drug addict who threatens Roman’s daughter in order to force him to smuggle ketamine around the prison.

Now, on the surface, a lot of this could seem trite and overly melodramatic. And I will concede that there are moments when the main visual metaphor (of Roman and Marquis both being wild animals who can’t be tamed and yearn for freedom) is laid on a little thick, but the strength of Schoenaerts’ performance – as well as Dern, Adler, and Mitchell – lifts the proceedings well over the level of cliché. I can honestly say that I never thought I could sympathize with a man punching a horse. But thanks to Schoenaerts, here we are. It’s part of Redford’s career hallmark to highlight the nuance and humanity among the criminal set, but the script and de Clermont-Tonnerre’s direction breathes new life into what could have easily been dismissed as a Western trope.

Almost as importantly, the creative technical aspects of the film are something truly special. The sound effects are the best I’ve heard so far in the early going this year. The cinematography is equal parts epic and intimate depending on the needs of the moment. As powerful as the opening wrangling sequence is, there are scenes of Roman in solitary with a single beam of light from a narrow window, his only glimpse of the outside world, that are just as achingly beautiful. And there are some really clever touches when it comes to the contraband network within the prison, with solitary prisoners passing notes to one another via an intricate system of pulled strings on the floor that look like little paper rats in the dank lighting scheme.

But most important of all, whatever the animal wranglers on the set got paid, it wasn’t near enough. The sheer magnitude of the undertaking to use all these trained horses (three for Marquis, two for Henry’s horse T-Bird, and dozens more throughout the film) in varying degrees of wild and tame is nothing short of amazing. It doesn’t often get recognized, especially not in the awards circuit (apart from maybe considering it an element of Production Design), but working with animals on set is a very specialized job. Even the tiniest insects are highly practiced in what they have to do by dedicated professionals whose sole responsibility is making sure that they do the work without hurting the human actors or getting hurt themselves. So to take fully trained horses, work them into a frenzy where they can believably come across as wild, and then to slowly temper them back down over the course of the film (knowing that the movie is shot out of sequence, so those vacillations can be numerous during production), is quite the achievement indeed, and one worthy of way more lauding than I can give here.

Yes, this movie has Redford’s earmarks all over it, which would make anyone at least a touch skeptical about its inclusion in the Sundance Festival. And yes, it would have been so easy to make this a generic redemption story with some pretty scenery and some horse opera. But every so often, a meeting of creative minds makes for a nearly note-perfect result, and as Robert Redford gets ever closer to riding off into the sunset for good, it’s uplifting to know that his legacy can be left in very capable hands.

Join the conversation in the comments below! What film should I review next? What’s your favorite horse movie? How awesome are horse tranquilizers? I mean, not that I would know. What are you looking at? Shut up! Er, let me know!