Laika Studios now have five feature films under their collective belt when it comes to stop-motion animation. The previous four (Coraline, ParaNorman, Box Trolls, and Kubo and the Two Strings) were all nominated for the Oscar for Animated Feature, and rightfully so. In addition to eye-popping animation and visual effects that continually breathe new life into a format that becomes more niche with each passing year (in favor of 3D CGI), the beauty of those first four films lies in the studio and the storytellers’ abilities to deliver weighty themes to the young target audience without upsetting them or talking down to them. It always puts a smile on my face to know that the children who are exposed to these films are given a ton of credit and treated as intellectually competent.

Laika’s latest feature, Missing Link, is certainly a departure from the studio’s previous outings, in that this is by far the lightest film they’ve ever done, both in theme and aesthetic motif. There are no real existential threats, the stakes are relatively low in the grand scheme of things, and death – while acknowledged – is not presented as the grave abstract concept that it has been in earlier work, particularly Coraline and Kubo. The emotional weight of the movie is more grounded in relatable characters than in supernatural or mystical allusion. Because of that, even though this is nowhere near as heavy as Laika’s previous outings, it’s still a massively satisfying adventure, filled with humor, good character development, and the same gorgeous animation we’ve come to expect after a decade of stunning content.

Hugh Jackman voices Sir Lionel Frost, an adventurer and crytpozoologist of sorts, who wishes to track down evidence of legendary creatures, and use the proof to gain admittance to an elite club of English adventurers, led by stuffiest of stuffed shirts, Lord Piggot-Dunceby (Stephen Fry). After Frost’s most recent botched attempt to lure out the Loch Ness Monster (by playing a bagpipe underwater – Nessie does emerge, but she destroys his camera equipment and nearly devours his Watson-like assistant), he comes across a letter from America, claiming to have proof of the existence of the Sasquatch. Frost, with nothing to lose, bets Dunceby that he can bring back Bigfoot in exchange for membership. Dunceby agrees, but (in one of the best line readings of the film) decides to sabotage him in secret, in a manner befitting a true gentleman… hiring someone to kill him.

In the Pacific Northwest, Frost does in fact encounter a Sasquatch, who can not only speak (Zach Galifianakis, essentially playing a living teddy bear), but who also wrote the very note that drew Frost out. Dubbed “Mr. Link” before adopting the moniker of “Susan” (in honor of a woman who befriended him once, a great character scene regardless of the silliness), the great furry man-beast is the last of his kind, but through studies of Frost and other adventurers, believes that he has cousins in the Himalayas – Yetis – who live in the mythical haven of Shangri-La. Frost agrees to take Susan there in exchange for him providing DNA evidence (which would be somewhat useless in the late 19th century, but whatever) to get into the adventurers club in London. 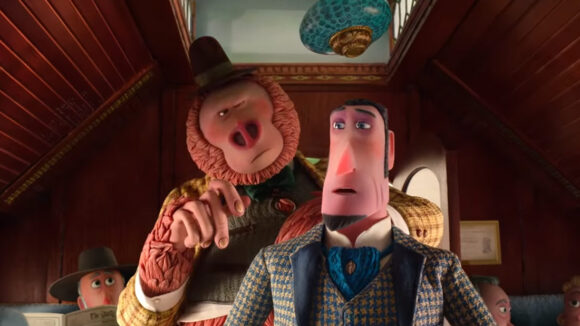 Before they make their journey, the pair have their first of many encounters with Willard Stenk (Timothy Olyphant), a Yosemite Sam-like buffoon of a bounty hunter hired by Dunceby to assassinate them. In one of the few frustrations regarding this film, every time they outwit Stenk and evade him, he conveniently pops up right in their path at the next checkpoint of the journey, without any explanation for how or why he was able to track them. Taking their first detour, Frost reunites with Adelina Fortnight (Zoe Saldana, whose Latin accent fluctuates throughout the movie), his former girlfriend and widow of Frost’s former friend and adventuring partner. After insulting her with some toxic masculinity in an attempt to get her late husband’s map of the Himalayas, she decides to join them, assertively adding herself to the team rather than let herself be recruited and be used as a prop. There is some romantic tension between her and Frost, which the script rightly (and funnily in parts) undercuts at every opportunity. Adelina is her own woman, at times the most capable one in the scene, and she will not be reduced to a love interest. Despite the iffy voice and absurd character design, she’s a great foil for Frost and a decent role model for the young girls in the audience.

The plot is fairly by-the-numbers, and the dialogue is mostly on point, with some really clever humor. In one particular late scene, the leader of a xenophobic tribe (Emma Thompson) has captured the team, and upon their attempt at escape shouts, “The people we don’t want here are trying to leave! We must force them to stay!”

Where the film really shines is in two specific areas. One is in the literal sense, as this film is brighter than any other Laika film, not just in tone, but in actual presentation. There’s more sunlight and shadow play than any of the previous four films, and even the darker scenes of inclement weather (a storm at sea while on a ship, for example) have a much more elevated color palette than Laika’s previous work. As is tradition at Laika, during the credits we get to see the team assemble a shot. Here it’s a scene set in India where the crew rides an elephant on the way to Nepal, and it’s absolutely breathtaking, given the scale of the film and the light/color schemes on display.

The second superlative aspect is the morality of the play. Even though this film doesn’t deal with mortality and other grim concepts like its predecessors, Missing Link does have plenty of room to discuss mature ideas with its audience. Strong, relevant themes like loneliness, tribalism, elitism, class struggles, diversity, and acceptance are all directly conveyed to the young target crowd through sharp-witted humor, profound visuals, and genuine pathos through highly-detailed facial expressions in the characters. They may not be as morbid as the other films in Laika’s library, but they’re just as valid and valuable to the impressionable youngsters in the theatre.

This movie isn’t the best bullet in Laika’s chamber, but it stands as proof that the studio can offer more commercial fare than they have in the past. There are myriad flaws (anachronisms, convenient bad guy appearances, the fact that Susan idolizes Frost yet can read and therefore should know from his jokey headlined newspapers that the world thinks he’s a fraud, etc.), but the good far outweighs the bad. Just like its forebears, I will be stunned if Missing Link isn’t nominated for Animated Feature next year, though sadly, its fate as an also-ran will likely be the same as well. I mean, one has to assume that unless Toy Story 4 is just an unmitigated failure, the award is Pixar’s to lose. That shouldn’t stop you from seeing this movie, however. In a time when there isn’t too much good family entertainment to be had, this is the perfect film to share with yours. You’ll laugh and marvel at the animation, the kids will laugh and fall for the characters, while maybe learning a valuable lesson or two. Just be prepared to shop for a stuffed Susan when it’s all said and done.

Join the conversation in the comments below! What film should I review next? Are you a Laika fan, and if so, which is your favorite? Can we just substitute this movie for every single Bigfoot-hunting show on TV? Let me know!

5 thoughts on “Lighter Than Normal Laika Fare, But No Less Dazzling – Missing Link”