Every once in a great while, you get to see something truly original. In the case of The Intruder, it is seeing the quite possibly unprecedented villain turn of perennial good guy Dennis Quaid. Seriously, while I have a couple of vague images in my head of him putting on a wry, cheeky smile, I can’t actually think of any movie I’ve ever seen where he’s the antagonist. Given his body of work, I’d almost wonder if it was even possible.

And yet, here we are. Not only do we have a film with Dennis Quaid as an obsessed, murderous stalker, but he’s actually really, really good at it. Unfortunately, the rest of the film sucks out loud.

Originally entitled, Motivated Seller when it was sold at last year’s Cannes Film Festival, the film focuses on a young, well-off couple, Scott and Annie Howard (Michael Ealy and Meagan Good from the Think Like a Man films). Scott is a successful advertising executive, while Annie is a magazine writer, which allows her a lot of down time at home. After his latest financial conquest, Annie convinces him to finally look at a rural house that she’s had her eye on. Being a “country girl” at heart, she’s tired of urban life in San Francisco, and wants a more rustic setting to eventually start a family.

The first of many red flags is raised when the Howards arrive. They see a deer drinking from a stream on the property when the owner, Charlie Peck (Quaid), jumps at them with a loaded shotgun. He then, “shoots Bambi,” as Scott calls it, noting that the surrounding land is used by hunters throughout the area, and that there’s a local ordinance to thin out the herd. Annie is startled, but Scott is already beyond skeptical.

Things do not change much as Charlie shows the couple his house, built more than a century ago, and the only home he has ever known. He is widowed, and his daughter has convinced him to move to Florida with her. He guides them through the various rooms, furniture, and tapestries, a testament to a lifetime of work and memories. Scott gets increasingly creeped out by tacky decorations, while Annie falls more and more in love with the place. When Scott asks how much he wants, Charlie bluntly says he wants $3.5 million. As Scott is prepared to walk away, Charlie acquiesces, knocks down the price, and promises to leave all the furnishings behind. A week later, Charlie drives off, intending to stay at a local motel until he can fully make his move, and the Howards move in, making immediate changes to the decor.

Within a few days, Charlie is back on the property, mowing the lawn as if he’d never left. Little visits and coincidences continue to build up, with Scott (along with best friend/corporate dude-bro Mikey, played by Joseph Sikora from Jack Reacher) becoming very suspicious and paranoid about Charlie’s intentions and background, while Annie merely pities the old man, being far too trusting. It’s also clear that Charlie is extremely attracted to Annie. It all builds to a survive-the-night attack on the house by Charlie, with predictable results. There are a couple of fun twists along the way, but the story is about as straightforward as they come. 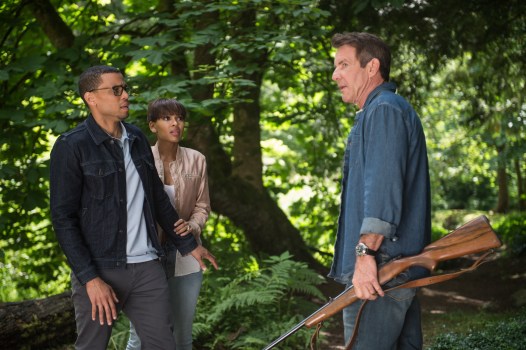 Really, apart from Quaid, the entire film is pretty slapdash. The dialogue and exposition are beyond clunky, establishing Scott as a generic corporate slug (Scott: How did you plan this party? I only closed the deal an hour ago. Annie: I knew you’d close the deal. Mikey: A toast to the top earner at the company!). Some horribly bad ADR (Automated Dialogue Replacement, i.e. overdubbed lines recorded in post) gets inserted pretty much every time Annie’s face is turned away from the camera for the entire first half of the film. The scenes of romance and sexuality are almost uncomfortably sterile, like a softcore pantomime where everyone is fully clothed. They were so bad I expected “You Are My Rose” to start playing and for Tommy Wiseau to show up and try to hump Annie’s navel. The house (and its land) is called “Foxglove,” after the beautiful, yet poisonous flower, but aside from Charlie holding a bouquet late in the film, the concept is never paid off or even revisited, despite it being presented as a key piece of story and thematic information. The fight scenes, despite being at most 2-on-1, are shot in shaky-cam and hastily edited for maximum chaos as if they’re a part of a climactic CGI battle in a Hollywood blockbuster.

Logic also gets thrown out the window readily and without a second thought. Annie wonders out loud if they can move into Charlie’s house in a week, which even in a private sale would never happen. The entire film rather insultingly portrays Annie as a naive damsel in distress, too trusting for her own good, yet when shit hits the fan Scott leaves a message on her cell phone for her to call the police, rather than just doing that himself. Scott himself notes throughout the film that he has a zero tolerance policy when it comes to firearms on the property, yet the entire story leads to a territorial battle that basically amounts to former NRA President Wayne LaPierre’s tired, nonsensical, and completely batshit assertion that “The only thing that stops a bad guy with a gun is a good guy with a gun.”

The only thing that saves this movie is Dennis Quaid. As Charlie Peck, his villain turn is deliciously over-the-top, with Quaid chewing scenery like fine dining. He’s playing so far against type and it’s clear he relished every moment of it. There’s a terrific scene where he sits on a cot bed in his temporary home, practicing facial expressions to make him appear less menacing, including a Jack Nicholson-esque Joker grin that made my heart sing. Knowing the house like no one else in existence, he’s so completely adept at hiding behind corners and finding blind spots in the shadows that he becomes an absolutely believable stalker for this one particular context. Even in the most idiotic moments (like stabbing a door with a knife and sticking his head through a la The Shining) there’s a manic glee in the performance. Exceedingly rare – if not unheard of – I’d honestly love to see him play a bad guy again. He’s surprisingly good at it.

Apart from that though, this movie falls completely flat. There are hints at a better film under the surface, but it utterly lacks the ambition to go for it. There could have been interesting racial overtones, given the Howards’ status as wealthy black people versus a more working-class subject in Charlie (the headline for this review something of wish fulfillment for what might have been). There could have been compelling foils and antagonists that would make for interesting pre-climax victims, but the best we get is Mikey, who bitches about a cigarette burn in his luxury car after he literally pisses in a stone fountain outside the house (“There’s like, four bathrooms, dude,” Scott sighs). He’s such a one-dimensional douchebag that we all want him to die, but there’s no catharsis or advancement of the story in doing so.

Still, there’s something to be said about seeing something rare and beautiful, like a unicorn, or an honest politician. Dennis Quaid as a villain (and a convincing one at that) is one such treasure. I just wish it was in a better movie.

Join the conversation in the comments below! What film should I review next? What’s your favorite “against type” performance? Who the hell just has $3 million lying around to buy a house? Let me know!