You could be forgiven if you’ve never heard of Claire Denis (or if you misread her name as Claire Danes), as she’s not a name that most American movie-goers would know. If you’re a fan of French cinema, however, you’ve almost certainly come across her work. She’s one of France’s most acclaimed filmmakers, with fairly widespread international appeal, thanks to films like Beau Travail, Trouble Every Day, and last year’s Let the Sunshine In. Her first feature, 1988’s Chocolat (which has nothing to do with the Johnny Depp romance) was nominated for the Palme d’Or at the Cannes Film Festival.

If you’ve never seen her work (which has been compared to modern auteurs like David Cronenberg and Jim Jarmusch), her latest effort is a prime opportunity to expose yourself to her craft. Working with long-time collaborator and writer Jean-Pol Fargeau, Denis makes her English-language debut with High Life, a contemplative, somewhat claustrophobic sci-fi survival thriller that serves as an excellent, melancholy metaphor for the dueling mindsets of tenacity and hopelessness, anchored by a stellar lead performance from Robert Pattinson.

Presented in a non-linear format (so details I reveal here aren’t technically “spoilers”), the film opens with a look at a greenhouse garden area, with slow-panning shots set to MIDI-synth foreboding melodies. In a weird way, it reminded me of the cutscene from The Legend of Zelda: The Wind Waker, when Link first enters the Forbidden Woods dungeon area. The shot quickly cuts to dark, dank hallways with fluorescent lights flickering in and out in the tradition of mood-setting, and as the camera makes its way along various corridors with barely-functioning machinery in every other room, we hear the sound of a baby crying, building as a crescendo until it almost hurts our ears. The only respite is a slight cooing sound over a radio, revealed to be Monte (Pattinson), repairing a panel on the outside of a freaking spaceship. Inside his helmet is a baby monitor, creating an instant rebuttal to the tagline from Alien. Monte may be the only one, but in space, at least one person can hear the baby scream.

Emaciated and with a patch of grey hair at the front of his crew cut head, Monte finishes his work (losing his socket wrench to the void of space in the process thanks to an ill-timed infantile shriek), comes back inside, and puts the baby Willow to sleep. Once she’s down, he makes a log entry to a computer, giving a progress update and promising to jettison all dead weight to ensure the success of his mission. The computer responds that they have approved another 24 hours of life support on the ship, and basic functions like plumbing, electricity, and oxygen flow are returned. Once complete, Monte goes to a room filled with people held in some sort of cryogenic stasis, and one by one shoves them out of the airlock.

Before the title card even hits the screen, this is some pretty heavy stuff. Denis and Pattinson go to painstaking lengths to show just how isolated Monte is on this ship. He and the baby are the only survivors at this point, and there’s no indication of how, why, or what the mission might be. He begs the child to stop crying, telling her, “You are killing me!” which can be directed basically to the entire universe at this point. He is beyond hope, beyond faith, yet he carries on for her sake, and we have no idea why.

A series of flashbacks fill in those particular holes. In some version of Earth’s future (or alternate present), death row inmates from around the world are given an option to stay their execution – namely to go to space in box-shaped ships capable of light-speed travel (or rather, 99% of light speed) to harness energy from nearby black holes and return them to Earth for consumption. Sadly, as revealed through a journalistic interview and by the relative intelligence of the crew of shuttle #7, there was never any intention of going back. They’re still sentenced to death, just not on their planet. Even if they can reach a black hole (an eight-year journey according to Monte), they can’t possibly survive the sheer gravitational force of a singularity, much less find a way to turn the ship around and head home. And even if they did, the laws of relativity are such that while 16 years would pass for the crew, decades (if not centuries) would pass on Earth, meaning there’d be no place for them in society, and no families to return to.

It’s as much a form of poetic justice as it is sheer human tragedy. Everyone on the ship is still doomed, and given that they’re capital criminals, they are arguably more prone to violence than others. They’re still going to die, quite horribly most likely, but the state can wash its hands of the whole situation, because they have no idea how these inmates meet their ends (it takes years just for the transmissions from the ship to reach Earth; Monte’s mission updates are just like Desmond and Hurley typing the numbers into the computer on LOST, more conditioned routine than anything else).

The supporting cast of the floating dead is a fairly strong mix of American and European talent. André Benjamin (better known as André 3000 of Outkast) plays Monte’s only friend, Tcherny, a penitent man who tends the garden because it reminds him of Earth. Mia Goth (Nymphomaniac) shines as Boyse (pronounced like the capital of Idaho), a former drug addict with a very short fuse. Agata Buzek (daughter of the former Prime Minister of Poland) is a sort of poor man’s Tilda Swinton who serves a self-sacrificing and level-headed pilot.

But the main foil for them all, especially Monte, is Dr. Dibs, played by the immaculate Juliette Binoche. Chief medical officer of the ship, she was given the job to avoid execution for killing her children (only her crime and Monte’s are ever fully revealed), and has since become a mad scientist, obsessed with the possibility of artificially impregnating one of the women to see if a baby can survive in space. She is a constant tease to everyone on the ship, particularly the men, because while she collects semen samples from willing participants (in exchange for drugs), she outright forbids sexual contact between the inmates (to the point that inmates are strapped down in their beds every night), instead allowing for the near-constant use of a personal masturbation room affectionately dubbed, “The Fuck Box.” Dibs makes great use of it herself. If you’ve ever wanted to watch a mid-50s French woman ride a Sybian, have I got the movie for you! 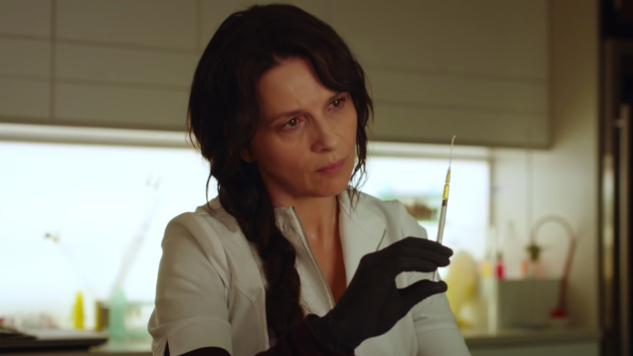 She’s constantly at odds with Monte, who in his search for redemption has adopted a completely celibate lifestyle on the ship. Dibs seduces the other men, and even parades the women as sexual objects without allowing true contact or relations, for the sole purpose of getting more “abundant” samples, with which she forcibly inseminates the women in hopes of creating a viable life. Honestly, she’s so focused on creating new children to replace the ones she killed that she could give La Llorona a run for her money.

One by one, the crew starts to die off in believable, yet graphic ways, chiefly due to the cabin fever of their four-walled ark and the machinations of Dr. Dibs. Through it all, Monte attempts to be the calming influence, but even he is not immune to all the fuckery going on. It only serves to exacerbate the fatalistic approach to his mission and his entire existence. But thanks to Dibs, Willow now exists, the cruelest of all punishments. She created this life knowing it is doomed and will never know a home. “She is mine, and I am hers,” Monte says to himself as he raises her alone, a mantra for his continued breathing. Even though it’s most likely pointless, he will continue on with the mission for her sake, because she is an innocent, and does not deserve to fall into despair.

It really is a remarkable performance from Pattinson throughout. And along with previous outstanding work like The Lost City of Z, he’s proving himself to be one of the most versatile young actors out there. I’m so glad he’s cast off the shackles of his teen idol years and proven to himself and to the rest of the world that he was more than sparkly fantasy material.

There’s also just so much great camera work on display. From the compact view of the stars once the ship leaves our solar system, to the obvious (yet no less inspired) mood lighting of each room, to the really well choreographed scenes of violence. For such a small film, there are plenty of expansive visuals, thanks in large part to the consultation and input of French physicist Aurélien Barrau, an expert on black holes.

Musically, the film is very strong as well. The ambient score gives the whole thing a retro feel, with a lot of synthesizers and old school sci-fi through lines. I was reminded at times of the 80s movie, 2010, which was a sequel to Stanley Kubrick’s 2001: A Space Odyssey (there’s a decided Kubrick influence in the visuals and sound design as well). There’s also a fairly competent end credits song called “Willow,” written and performed by Tindersticks (a British alternative band who also frequently work with Denis) with Pattinson doing the lead vocals. Dude’s got a decent singing voice, I must say!

This isn’t the most coherent plot I’ve ever seen. The non-linear story structure works to a certain point, but there are still plenty of unanswered questions about the logistics of their mission and how exactly the program even works. Character motivations outside of Monte are scattershot at best. But all of those issues to me are outweighed by the stellar visuals and acting on display. The minimalist performances and place settings throughout, which see Pattinson turned into something of a reluctant monk, are nothing short of stellar.

The film is in very limited release, so you may not get a chance to see it until it’s out on home video or digital download, but I highly encourage you to track it down if you can. This film isn’t epic, and it’s not even in the top 5 of Denis’ 30-year career, but if you want an entry point to get to know a fantastic cinematic artist – not to mention a reset button for your expectations for Pattinson – then you owe it to yourself to watch this film.

Join the conversation in the comments below! What film should I review next? What actors have surprised you the most with their development over the years? How much do you think it’d cost to install a Fuck Box in my house? Let me know!