I confess myself to be a little bit biased when it comes to Gurinder Chadha’s new film, Blinded by the Light, as I am a huge, lifelong fan of the music of Bruce Springsteen. I’ve been listening to his work since I was a child in Delaware (not too far from Asbury Park, NJ). The first song I remember hearing of his was “Glory Days,” which I sang at karaoke once and impressed the hell out of my mom, especially since I was drunk off my ass. I’ve only seen him live in concert once (as opposed to the film’s co-writer and inspiration, Sarfraz Manzoor, who is revealed at the end to have seen The Boss more than 150 times), but it was about as close to a religious experience as a Doubting Thomas like myself can get.

So yeah, I was more than predisposed to love this movie, because Springsteen is one of the few artists out there that can truly inspire life-changing moments. But I like to think that even if you’re not a fan of his work that you can still truly enjoy what is one of the real feel-good movies of the year, a poignant coming-of-age tale with parallels to today’s social issues.

Based on Manzoor’s memoir, Greetings from Bury Park (the title being a play on the Luton, England neighborhood where he grew up), the film centers on a teenage Pakistani boy named Javed (newcomer Viviek Kalra, looking charmingly like a tan Daniel Radcliffe), the son of immigrants growing up in Margaret Thatcher’s UK in 1987, when global economies crashed, unemployment was rampant, and anit-immigrant racism was at a fever pitch. Sound familiar?

Javed is about to enter a new school in order to study for his A-Levels, so he can go to college and hopefully begin a high-income career. His father Malik (Kulvinder Ghir) has just been laid off, and wants his son to have a much more lucrative life than his. He also wants him to contribute any and all earnings to the family, and honor his heritage while keeping his head down in public. Javed, however, is a budding writer and poet, penning song lyrics for his friend Matt’s (Dean-Charles Chapman) synth pop band, which Matt finds too depressing. Malik finds creative writing to be a frivolous hobby at best. The “Old World Father/New World Son” dynamic is hit hard in this movie, with just about every conceivable box checked.

After an awkward first day, begun by his father telling him to avoid girls but follow the Jewish kids to get good grades and ending with him being chased by a National Front skinhead, Javed runs into Roops (Aaron Phagura), the other Pakistani student at the school (he’s Sikh while Javed is Muslim), who lends him two Bruce Springsteen cassettes, telling him that Bruce speaks truth to their life experience. When Javed finally hears the music (beginning with “The Promised Land” and “Dancing in the Dark” – great fucking choices!), the yearning for a better future and the empathy for the working class resonates so deeply that it changes his entire outlook on life. Having temporarily abandoned his writing, he recovers his poems and gives them to his English teacher (Hayley Atwell, seemingly free from the MCU at last), who gives him the encouragement he needs to pursue his goals.

Bruce’s music ends up permeating just about every aspect of Javed’s life. He gets a job with Matt’s dad (Rob Brydon), where a duet on “Thunder Road” gives him the confidence to ask out his super liberal classmate Eliza (Nell Williams). He uses “Badlands” to stand up to some racists trying to intimidate him and Roops in a cafe. He’s able to take social gambles like going to a nightclub with his sister during the day and learns that she too is dating (their other sister is preparing for an arranged marriage). It also drives him to make stupid errors, like sneaking out on his sister’s wedding party to buy concert tickets, or insulting Matt when his dad mocks his musical tastes.

In many ways Springsteen’s music allows him to behave like a normal teenager, giving him a chance at the acceptance he’s always wanted. He takes many actions – good and bad – that many of us took in our formative years. He’s able to be an average kid and an exceptional student because Springsteen forces him out of his shell, even if that does sometimes have the unfortunate side effect of dragging the narrative down into parent/child conflict cliché at times. 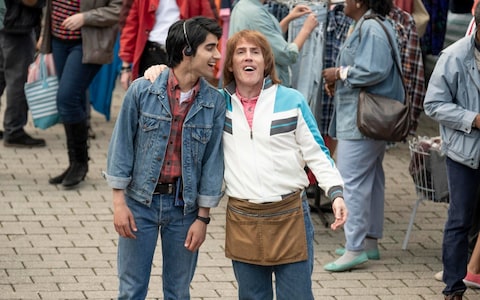 But more than that, there’s a literal joie de vivre to the whole proceeding, as the music gives Javed the hope for something better. The creative choice to project song lyrics against walls and other surfaces, or filter them through Javed’s ears via CGI is an inspired, visceral depiction of the impact of Springsteen’s work. The aforementioned performance of “Thunder Road” and a later rendition of “Born to Run” are presented as if they were numbers in a joyous stage musical, and it just lifts your spirits in a way few things can. The film at times has a distinctly 80s look to match its setting, and it only aids in the experience.

As a Bruce fan, his music feels like to me like it does to Javed. I saw Bruce in 2012 in Albany, NY. He opened with “Badlands,” and scattered several more of his hits throughout the three-hour show while also promoting his superb “Wrecking Ball” album (fuck you, Miley Cyrus, this is the only “Wrecking Ball” whose existence I recognize). The two friends I went with, both of whom had seen multiple Springsteen shows, told me it would a rare treat if he played my favorite of his songs, “Thunder Road.” (imagine my glee at seeing it in the movie) He did play it, and it was glorious. Again, I’m not religious, but if I have a soul, it was shaken to its core that night, in the best way possible.

So yes, I saw a lot of myself in Javed, and not just because I was an equally awkward teenager. Bruce’s music speaks to people like me who come from modest means, whose parents sacrificed everything to give us a shot at a better life, who grew up in poor neighborhoods, who tried to seize every opportunity to escape the mundanities of life. He’s one of just a few artists (Aretha Franlin, Billy Joel, Green Day, Elton John and some others) whose lyrics speak directly to my experience. Some are universally relatable, some aren’t.

I’ve racked my brain since I’ve seen this film to try to figure out if there’s a more modern musician who can lay claim to such powerful influence. I’m not talking about a rabid fanbase, because several performers have that across generations, even if their music doesn’t particularly say anything, from the Grateful Dead to Beyoncé. I mean the type of artist who can transcend genre and speak to marginalized and disenfranchised sectors of the populace. The best I can come up with is Lady Gaga, who has made her career out of making young people (particularly the socially awkward and the LGBTQ community) feel their own self-worth and express themselves without fear of reprisal. I’m not the biggest fan of her music (the early stuff was too poppy for me, but some of the newer stuff is really good), but I can certainly recognize that she has the once-in-a-generation talent and influence that someone like Bruce has, and I hope she continues to be just as positive of an influence 30 years from now as Bruce is.

While Blinded by the Light isn’t a perfect movie, it is certainly very good, because it frames the familiar coming-of-age story through the lens of transformative music. Hopefully you’re a fan of Springsteen’s work, but even if you’re not, I think the casual viewer can appreciate the context and still enjoy this film on a deeply personal level. It’s a resonant, relevant bit of cinema that offers some rarely found good feelings amidst a world of negativity, and shows that music can once again be a unifying language.

Join the conversation in the comments below! What film should I review next? What’s your favorite Springsteen song? Have you ever invoked song lyrics to clap back at some assholes? Let me know!

3 thoughts on “Tramps Like Us – Blinded by the Light”