It is a rare thing that I get to see any national submissions for Best International Feature Film (formerly Foreign Language) before the Academy narrows the dozens of films down to the shortlist, and oftentimes I have to wait until the actual Oscar nominations come out and scramble. It’s usually one of the last categories – if not the last – that I’m able to finish during my annual Blitz, if I’m able to finish it at all. So imagine my surprise and sense of accomplishment that I’ve now knocked three films off the list, the latest being Spain’s submission, Pain and Glory, written and directed by Spanish master Pedro Almodóvar. The film screened at the Cannes Film Festival, where it competed for the Palme d’Or (won by Bong Joon-ho’s Parasite), and won for Best Soundtrack and Best Actor for Antonio Banderas. I think we’re in for a great competition in the International category this year, as all three films I’ve seen so far have had great things to recommend, and audiences are actually getting a chance to see these works in wide releases for once, they’re that good.

Over the course of his 30+ year career, Almodóvar has created some of Spain’s finest films, including Women on the Verge of a Nervous Breakdown, All About My Mother (winner of the Foreign Language Oscar), Talk to Her (Oscar for Original Screenplay), and Volver (Best Actress nomination for Penélope Cruz). This film represents Almodóvar at his most autobiographical, with longtime friend and collaborator Banderas as his avatar, and it works to mostly great effect.

As Salvador Mallo, Banderas takes stock of a lifetime of filmmaking achievement, reflecting on the inspirations and experiences that shaped Almodóvar’s worldview as an artist. Through narration, time jumps, and some trippy sequences within and outside drug abuse, Banderas as Mallo as Almodóvar conveys a panoply of malaise, ennui, and hope filtered through the tragedy of missed opportunities and lost love.

In modern day Madrid, Mallo is in the middle of a creative crisis, lacking any motivation to write or direct. His first classic film, called Sabor (Flavor), has been restored and re-released to appreciative audiences. He is asked to reconcile with the lead actor from the film, Alberto Crespo (Asier Etxeandia), with whom he had a falling out during production, and to whom hasn’t spoken in over 30 years. The public appearance fails on multiple levels, as old wounds are opened up, but also because Crespo has introduced Mallo to heroin, and the effects show quickly.

While in stupor, Mallo reminisces about his childhood, and how his mother (Cruz as a young woman, Julieta Serrano as an elder) sacrificed much of her happiness and what few comforts she had so that he could get an education and live a life outside of abject squalor. He joins the choir at a Catholic boarding school and quickly rises through artistic society due to his talents, but he resents being away from home, as well as the indoctrination of the Church. 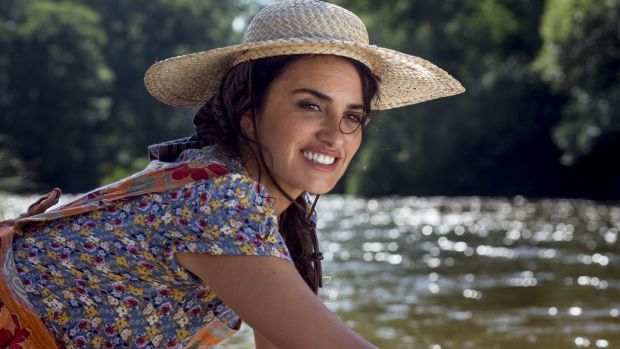 When he is able to live at home in the summer (a whitewashed cave apartment in a small village), he teaches a local laborer how to read and write, as literacy is not common among poverty-stricken people in mid-20th century rural Spain. The young man’s physique kindles Mallo’s first homosexual desires, as well as his appreciation for art, as the laborer is an amateur painter.

Scrolling through Mallo’s computer, Crespo comes across a monologue about addiction and the pain of ending a relationship because he can’t help his lover overcome his issues. Crespo begs for the right to perform it as a one-man show, to which Mallo eventually agrees. By coincidence, the former lover about whom the monologue is based (Leonardo Sbaraglia) happens to be in the audience, leading to another reunion and reconciliation with Mallo.

A lot of the proceedings are directly tied to Almodóvar’s personal and professional life. Not only is Antonio Banderas basically his stand-in (and it’s a powerful performance at that), but scenes shot in Mallo’s home are in Almodóvar’s actual Madrid apartment. The feud between Mallo and Crespo mirrors a professional separation that took place between Almodóvar and Banderas in the 90s, though for the film it’s fictionalized to legitimize the worst rumors about their time apart. The first desires as a child and the adult relationships he’s lost are based on Almodóvar coming to terms with his own sexuality over the course of his life.

Structurally, the film is a bit scattered, almost like stream of consciousness. The flashbacks and tangents come at random intervals, and aren’t always germane to the actual plot, which is fairly straightforward. For example, after explaining how his singing skills got him exempted from many school classes, Mallo narrates that he still learned a lot about geography from professional travel and anatomy from his myriad medical issues, a sequence that’s delightfully animated in the style of a PBS children’s show. But we never return to that motif, and the lessons learned from them are never referenced again. At times the film plays like an alternate version of Cinema Paradiso. Other times it’s oddly self-aware, like a late scene where Mallo dismisses the idea of tracking down an old acquaintance because too many coincidental reunions would come off as cliché.

Despite all that, this is a deeply personal and introspective film for Almodóvar, led by a strong performance from Antonio Banderas bearing his soul on Almodóvar’s behalf. It’s amazing how much the filmmaker lets the audience in to see the paths his life has taken, and I felt his struggle as if it were my own. As Mallo notes to Crespo, crying is such a Hollywood thing. The true emotional strength of an actor is being able to hold back the tears, but still get the audience to feel your pain. He’s certainly succeeded in that respect.

Join the conversation in the comments below! What film should I review next? How has cinema touched your life? If the rain in Spain stays mainly in the plain, what happens if you live in a cave with an exposed ceiling? Let me know!

2 thoughts on “Pedro Votes for Himself – Pain and Gain”