Editing is more than just piecing all the various shots together. It’s about incorporating video, sound, special effects, music, and color into one seamless whole. Whatever disparate elements go in to a production, it all comes together in the edit room. I know this first-hand, as I’ve done professional edit work since 2006, mostly in sports (ESPN and Fox). Of all the technical fields, it’s the closest to being a true filmmaker, because it is up to the editor to make sure the visual story is told properly. Sadly, this also means the editor is the first one blamed when something doesn’t look right. If the video lags, or if there’s an unjustified jump cut, or an effect hasn’t rendered properly, it’s all on the editor, as he or she is the first line of defense.

It’s hard, tiring work, which is why the stuff I do now is basic as fuck. I went through a lot of long, stressful years in this craft, and came to the realization that while I had the skills, I didn’t have the drive for it. I do it now to subsidize my main income, or tide myself over between gigs. There is creativity to be had, and even some fun, when you’re not on someone else’s timetable or under someone else’s thumb, which is why I have more sympathy for the hard workers in this field than any of the other technical fields. I hate on a lot of stuff, mostly in jest, but if there was ever a case for, “Hey, lay off, these people put in a lot of hours, even if the movie is crap, so go easy,” it’s for the editors.

Thankfully, I don’t have to worry about any lack of quality with this year’s nominees. All five are among the 10 features nominated by the ACE editors’ union for their annual “Eddie” Awards, to be handed out on Friday. That result will help predict the winner here, but again, all are worthy, and all for their own reasons. While I’ll still rank the contenders at the end, really this is a slate of movies where the edits range from A to A-.

This year’s nominees for achievement in Film Editing are…

McCusker is no stranger to the awards circuit, as he was previously nominated for Walk the Line (he won the Eddie for his work on that film as well), and takes a personal passion for editing, which he describes as “a dance of the eyes.” When you watch Ford v Ferrari, it’s hard to argue, because between the sound, cinematography, and editing, a lot of the fun of the movie is seeing the Le Mans race play out like a turbo-charged ballet.

The camera swings in different directions all around the cars, which is where Buckland and McCusker come in. A lot of the views we get, from so many angles around the vehicles topping out at more than 200 MPH, are impossible to capture with a normal film camera mounted on another car. As such, a lot of visual effects and CGI were used to supplement, and it’s up to the editors to make that look as natural as possible. They very much did.

Another well-seasoned veteran, Schoonmaker has been Martin Scorsese’s go-to editor for the last 40 years, and has won three Oscars in her illustrious career, most recently for The Departed. It’s those skills in navigating back and forth along a non-linear storyline that serves her well in The Irishman, as the plot jumps back and forth over the course of decades.

For much of the film, Schoonmaker’s deft touch helps to give a true impression that we’re watching a story being told by an old man taking stock of his life, as Robert De Niro does from his nursing home. The tale is meandering and at times goes off on tangents, but he and Schoonmaker always bring it back before things get out of hand.

The one exception is the ending, which goes into Lord of the Rings territory and can’t quite figure out how it wants to end. That’s not entirely on her, because it’s Scorsese who has the final say, but presenting each potential ending with the earmarks of bringing everything to a close (long shots, fade outs, etc.) gives us, I think, one too many fake-outs. Still, I’m not about to truly dock a film that was brilliantly assembled for three hours and twenty-seven minutes when the last three aren’t as great.

There are two major elements at play when it comes to Jojo Rabbit‘s edit, but both serve the same purpose. In order to make the comedy and the satire land in the best moments, you have to be able to play with the speed of the film, as well as make cuts at just the right spots to drive home a punch line. Visually, you have to sell the jokes through exaggeration and quick surprises.

There are two moments that exemplify this from Tom Eagles. The first is early in the film, when Jojo tries to prove himself to the other youths at his indoctrination camp. He runs with a grenade in hand, imaginary Hitler alongside him. As he runs through a literal minefield, the action slows and quickens at differing points, highlighting the hectic nature of Jojo’s insane scheme for acceptance. Then, in his moment of triumph, he throws the grenade, only for it to ricochet, hit him, land back at his feet, and explode, sending him flying. There are a bunch of well-timed cuts to make this joke work on a visual level.

Similarly, one of my favorite gags of the entire film involves a standard trick, the cutaway. Sam Rockwell talks quite calmly to Alfie Allen, clarifying an order he had previously given off-screen, for German Shepherds. In a calm but exasperated tone, he says that he meant dogs, not actual German men who happen to tend sheep. The wordplay alone is an adequate joke. The instant smash cut to a line of shepherds, even when you know it’s coming, is still hysterical. That’s an editor’s hand at work. 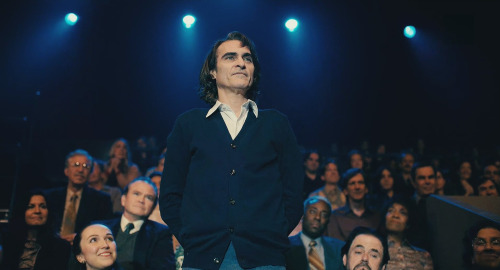 The trick with a film like Joker is to keep the edit itself clean while still giving the audience a visual representation of the main character’s growing madness. A lot of this is accomplished via a series of high-intensity smash cuts at crucial moments, particularly when Arthur Fleck is getting beaten senseless at the beginning of the film, and again on the train when he finally starts taking revenge. The cuts, coupled with some adjustments in focus, show the mental torment he goes through, and is finished off beautifully at most points with an unaltered, straight shot for the matter-of-fact brutality that Arthur eventually doles out.

Similarly worth mentioning is a clever bit of stylistic crossing. Since a lot of Arthur’s ambition stems from his love of stand-up comedy and his hero worship of late night TV host Murray Franklin, Groth occasionally has to pull double duty, editing both in a cinematic style and a television style. I can’t quite tell if he matches the frame rate (24 frames per second for film, 30 for TV), but speaking from experience, I certainly felt like I was watching TV in those relevant moments instead of watching a TV screen on a film. It’s subtle, but it’s a nice touch, particularly in Arthur’s dream sequence where he talks to Murray from the studio audience.

The editing scheme for Parasite has two major points of focus. The first is juxtaposition. For most of the first half of the film, it plays like a class warfare satire combined with a slick heist movie. As such, there’s a lot of contradictory, yet parallel cuts in the action to display literally how the “other half” lives at all times.

The second is a heavy dose of what I like to call the “Telephone Game,” where information travels from one person to another via the editing. As the Kim family hatches their scheme, their highly-coordinated spread of info (incriminating photos, shared backstories, etc.) is a journey we take with them via the information superhighway, constantly cutting from one family member to another as they play their individual parts.

For the back half of the film, where things take their sinister turn and the film morphs into more of a suspenseful thriller, those very same tactics get turned against us in the audience, with the planning of Da-song’s impromptu birthday party using the same technique, but it’s stretched out just a little bit longer, both to show the Kims’ fatigue and exasperation, but also to build tension for those of us watching, wondering if they can get away with pulling off this event without the basement-dwellers being discovered. It’s absolutely masterful.

Next up: Quiet on the set! Literally, cause there’s a guy with a sound board trying to create a balance over there! It’s Sound Mixing!

Join the conversation in the comments below! What would your rankings be? Have you ever tried your hand at editing? Will smash cut jokes ever not be funny? Let me know!