Every year I feel like I have to explain the difference between Sound Editing and Sound Mixing, and why the categories have near-identical nominees. The simple TL;DR is that Editing happens in post, while Mixing happens live on set in most cases. The slightly deeper dive is to say that Editing is much more about creating and incorporating sound effects into the post-production process, while Mixing – which can also be balanced in post – is much more about creating the overall sound profile of a film. This requires strategic microphone placement, properly recording dialogue, and creating a balance with any ambient sounds and sound effects in a live shot.

For the most part, the sound mixer is part of the on-set crew. If you ever get a look at a behind-the-scenes shot of a film, there’s usually an operator off to the side next to an enormous board full of knobs and levers. That’s the Mixer. The sound effects Editor might never appear on stage, unless it’s to take notes, or to create sound cues using rudimentary effects for the benefit of the actors. For example, someone may answer a knock on the door. There will at times be a sound Editor on location to either cue someone to knock on the door, or he’ll create a knocking noise completely off to the side, which the actor will then react to. That noise will not make the final cut of the film, but instead be overdubbed and replaced by a Foley artist in post. It should also be noted that while they have separate jobs, the Mixers and Editors often work in tandem to create the overall sound quality.

This year, like most years, we have two Sound categories with nearly identical nominee lists. Often, this can be used as a reason to write off one candidate in each field, though don’t necessarily default to it, as there have been odd cases where the outlier film won its category, though if memory serves one of the common nominees scores at least one victory each year. For our class this year, the outlier makes perfect sense within the context of its film and the needs of that particular production, and I wouldn’t be surprised if it took down the victory. That said, this is a field full of heavyweights, with the four common nominees all being up for Best Picture. Victories in the Sound categories may augur well for the films trying to build their résumés for the top prize.

This year’s nominees in Sound Mixing are…

As the old tagline for Alien goes, “In space, no one can hear you scream.” That’s because there is no atmosphere or air in space for sound waves to travel on. As such, any proper spacefaring film has to acknowledge the deafening silence of the vacuum.

Throughout much of Ad Astra, this bit of scientific verisimilitude is on full display, particularly during the chase with pirates on the Moon. Our natural satellite has a very thin atmosphere, so the mix includes a little bit of ambient sound during the pursuit, including the crashes, but it’s tempered so that much of the noise is from within the space helmets of Brad Pitt and his escorts. We get a realistic balance of what we might hear if we were on the scene and on communicator with the other astronauts.

Similarly, the film takes great advantage of its multiple settings to create a believable cacophony of noises combined with the dialogue in each major set piece. Pitt falling off the space elevator in the opening sequence includes a massive wind tunnel effect. The launchpad on Mars is given a hollowed out approach as the engines fire. Life on the various spacecraft is only as loud as is absolutely necessary. Here’s a spoiler for you – auto racing is LOUD! But we can’t just have loudness for the flick, because we wouldn’t be able to hear anybody say anything. That’s where the mixing team comes in for Ford v Ferrari. Whenever the cars are on the track, if we’re looking from the outside, it’s all engines. But inside the vehicles, we get a low-register rumble, almost like a music bed, to accompany Christian Bale’s excited commentary.

But it goes beyond just the racing. When the Ford team is building the cars at LAX, they’re working in an active shop where a litany of tools are hard at work making various noises. The cast has to be able to speak above that din on a near-constant basis, and they have to be able to raise and lower their voices mid-conversation as the situation changes. That adds a degree of difficulty for the mixers, because they need to be adjusting volume on the fly with the microphones as well, creating a balance that incorporates all these disparate noises without sounding too compressed (a trick with background noise so that it’s present, but not overbearing), because it would sound odd for, say, a blowtorch to get a higher pitched sound as a flame burns more intently, but not actually get any louder in relation to anything else. All of that requires an attentive, almost surgical approach to the mixing board. 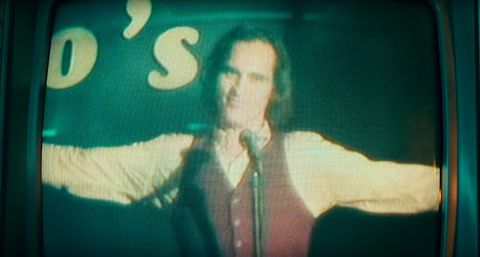 The crux of the live sound mix for Joker lies in the performances of the media personalities. Between Arthur Fleck and Murray Franklin, a significant portion of the film takes place in, on, or around stages and television studios. Each of these environments requires a different design of microphone and pattern of placement. You also have to make sure the transition from internal to external environments isn’t too jarring.

The best example of all this I can give is when Arthur and his mother watch Murray on TV. Those scenes had to be independently shot, mixed, and played on the television screens in the apartment setting, which requires a lot of back and forth between a live stage and a recording of it. The balance has to be seamless to make sure we can hear everything Murray says (albeit in a hollow, CRT TV speaker design), as well as Arthur and his mother live in the room. It’s not as flashy a task as some of the other entries, but an essential one, nonetheless. When a whole bunch of shit is blowing up around you and you’re constantly getting shot at, the most important thing to remember is, “Did you catch what he just said?” That’s the prevailing mantra for the mixing team on Sam Mendes’ war epic. It may sound like I’m being crass and/or dismissive, but I assure you I’m not. This really is what the entire design boils down to, and while it may seem simplistic, it’s one of the biggest challenges of this set.

It’s not just that there are a lot of gunshots and explosions, it’s that they’re all happening at once in real time. Because of the one-shot gimmick, there are very few spots to make a cut, so many scenes are drawn out for several seconds, if not minutes. That requires a highly coordinated and choreographed sequence of character movements, dialogue, background actors, and live pyrotechnics. The sound effects editors will handle a lot of the sounds those explosions make in post, but the mixer has to account for them live and in the moment, making sure that everything we need to hear in the foreground isn’t drowned out by the pops going on everywhere else. It’s a difficult task in a normal production, and nearly monumental in one like 1917.

Once Upon a Time… In Hollywood – Michael Minkler, Christian P. Minkler, and Mark Ulano 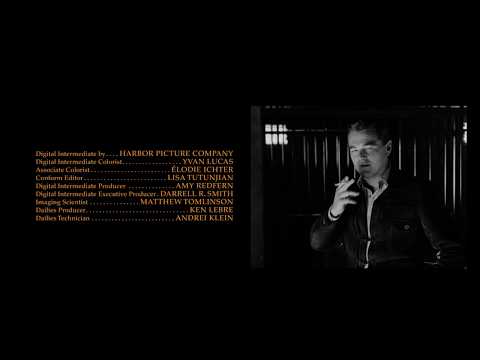 For Quentin Tarantino’s latest opus, the mix comes chiefly from the multitude of different filming locations, each requiring a different mix and balance. Similar to Joker, we have scenes on television and on active production studios, including backlots. Also, Tarantino has a penchant for people talking in cars, so there’s got to be a balance of dialogue, music, and ambient traffic, not to mention any sounds the cars themselves might make. Add in houses, restaurants, bars, planes, and movie theatres, and there’s practically no end to the design schemes that have to be laid out for any given scene.

The sheer quantity of different locations amounts to quite the undertaking for the mixing team, including Mark Ulano with his second nomination in this year’s category. I think for me, the best example of the work put out by Mark and the Minklers (sounds like a cool 60s band, perfect for the film) actually takes place during the credits, where Leonardo DiCaprio does an ad for Red Apple Cigarettes. Not only is it a quintessential Tarantino moment for the fans, but it incorporates all the necessary elements for a good mix. There’s distortion, live set (off-camera) sound effects, a change in the timbre of Rick Dalton’s speech, the drag of the cigarette, and what I’m sure is a continuity in-joke as the spot cuts to a scene of Rick riding a horse with sound, then to him standing next to a building without it.

Next up: Turn on, toon in, but don’t drop out! It’s Animated Feature!

Join the conversation in the comments below! How would you rank this field? Do you hear what I hear? No, literally, I’m getting older and I’m genuinely concerned! Let me know!