Costume Design has been for the longest time a category all but reserved for period pieces. No matter the quality of whatever movie is put forward, for the better part of the last 70 years, if there’s a movie that’s set at least 50 years in the past, odds are it’s going to get nominated for this award. There’s almost a correlation between how far back you go and how likely you are to win. In the 90s, for example, Priscilla, Queen of the Desert was the only winner that could reasonably be considered as being set in “modern” times. In the 00s, the closest you get to contemporary is The Aviator.

But over the last few years, the trend has been somewhat bucked. Of the last four winners, only Phantom Thread follows the usual pattern of “classical” attire. The other three winners have been genre fantasy films, which lends some credence to the idea that expansion of the Academy’s membership has paved the way for more diverse talent.

I say this because it was something of a minor controversy that last year’s winner, Ruth E. Carter (Black Panther) was not nominated this year despite her tremendous work on Dolemite is My Name. The costuming was a huge part of the movie’s feel and appeal, but sadly, she was left off. Given this year’s nominees, I would vote for Carter again in a heartbeat, but I plead with people not to be discouraged or succumb to knee-jerk reactions of racism or what have you. Yes, it sucks that Carter wasn’t nominated, because she’d probably win again. But we have entered a new era where Renaissance and Victorian-era dresses are no longer the default. Let’s be happy about that.

This year’s nominees for Costume Design are:

I think more than any other category, Costume Design gets the most repeat nominees and winners. Case in point, Sandy Powell, who’s been nominated 15 times, including twice last year. She has three wins to her name, most recently for 2009’s The Young Victoria. She’s also a frequent collaborator with Martin Scorsese, having worked previously on Gangs of New York, The Aviator (one of her three wins), and Hugo.

For The Irishman, she excels when it comes to bespoke suits. Throughout the decades that the story runs, basically every man, from mook to mobster and everything in between, is immaculately dressed in sleek suits whose color fits the mood of a given scene. Where I think things falter a little bit is in the more casual moments, like the bowling alley scene. The shirts that Robert De Niro and Joe Pesci wear are era-appropriate, but they just look goofy as fuck. And in a scene that’s meant to be very poignant, as it plants the seeds of the eventual estrangement between De Niro and his daughter, I just couldn’t get over how odd they looked. 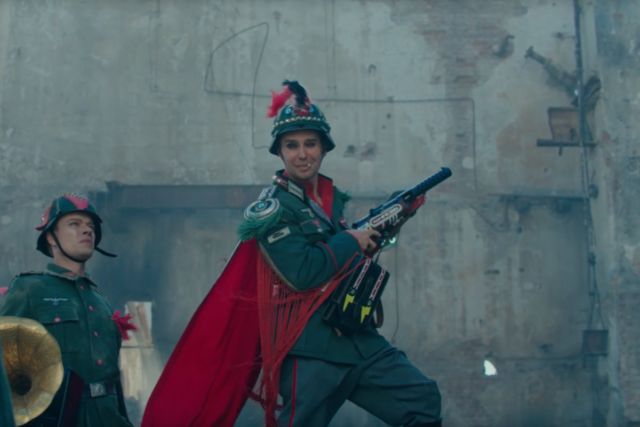 This is the first nomination for Rubeo, but she’s got an impressive list of credits. Over the last 25 years she’s made her bones with work on Avatar, Apocalypto, World War Z, and Thor: Ragnarok. Really, this is likely the most traditional work she’s ever done, staying in well-known capacities like military uniforms and early 20th century civilian clothing.

There are two really strong points for Rubeo’s work in Jojo Rabbit, and it centers on our two non-imaginary leads. Jojo’s Hitler Youth uniform is a spectacular blend of the fear-inducing fatigues of the SS and the scrappy innocence of a Boy Scout uniform. It 100% gets the point across that no matter how committed Jojo is to the Third Reich in his mind, he’s still just a little boy. Similarly, Scarlett Johansson’s entire wardrobe serves as the one bit of true brightness in the shroud of darkness that is Nazi Germany. Her clothes are as bright and exuberant as her character, making her stand out for all the right reasons, and considering her fate in the film, all the wrong ones.

Also, bonus points for Sam Rockwell’s regalia before his capture in the film’s climax. It perfectly serves his character, who yearned for glory, to meet his end looking as absurd as a military leader can. Modern dictators could take a lesson. 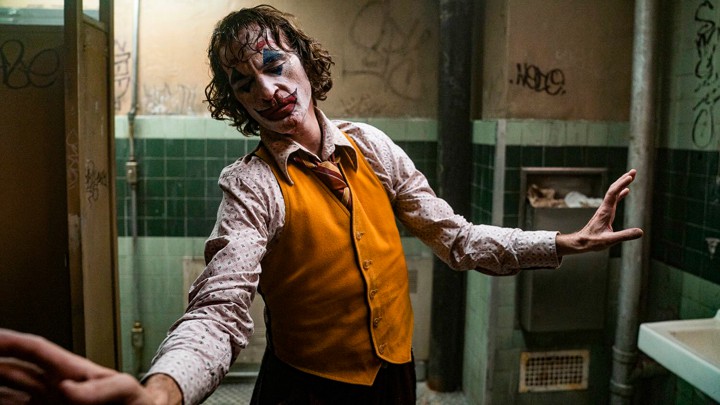 Another multiple award-winner, Mark Bridges has two Oscar wins from three nominations to this point, getting a nod for Inherent Vice and winning for The Artist and Phantom Thread. This is his first major project working with Todd Phillips (he’s a frequent collaborator with Paul Thomas Anderson), but it’s not the first time he’s dressed Joaquin Phoenix, as they worked together on The Master a few years back. He definitely knows how to bring out the best in Phoenix by playing to the physicality of his acting style, giving him clothes that allow for a lot of movement.

And really, this nomination is all about Phoenix. While the costuming of the rest of the cast is adequate (I rather liked the suits Robert De Niro wore as Murray Franklin), Arthur Fleck is meant to be conspicuous from the very first moment he’s on screen. Even when he’s not dolled up as a clown, his clothes carry bright, clashing colors designed to make him stick out. It’s not just because he’s the focal point character for us in the audience, he also has to be a sore thumb to everyone around him, a disturbance even in normal, civilized company, which sadly is part of what draws people to hurt him. No matter the scene, his costuming is designed to make him the center of attention, which is kind of what the character always wanted to be anyway.

When it comes to the traditional default of old timey dresses in this category, one of the heavyweights is Jacqueline Durran. She’s on her seventh Oscar nomination this year, all but two of which were for work that falls into that classic oeuvre. Her lone win also meets the criterion, the 2012 adaptation of Anna Karenina. Under normal circumstances, I’d be the first to write this nomination off, as the dresses have been done to death. But when it comes to Little Women, Durran’s work is just off the charts.

In line with Greta Gerwig’s overall motif of finding the joy even in the most tragic of consequence, Durran’s costuming serves as one of the best visual highlights. When Emma Watson’s Meg goes to the debutante ball wearing a bright, pink gown, she looks more the belle than when she actually played Belle (Durran was also nominated for the otherwise awful Beauty and the Beast remake).

Further, each of the main characters have costume designs that reflect their character. Meg is dignified and graceful whether she’s wearing a formal gown or a working dress. Amy is decked in light, bright colors, illustrating her naïveté. Beth’s colors are more muted, a hint at her general shyness and tragic fate. Tomboy Jo wears delightful combinations of shirts, pants, dresses, hats, scarves, you name it, a symbol of her unpredictable, fiery nature. Even Laurie wears posh clothes that hang just a bit too loosely, a visual note to his rebellious (for the era) nature.

Normally I’m loathe to endorse the old standard of period dress, but really, it’s hard to argue against the beauty and sheer volume of work that Durran has put out for this film. And given the backlash against the Academy for Greta Gerwig not being nominated for Best Director, look for this as one of a few opportunities to rebuke the Directors Branch by giving the film a win.

Once Upon a Time… In Hollywood – Arianne Phillips The last of our Murderer’s Row of designers is Arianne Phillips, now on her third nomination, after Walk the Line and W.E. Like Durran, part of the reason Phillips is on this slate is just for the sheer amount of costumes she had to design, and for the multitude of purposes she had to make them. For Leonardo DiCaprio alone you have his costuming on and off set, which means pulling double duty between period pieces in the 1960s and the 1880s. And of course, the Hawaiian shirt and jeans combo worn by Brad Pitt throughout is almost an emblem of the film itself at this point.

And then, you have Margot Robbie as Sharon Tate. A young actress at the height of her fame, Tate was a huge part of the 60s celebrity scene, which meant an absolute litany of stylish clothes and dresses. Whether she’s going to swinging Hollywood parties in high-end attire, or just strolling along in a simple black turtleneck with a white skirt, Phillips makes sure that Tate looks like an absolute icon of 60s fashion.

My Rankings
1. Little Women
2. Once Upon a Time… In Hollywood
3. Jojo Rabbit
4. Joker
5. The Irishman

Next up: Warm up your pipes. It’s Original Song!

Join the conversation in the comments below! Which of these nominees is your favorite? Do you think Ruth Carter should have been nominated? Which outfit would you most like to wear? Let me know!