One of the first categories I broke down in this year’s Blitz was Sound Mixing. So why, you may ask, did I then wait until the final week to do its counterpart, Sound Editing? Simple, really. I wanted to truly get some separation between the two fields – which as usual are 80% identical – and clear my mind of all head space regarding movie audio (both Foley and Music) so I can go in as fresh as possible.

The Sound Editing, or Foley Art, is the post-production process of inserting sound effects into the finished film. Whether it’s a simple task of enhancing a fist fight with some impact sounds that make it just a little more intense, a complex amalgamation of several noises to create now-iconic sounds like blaster fire and dinosaur roars, or any number of duties in between, the work is tiring, thankless, and largely ignored by movie audiences. Part of that is by design. While just about every scene in a film has been affected with new audio, most of the time the only way you’ll notice it is if something’s amiss. Just like the quality of sound itself, the best sound jobs are the ones you don’t see.

Of course, that’s not my job here. My purpose is to highlight, not just the effects themselves, but the professionals who spent hours poring over every relevant moment of the nominated films to make sure you heard exactly what you were supposed to. For our five nominees, there are basically three groups. Two films had the task of giving the audience as realistic a sound profile as possible, so that it feels like we’re in the moment. For two others, the best bits highlight moments of extreme violence. For the fifth, it’s all about the culmination of decades of experience into one last taste of what we’ve all loved for as long as we can remember.

This year’s nominees for Sound Editing are:

With a climactic event like the Le Mans race, a lot of the film has to build up a sense of reality in the fast-paced world of motorsports. Engines have to sound real as they rev and dip. Crashes have to crunch just right to make it feel like you’re in the stands watching. Wheels have to spin. And because we’re talking racing, it all has to be LOUD, but not so loud as to hurt the audience’s collective ears or drown out the dialogue.

For my part, the best sound effects were literally car adjacent. Specifically, during the Le Mans race (and the Daytona race that proceeds it), the thrill is in the displacement of air as Ken Miles passes other cars. It’s not always blatantly on the surface, but rather simmering just underneath the engines switching gears and the sounds of Miles working the levers and instruments inside the vehicles. But whenever one car passes another, there’s a noticeable pop followed by a smooth fade-out that accompanies the visual of the car speeding away. That is the aerodynamics at work, as Miles’ car is literally slicing through thick air and cutting wind resistance to gain just a little more speed.

This is the 10th nomination for Murray (he has two wins, for Letters from Iwo Jima and American Sniper), making him the most nominated sound editor in history. Kudos, sir! While the sound effects are great throughout the film, they’re mostly pedestrian. Normal sounds that accompany normal scenery for the most part, not that there’s anything wrong with that.

However, whenever we have our moments of extreme violence, the sound effects are an essential part of the equation. The gunshots in the subway train have to fit the acoustics of a subway train. When Arthur brutally murders the former co-worker who sold him out, the gore has to be matched with appropriately grotesque audio. And while it’s not exactly accurate to what really happens in a hospital, the moment Arthur smothers his mom gets a nice audio touch with her heart monitor simply stopping its beeping once she’s dead, rather than giving us the flatline tone. 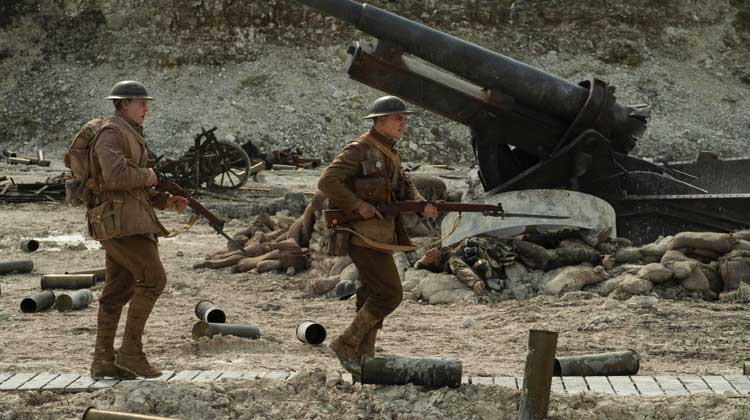 It’s a war movie. There has to be war noises. Explosions, gunshots, planes crashing, engines, flames. Whatever you can think of audiowise in a warzone, it’s in this film. Tarney and Tate do an admirable job of putting the aural fog of war right in our faces.

Where I will dock slightly though is in the presentation of new twists and characters. I think I mentioned this when I went over Cinematography, but one of the few things that genuinely bothered me about 1917 is how quickly the scenery changes from one sequence to the other, even though this is supposed to represent a single shot. This problem spills over into the sound edit as well, because the introduction of new sequences seems intentionally designed to give you no hint as to what’s coming, even if it defies logic.

When Schofield gets picked up briefly by a transport, he’s surprised by the arrival on scene of two officers. It’s a surprise to us as well, because we didn’t hear them approach, nor did we hear the three quite loud transport vehicles. Surely something should have tipped Schofield off, and us by extension, but the scenes are intentionally left without any sound effects to signal the arrivals. It’s like in Jurassic Park movies where it’s seemingly at the whim of the director as to when people can and cannot hear dinosaurs approaching. In one scene the T-Rex’s footsteps are so heavy and loud that it shakes the ground and makes that cool splash shot in the water cup. Yet at the film’s climax, no one heard the T-Rex enter the Visitor’s Center to dispatch the two raptors chasing our heroes. So, can people hear dinosaurs approaching or not? Same goes here. When it’s convenient for dramatic effect, the logical background noises that would cue the next sequence are left out, seemingly on purpose, begging the question of whether or not Schofield can hear a truck a mere 10 feet away in an open field.

Once Upon a Time… In Hollywood – Wylie Stateman

Like Joker, the design on the sound effects is most noticeable when it comes to instances of violence. Unlike Joker, however, there’s a lot more violence to go around, and it’s not always murderous gore.

The most famous scenes of this type involve Brad Pitt. When one of the Manson family slashes his tires, good ol’ Cliff Booth beats the ever-loving shit out of him. When challenged by Bruce Lee, he throws him into the side of a fucking car. When would-be assassins come to the wrong house, he’s high as balls, but still dishes out the harshness. Hell, his moment of sheer infamy is the death of his wife in what may or may not have been an accidental harpooning with a spear gun. The little DOINK sound as it’s fired is in itself a delight.

In addition, being a self-reflexive film, there are plenty of opportunities to contrast different sound effects depending on the context inside and outside of the Hollywood production system. The best example of this is the film footage of Leonardo DiCaprio’s Rick Dalton using a blowtorch on Nazis, and then using that same blowtorch to incinerate one of his intruders. Even though it’s the same weapon, because one scene is in a movie and the other is “real life,” the two moments have different sound effects and different sound quality. It’s fucking brilliant. To this day it blows my mind that the blaster sounds in Star Wars are just a wrench hitting a metal wire and then being slightly sped up, or that R2-D2 means “Reel 2, Dialogue Track 2,” which came from a sound editor. Basically, Star Wars wouldn’t be the same without its trademark sounds, many of which were created out of the blue for this franchise.

For what we all hope is the final installment of the series, the sound effects play just as big a role as they ever have. In addition to all the classic pew pew pews and lightsaber swooshes, we get new characters with distinctive sounds, like Babu Frik and the droid D-O.

No matter how absurd the Star Wars films looked during the prequels, or how rushed the storytelling was in the new trilogy, the one constant has always been the ability to close your eyes and still understand everything going on thanks to the quality of the sound. No better is this exemplified, I think, than during Kylo Ren and Rey’s lightsaber duel on the ruins of the Death Star. The next time you see it (because come on, if you’re a Star Wars fan, you’ll watch it a dozen times or more before you tire of it, even if you hated it), close your eyes and just listen to that scene. Hear the waves crash on the side of the metal platform. Hear the clash of the lightsabers, with rain and seawater sizzling on them ever so slightly. Listen to the dialogue as it hovers just above the din, especially when Kylo seems like he’s out of the fight. The whole sequence is a combination of sounds so fluid that one can honestly argue that it’s better than the actual visuals of the moment, and that’s saying something.

Next up: Oh yes, it’s Ladies Night, and the feeling’s right! It’s time for Best Actress!

Join the conversation in the comments below! How would you rank the nominees? Is nostalgia for a galaxy far far away enough to elevate a film to a win? Seriously how awesome is that blowtorch? Let me know!