Jane Austen’s novel, “Emma,” has been adapted four times for the big screen. In 1996, a straight-up version gave Gwyneth Paltrow one of her first leading roles, and won the Oscar for Original Score. In 2010, India gave us Aisha, which was a modest success overseas. Of course, the first, and most famous version of the story on film is 1995’s Clueless, which made a star out of Alicia Silverstone and is arguably the most quintessentially 90s movie in existence.

But all of those films had one major problem, and that is that they are very much solitary capsules. Clueless is of its time. Aisha is of its place. The 1996 Emma is of its star. All of those movies have their qualities, but there has yet to be a universally accessible version of the classic novel. Until now, that is.

Directed by Autumn de Wilde – previously known for photography and music videos – the new version, dubbed Emma., is a grandiose effort that seeks to last beyond borders, beyond the cast, and beyond its own era. Obviously, it’s way too early to cast this version into the pantheon of Jane Austen adaptations, but more than any other, this film has the ambition to become timeless, and serves as the first truly great film of 2020.

There are basically two main elements that make this film work as well as it does. First and foremost is the cast. Led by Anya Taylor-Joy, the entire ensemble has a natural chemistry and play off each other admirably. But more importantly, every single actor finds a way to make their characters individually distinct. Obviously, Taylor-Joy does a lot of heavy lifting as Emma Woodhouse, the 19th Century yenta convinced of her ability to not only read people, but find their perfect match, no matter how much she protests that she doesn’t want to do it, nor has she any desire for romance of her own. Of course, that doesn’t stop her from taking young Harriet Smith under her wing, showing her the ropes of the landed gentry, as well as gleefully pulling the strings behind Harriet’s entire life. Her large, expressive eyes tell worlds’ worth of stories as she coyly observes her peers, and at times manipulates them in just the right way. Other times, the manipulation comes courtesy of her large, expressive bosom, the slightly naughty nature of which Taylor-Joy leans into just enough to let us know she’s in on the ribald joke despite the film’s PG rating.

Apart from her, the supporting cast does wonders. Rupert Graves (Sherlock) and Gemma Whelan (Game of Thrones) make for a delightfully sophist couple. Mia Goth, fresh from the fuck box of High Life, is a giddy delight as the naïve Harriet. Johnny Flynn plays a stridently confident George Knightley who balances out his prestige with a deft touch of human empathy. Miranda Hart (Call the Midwife) plays Miss Bates with the exact degree of annoyance needed to make Emma seem almost justified in her insult to her towards the film’s climax, but just sympathetic enough to know she really doesn’t deserve it.

But topping them all is Bill Nighy as Emma’s father. Instead of making him into someone who acts possessive of Emma, or one who serves as a “clam jammer” in her romantic entanglements, Nighy plays Mr. Woodhouse as an absurdly hilarious and mercurial dotard, who loves and supports his daughter unconditionally. He doesn’t stand in her way. He barely stands at all, in fact. When she needs him, he is there, and when he needs attention, he acts out in foolishly charming and silly ways, surely to the chagrin of the house staff.

That leads us to the second superlative element, and that is de Wilde’s direction. Using her experience as a music video maker, she presents the story largely as a giant choreograph, with each player fluidly moving in and out of the scene as appropriate, allowing the human flow to help dictate the humor in the relatively minimalist sets. Don’t misunderstand, the houses and haberdasheries are certainly well-appointed, but they are little more than window dressings for the almost ballet-like blocking and visual humor.

The very first shot of the film tells you all you need to know about the style. At the crack of dawn, Emma goes down to a garden house, with servants in tow. With a meticulous and discriminating eye that would put Madeline Kahn’s orgy selections from History of the World, Part One to shame, she has the workers snip very specific flowers. What kind of smug, superior, aristocratic brat would make people get up this early just to cut flowers? The kind that gives them directly to the future Mrs. Weston on her wedding day, thanking her for being a friend, and at times, a surrogate mother. There’s humor, an expectation of elitism, and the subversion of human kindness. It’s about as note perfect as you can get, and without a clichéd “As if!” or horrible Stacey Dash to be seen. 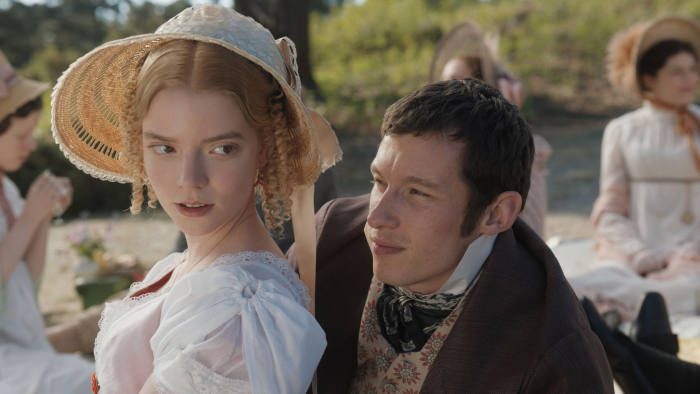 Autumn de Wilde takes the idea of romantic comedy as romance framed within comedy to an almost literal degree with her stage direction and blocking. No better is this exemplified than with Mr. Woodhouse and his constant need for “home remedies.” Exposition and human drama unfolds in the center of the frame while servants scarper along the fringes, setting up draperies and screens to isolate Mr. Woodhouse from any sign of the cold, as he feigns fainting like an American faded Southern Belle, and it works to hilarious effect. And again, the movements are so natural and fluid that it often feels like a stage play where the crew has their own choreography to move scenery around the actors.

There are other fine elements as well. Obviously the costume design is well on point thanks to Alexandra Byrne, who has been nominated for five Oscars and won for Elizabeth: The Golden Age. Part of the fun here is that the designs sort of play into the absurdity of the moments. Particularly, the collars on the men’s suits seem to grow exponentially larger and more dangerously garish as the film goes on, to the point where I feared for Johnny Flynn’s safety by the end. I was sure his collar was going to slice his neck open. Similarly, the score by Isobel Waller-Bridge (sister to Fleabag‘s Phoebe) plays just a little too lightheartedly for it not to be in on the joke as well, which I found rather pleasant.

The script is at times a bit too smart for its own good. There’s an almost anachronistic way that the screenplay seems self-aware. A lot of the fun in the film comes from leaning into the absurdist nature of various scenarios, but the one drawback to it is that the script reads like it’s assigning modern relationship values to the pre-Victorian era. In the here and now of 2020, we know it’s completely foolish for someone like Robert Martin (Connor Swindells) to fall in love with Harriet based on a few passing glances and to propose via letter. It’s equally stupid for Harriet to fall for Mr. Elton (Josh O’Connor) or Mr. Knightley from a few acts of politeness. Trust me, I know. There were some very low years for me in the past where I had to remind myself that women treating me with a basic level of courtesy did not mean they were interested. I could have gotten myself into a lot of trouble had I acted too impulsively.

But those are 21st Century values of courtship and romance. Two hundred years ago, especially among the blue bloods, this sort of thing was normal. Romance was fleeting, but marriage was transactional and lifelong. People were arranged to be together. They didn’t fall in love. Happily ever after was reserved for children’s stories. Relationships were economical.

Part of why Austen’s novel has endured is because it shined a light on this dichotomy, but it also kept itself within Austen’s modern-day reality. Yes, it’s all very silly, but everyone was still susceptible to it back then, including Emma Woodhouse. And in the end, polite society still had to be observed, niceties and traditions continued for their own sake. This leads to another slight ding against the screenplay. Emma is so whip smart, both academically and socially, that when she finally does get a little comeuppance for her cynicism, it sort of comes out of left field. For the most part, she’s too polite, and with the exception of her disdain for Miss Bates and Jane Fairfax (Amber Anderson) – which is typically kept in hushed tones off to the side when she and Harriet are alone – there’s never a believable distinction to when Emma is being facetious and when she’s being genuine, so her snide comments late in the film seem more like an unforced error rather than something that had been building throughout.

That said, I’m glad that the film didn’t go to the Clueless extremes, because Cher Horowitz to me is one of the most shallow characters ever conceived, and Emma Woodhouse isn’t like that. Anya Taylor-Joy does borrow some of Silverstone’s blasé attitude for this performance, but she never devolves into the petulant, entitled, whiny child that Cher was. There’s a good-hearted maturity to Taylor-Joy’s Emma Woodhouse that’s established from the very beginning, using her station to do right by people, even when she sometimes misreads the signs and ends up doing more harm than good. Cher Horowitz was always self-centered and opportunistic, only doing something positive if it benefited her first and foremost. That character is more deserving of the lecture that Mr. Knightley levels at Emma in this film, but again, that’s applying a modern standard to societal norms from two centuries ago. To me, that’s down to the screenplay more than anything else.

Those minor flaws prevent this film from entering the highest levels of 2020 cinema, but it’s still leaps and bounds over everything else I’ve seen so far this year. Anya Taylor-Joy has been slowly building a résumé of solid roles, everything from Split to the transcendent Thoroughbreds, and now she’s on the cusp of being a bona fide A-lister. This may be the breakout role that finally puts her over the top, and if so, I welcome it. It’s rare to see such a smart, funny, and subtly erotic performance, especially in a PG-rated film. With the support of a stalwart ensemble cast and clever direction that plays to Autumn de Wilde’s strengths, she’s certainly made the most of her moment.

Join the conversation in the comments below! What film should I review next? Are you a Jane Austen fan, and if so, how do you feel this adaptation stacks up? Did you have to look up what a “clam jammer” was? Let me know!